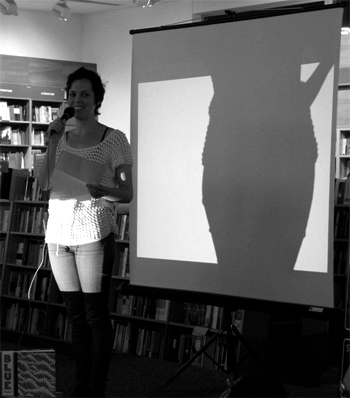 This time last year, I returned to Sydney after almost two years away. For those years, Sydney had existed for me as a terrible video screen, an occasional and discomfiting image through choppy internet connections; or else, as a perfect memory of beauty and hard-angled sunlight. I found myself remembering beaches I’d never been to, or imagining the thick plugs of warm rainforest in middle harbour, as if I knew each inlet and crest. I was aware that this was a fantastic Sydney, one I had drummed up in order to project my uncertain feelings about home. A place I knew to be beautiful – painfully so – and yet a place that had always managed to make itself unavailable, imperceptible. My sense has always been that Sydney is a space that encourages – demands even – forgetting. I do not claim any of my memories; they are memories of forgetting, patched up by secondary materials, scrapped and approximate. Every time I land again I have to construct a new history of being here. I have to begin the archive over.

But what does it mean to write of a city? Certainly, one can’t write about a city, since a city is never quite available as a subject. But one can write of, perhaps in, across, or with a city. Since each is in itself, an abstraction, all cities are the same: they are functionally identical. And yet, any city is a particular city, with specific realities. From this first contradiction – all the cities are the same and all cities are different – there is the second question: What does it mean to write of Sydney?

Sydney is an odd place. Its oddness manifests in its undense and illogical spread across a huge tract of wet, porous, scrubby and hilly land, with water networks proliferating infinite coastline. There is no centre, no flush angle, no punctum. Like all colonised sites, Sydney is an unsettled settlement, crippled by the trauma of its foundational violences and criminal occupation. Though the city today is a place of actual diversity, it self-identifies monolinguistically and monoculturally at the level of media and political representation. (Here, we must recognise the Howard-era rhetoric of ‘tolerance’ in diversity as a markedly monocultural, paternalist, and racist anxiety.) Sydney misrecognises itself, taking ‘global’ as a trademark of a luxury economy of objects, rather than the lived realities of people.

It is, therefore, the broad set of unofficial Sydneys – the tiny cities sharing the same abstraction and the same name – that appeals to me. I am interested in a poetics that emerges from this city-set as an assemblage of processes and events, intensities and densities, solidarities and resistances. I am interested in a poetics that registers, rather than represents, the activity of a city as it is made, unmade, and remade by its minor players. There is no Sydney, only the rabble of Sydney players – and this is its most exciting feature.

In reviewing the submissions for this issue of Cordite, I have chosen a group of poems that suggest Sydney in its excessive discursiveness and insistent phenomena. Many of these poems engage chance- or constraint-based compositional techniques such as collage, cut-up, erasure, deformation, recombination, and/or substitution. With the city as set of minor citylets, the experiences of being-in and writing-from the city-space enable the collective task of appropriation: the city as seed text, the poem as rewrite. These poems engage language similarly: the poems do not claim to possess the language they are composed from, but they are accountable for the language nonetheless. In other words, the poems are not expressions of their makers, nor do they claim fidelity to a particular identity or characterisation. They are collections and arrangements of language, the found and partially perceived materials ‘of’ a certain city. And yet, they are by no means arbitrary, for the fact that the poets are always responsible for the language, for its perceiving, collecting, and for its ultimate assemblage. Too often, so-called experimental poetry is accused of being purposefully and defiantly obscure. Such a charge assumes that there is something being obscured in the first place. But the dichotomy of transparent/obscured is only relevant if we assume that meaning is accessed, rather than made, and that a poem’s business is to grant this access, rather than to facilitate meaning-making. If the poems in this collection are obscure, it is because the experiences of living, writing, thinking, walking, eating, speaking, working and not-working in the city are in themselves thoroughly obscure. One is always standing somewhere, looking somewhere, blocked and blocking the view. To write of Sydney is to write of countless obscurities, dead-ends and blind spots.

Non-possession plus accountability is my chief concern here. To live and write in a city, one must deal with the fact that a city profits from inequity, debt, labour exploitation, and the dodgy racket of land and property ownership. Perhaps the only way to deal with this fact, as a poet, is to renounce ownership and take responsibility. For my own part, poetry provides a way of studying, testing, interrogating and interfering with the linguistic and symbolic processes that become naturalised in praxis. As such, poetry is methodology: a way of working around and against these processes in order to understand the way they affect and are affected in use. The poems in this collection engage different methodologies for approaching, appropriating, reforming, the city. There is, for example, documentary forensics in ‘Sorry’s Essence’, neurotic sublime in ‘Not the Name I Call’, techno-calligrammatics in ‘Transpacific’, poco-eggtart psychogeography in ‘Western Triv’, neo-baroque timewarps in ‘Sweet Meats’, conceptual community-harvesting in ‘Net’, ratbag counter-meal spew-ups in ‘Juvenilia’, and scant lyric motes in ‘Worldless’.

I would like to comment on two recurring tropes in the submissions. For the most part, these tropes surfaced in poems that are not featured in the issue; precisely for this reason, I want to address them here. In the first instance, there were a number of poems that cited an indigenous subject, seemingly for the sole purpose of pointing to indigeneity per se. Such construction, to my mind, only manages vague rhetorical commentary, by way of a reified and poeticised gaze, and the representations that they produce, even when well intentioned, often serve to reinforce interpellations of indigenous subjecthood otherwise reproduced at every level of non-indigenous Australian culture. To be clear: I am not trying to argue for what can and can not, should or should not, pass as representation or identification. What I am suggesting is that the trend of ‘poeticising’ subjectivity in order to symbolise otherness is counter-productive: while it attempts to point to voicelessness or disempowerment, it often does so by affirming voicelessness and disempowerment through voiceless and bodiless avatars. My issue here is with the trend of ‘writing’ legible subjects, who by their rhetorical function are always and essentially other.

And in the second case, there were a number of poems that describe the city ‘as’ a whore, or else metaphorise the experience of being-in-the-city as an experience of prostitution. It is interesting that the particular kinds of alienating intimacies encountered in a city are so often imagined in terms of prostitution: the paradox of feeling violated because of proximate engagements seems to lend itself (however problematically) to this particular analogy. And in many ways, the prostitute figures as a subject intrinsic to the mythology and history of the city. It is also interesting that this analogy deals with a specifically gendered economy. However, that the whore-trope persists in the metaphorical city while discussions of how gendered economies operate in the actual city are chronically lacking, is a problem. There is enough to deal with in talking about women’s bodies and their relation to public space and public discourse, without dragging aged metaphors into our contemporary poetics. This is not a prudish rejection of the figural use of prostitution, as if the charge of prostitution is the issue. Prostitution is not mere metaphor, nor mere slander, but an actual and complexly positioned vocation: one that is so often neglected in discussions of the city and its individuals.

Cordite’s anonymous submissions policy makes for an interesting editorial process. I believe that a poet’s social context matters, since I believe that a poem is never a neutral object. In this issue, I do not know whose work I have chosen. The poems I selected are poems whose language I am willing to be accountable for, whose language has been the germ for my thinking. Part of the great privilege of being the editor of this issue, aside from the immediate pleasures of selection and assemblage, is the opportunity to find relations between poems. Texts, when read together, will form social, referential, and dialogical relationships, and their affinities and disagreements produce shared concerns as well as incommensurate politics. A poetics is an orbit. This collection emphasises something fundamental to the activities of thinking and writing: more-than-one thing will occupy the same signifier, the same position, the same duration, and their co-existence, no matter how paradoxical, is always meaningful. My editorial imperative here is to point, as in an index, to a selection of texts that themselves point to the city’s many city-texts. As is the case with this city, I’m somewhere between the sublimity of excess, and the disorientation of inexactness. I hope you find disequilibrium, too.

This entry was posted in ESSAYS and tagged Astrid Lorange, sydney. Bookmark the permalink.
Astrid Lorange lectures at UNSW Art & Design. How Reading is Written: A Brief Index to Gertrude Stein is forthcoming from Wesleyan University Press. Her poetry books include Eating and Speaking, Minor Dogs, one that made it alike and FOOD TURNS INTO BLOOD. She co-edits SUS press.