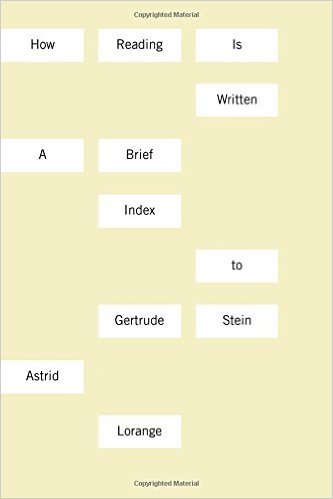 How Reading is Written: a brief index to Gertrude Stein by Astrid Lorange
Wesleyan University Press 2014

Walter Benjamin once suggested that there were two ways in which to misinterpret the writings of Kafka: either by ‘natural’ or ‘supernatural’ explanation. If Kafka’s works have the appearance of parables, the only clue to their solution is that it will be precisely what is not overtly communicated – they are parables, in Adorno’s words, ‘the key to which has been stolen’.

Michael Davidson makes a similar defining remark in relation to Gertrude Stein, which is quoted in the Introduction to Astrid Lorange’s study, and provides a direction for her own approach. The antithetical misinterpretations here are, on the one hand, ‘that her writing is all play’, and on the other that she might be regarded as ‘a kind of hermetic Symbolist’ whose work encodes biographical or other contextual information. Both Kafka’s and Stein’s works might be viewed as ‘autonomous’ in the self-sufficiency of their semiosis – however, just as apparently journalistic works of Naturalism are the result of deliberate stylistic fabrication, even the most abstract and anti-referential literary texts are ultimately grounded in the description of empirical and historical reality: so the negative dialectic implodes. It is on this point that one might locate a distinction between ‘modernist’ and ‘postmodern’ approaches, which has nothing to do with periodisation (although Davidson’s statement, made in a 1978 issue of L=A=N=G=U=A=G=E, marks an important historical moment for Lorange’s positioning of Stein). Unlike her Anglo-American contemporaries, Stein’s work – like that of Samuel Beckett who is in many respects her chief inheritor – doesn’t rely on a grounding foundation of myth, classical precedents, or Renaissance Italian history. The ‘surface’ meditation on language as a reality in and for itself is sufficient: in Beckett’s words, ‘Beyond what is said there is nothing’. But at the same time, the notion that literature could follow art into abstraction (whether or not visual art can ever be ‘abstract’ in its emulation of natural forms) is an obvious fallacy: words continue to denote, no matter how far they are pushed along Valéry’s axis of ‘sound’ over ‘sense’. And the insistency with which Stein presses non-referential words – prepositions, conjunctions, articles – provides an exemplary limit-case that only serves to prove this fundamental point: words are not paint, and can never wholly aspire to the condition of music.

What is instead being foregrounded in these texts, as Lorange very convincingly demonstrates, is the process of a composition that is continuous and multiplicitous in its self-invention. An analogy might be made with sketching: Stein is exploring a form of language construction, or indeed a way of thinking (a ‘writing mind’), that can be manifested only through the act of composition itself. Lorange’s extremely thorough account examines this central issue in ten compact and intricately woven chapters that situate Stein in relation to a wide range of theorists, who are pertinently summarised. As she notes in a concluding statement: ‘Stein’s work is an example of a long and diverse strand of writings and thinkings concerned with mobility, relationality, process and transformation’ (p.246). These most obviously include the philosophy of Henri Bergson: Stein was linked to Bergson by Mina Loy (whose own work is more identifiably Bergsonian), and this connection provided the basis for a notorious critique in Wyndham Lewis’s Time and Western Man. It also includes her teacher, William James – and there has been speculation since the 1930s regarding the extent to which his ‘automatist’ experiments directly influenced her writing – as well as more recent philosophers who might be associated with a ‘Vitalist’ revival, in particular Gilles Deleuze and Bruno Latour. But the central thread of Lorange’s argument, and perhaps its most original contribution, is to focus attention on the process philosophy of Alfred North Whitehead, with whom Stein had a direct and admiringly personal association from around the end of the First World War. Although he acknowledges the influence of both Bergson and James in the Introduction to his major 1929 work, Process and Reality, Whitehead’s relational metaphysics extends their vitalistic philosophies in radical ways that coincide with the discoveries of the new physics. Like Bergson, Whitehead opposes a mechanistic order of spatial measurement to a temporal consciousness that exists in processual duration. But Whitehead’s anti-mechanism leads him to propose a thoroughly active universe of incessantly interrelating forces, which are gathered by the (poetic) mind as ‘a manifold of prehensions’ (Shelley and Wordsworth are cited favourably for their powers in this regard).

Lorange brings Stein into intersection with Whitehead from a range of sharply-observed angles that are especially attentive to the correspondences between form and content in her work: both writers, she notes, share a preoccupation with ‘rhythm, the multiple relations of an event in its temporal and durational continuation through which variations and modifications produce new states and conditions’ (p.26). These correlations are evident in her chapter on ‘Grammar’, in which it is noted that ‘the adverb, as a grammatical function, is a key concern of Stein’s poetics’ (p.112). Whitehead’s philosophy can be viewed as similarly ‘adverbial’ in its description of experience as a process of becoming, and Lorange expands on this idea to assert that ‘conjunctions and prepositions can be said to operate adverbially, since they emphasise relationships of context’. Stein herself agrees: as she writes in her own essay on the subject, ‘Poetry and Grammar’, ‘I recognise verbs and adverbs aided by prepositions and conjunctions with pronouns as possessing the whole of the active life of writing’ (quoted p.117). In other useful chapters, Stein’s famous statements on contemporaneity in ‘Composition as Explanation’ are considered in the light of Whitehead’s theory of our emotional reception of ‘presentational immediacy’ (the given world); and Stein’s technique of repetition is reevaluated alongside Whitehead’s startlingly Heraclitean pronouncement: ‘Experience involves a becoming, that becoming means that something becomes, and what becomes involves repetition transformed into novel immediacy’ (quoted p.216). This is an admirably lucid book in organisation and idea, and Lorange is to be forgiven her occasional lapses into Steinese: as she rather beautifully puts it, ‘Stein’s poetics is riddled with riddles, but the riddles rarely yield revelation’ (p.185).