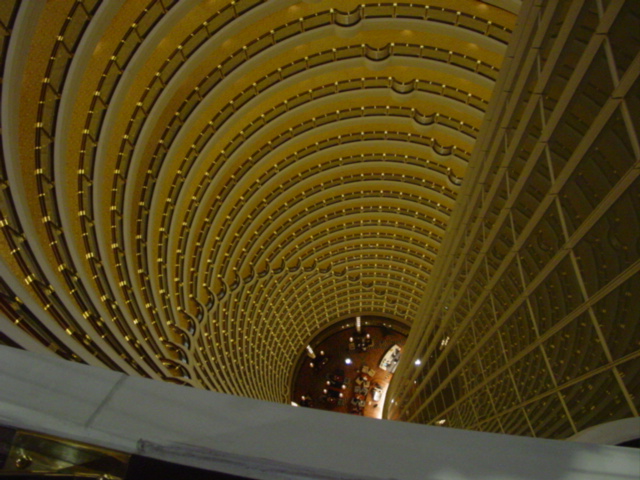 For 14 days over Christmas 2001-2, I spent time with friends in Taipei, capital city of Taiwan. These are some brief impressions of my time there. Quotes are from work in progress.

Taiwan was originally settled by peoples who are now labelled 'Aborigines' – not Chinese, but Pacific peoples, kin of the Hawaiians, it is thought. The island (whose name means 'western platform' in Chinese) is still a crossroads of peoples, if no longer completely beautiful. Its capital Taipei is filled with traffic, pollution and the everpresent smells of sluggish drains, cooking and breathless smog. Sinus and breathing problems are common.

Taipei is not a beautiful city. It is office towers and living quarters stacked together, neon and crowds, anarchic traffic flow. It is continual movement. Every three days, some place on the island experiences an earth tremor or quake, as we did one morning in our friends' apartment, 15 storeys above the street.

The east of the island is mountainous and beautiful though I only know this second-hand. I fell ill and missed the journey my friends made to the marble-sided gorges, solitary temples on hillsides and the Aboriginal peoples contained by poverty and the culture of 'culture', churning out souvenirs woven from their ancient patterns.

In the end, I remained in Taipei, modern in its hype and hum but also a place for tradition, where street sellers write with ink and brush between serving customers, an old woman sells steamed sweet potato wrapped in newsprint to young locals dressed in the latest DKNY and everyone seems to know the most auspicious date on which to conduct a meeting or a marriage.

Sun, brazen in pollution
sinks between two worlds
plump with the heat
it has sucked from us.
In the markets of bone and thought
skinned frogs, white geese
ten thousand fungi in plastic bags
the sing-song carts or a picture of your name
carved in million year-old marble
waits for the deal.

One afternoon my friends and I had a two-hour political converation with one of the locals over the highly valued and expensive local oolong tea in his favourite tea shop. The tradition of using a simple, small red ceramic teapot stuffed with tea leaves which are reused a number of times as the conversation continues is called 'old men's tea' ceremony (lao-jen ch'a). Oolong, or Black Dragon (Wu-Lung) tea is partially-fermented tea grown in great quantities on the island. It is usually a golden or sometimes reddish colour, astringent to the taste though with a hint of sweetness and never ever drunk with milk or sugar. As for the chat, politics is important when mainland China looms just across the sea and makes warlike noises from time to time. But our conversation is also peppered with September 11 references and the rest.

Booths of diviners line the covered alleys near Lungshan Temple where old men and women gather over scriptures and pray to the goddess of Mercy in the main hall and Matsu, goddess of the sea, out the back. In another quarter we find a newer temple in a street filled with the showrooms of coffin and urn makers. The temple is crowded with the young and the business-suited.

The National Palace Museum holds some cultural clues, as you'd expect. In a room of ancient bronzes the exhibition captions are concerned only with the inscriptions, a form of writing that can still be read by Chinese today, after three or four thousand years. There is almost no description of the objects themselves, materials or context, outside of the words inscribed on these ritual vessels, musical instruments, and weapons. The words are central. Chinese is the only major writing system of the world that continued its pictograph-based development without interruption and is still in general modern use. The characters incorporate meaning and sound as well as visual image. In another room of this most extraordinary and culturally dense museum, are the famous oracle bones, mainly tortoise shells or cattle thigh bones, on which diviners marked the questions of kings and the answers they received.

What seems to be preserved and valued are the word, as image, as magic, ancient codes still understood. The diviners I see near the old temple use a small tortoise shell (a still potent symbol of long life, the 'ten thousand years' of ancient sayings and inscriptions), turning it like a top until it settles on an answer or sign. Many shops still sell both cheap and extremely expensive bamboo handled brushes, inks and black heavy inkstones for writing.The four items indispensable to any traditional Chinese scholar are a brush pen, an inkstick, paper, and an inkstone. They are the main tools of literary and scholarly work.

But maybe this is all tourist blandness. So what of poetry? My search for modern Taiwanese poetry, in fact, does not get far and I have to wait till I get back home to turn up something. There are English language books in Taiwanese book shops but there is very little modern Taiwanese literature available in translation. I guess I thought it would be easy but all I manage to turn up are some translations of the Chinese classics or a few books by one of the most well-known modern Chinese poets, Bei Dao, who, of course, is not from Taiwan but from mainland China and now lives in exile in the USA. I presume that, because Taiwanese does not have a standard written form, it has also set a barrier to literary production despite the fact most Taiwanese speak and write their own form of Mandarin.

Sirens and cock crows
the chaos is the way things fit together
when the edge is in the midst
as taxis and scooters
brush by but don't touch.
It's all our crazy timing
it is work humming
membrane of buildings.
Water drips down the tiled exteriors
form clings to the breath
of the republic's citizens …

There is now a book available in the USA, published in 2001, called Frontier Taiwan: An Anthology of Modern Chinese Poetry edited by Michelle Yeh and N.G.D. Malmqvist (Columbia University Press). According to Yeh, although poetry in dynastic China was a central artistic pursuit it required a sophisticated knowledge of a complex language form and was practiced by those we would term elites. In 1917 Hu Shi (1891-1962) began publishing a 'modern' style of Chinese poetry that challenged all that. His eight guidelines became a manifesto not unlike the Poundian advice to 'make it new.' For example: 'Do not imitate the ancients', 'Get rid of cliches and formulaic expressions', 'Do not avoid colloquial words and expressions', etc. The 50 Taiwanese poets in the book apparently follow that Chinese modernist advice. The editors also claim they represent a society that is more multicultural than the mainland, writers influenced by China, Europe, Japan, America, and the original Austronesian peoples.

Last year Taipei hosted an international poetry festival. It was held around mid-September, unfortunate timing, so that some overseas guests did not make it or were late. The special guest was reported to be Derek Walcott but I have not yet been able to find out if he ever got there. One issue of the Taipei Times mentioned that restrictions on flying after 11 September had delayed his arrival but there was no further information. I visited the newly opened Taipei International Artists Village only a few blocks from the city centre near the main railway station and bus interchange. The Project Officer there told me that a poetry festival was again planned for this year and that the Taipei city government wants to encourage overseas artists, including poets.

Oh that they had been available in the many bookshops I visited!

This entry was posted in ESSAYS and tagged asia-australia, Jill Jones, Taipei, Taiwan. Bookmark the permalink.
Jill Jones was born in Sydney and has lived in Adelaide since 2008. Recent books include Wild Curious Air, winner of the 2021 Wesley Michel Wright Prize, A History Of What I’ll Become, shortlisted for the 2021 Kenneth Slessor Award and the 2022 John Bray Award, and Viva the Real, shortlisted for the 2019 Prime Minister’s Literary Award for Poetry and the 2020 John Bray Award. In 2015 she won the Victorian Premier’s Prize for Poetry for The Beautiful Anxiety. Her latest book is Acrobat Music: New and Selected Poems, published in late 2022. Her work is widely published in Australia and internationally and has been translated into a number of languages, including Chinese, French, Italian, Czech, Macedonian and Spanish. She currently writes and teaches freelance, and previously has worked as an academic, arts administrator, journalist, and book editor.