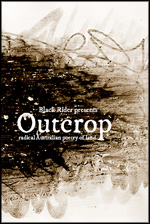 As I write this review, sunlight filtered through a pall of smoke casts a dull orange glow over my kitchen bench. The Blue Mountains are burning. Sydney’s haze resembles downtown Beijing’s and it’s only October. Such an apocalyptic scene – part of the ‘Australian experience’ I am assured by our Prime Minister – provides context for the world into which Outcrop and its ‘radical poetry of land’ emerges. This is not to suggest that the anthology’s outlook is primarily environmental, but that alternative ways of examining land are sorely needed.

On the whole, Outcrop, compiled by Corey Wakeling and Jeremy Balius, is experimental – a distinct and welcome contrast to an often straight-forward field. Sadly, Wakeling’s editorial lacks the clarity of the subtitle’s territorial claim. His scholarly credentials are not in question, but his opening remarks resound with statements so close in meaning that a PhD seems necessary to distinguish their nuances. At times his stated territory becomes so inclusive as to seem self-contradictory, for example:

‘Moreover, the ecological itself disturbs the primacy of the figural image when its concerns are micro as well as macro, disguised as well as visible, and subsistent as well as existent.’

But this does not detract from the importance of the works, all of which invariably, as Wakeling notes, ‘express[es] a crisis in relation to land.’ He continues, more directly:

‘This collection believes in not only poetry’s potential for critique and dissent, but too the possibility of recuperation and efflorescence of land’s multiplicity in a theatre of language. This theatre of language may entail utopia or dystopia, realism or surrealism, but I feel more so that this collection in its radicalism welcomes the gamut of these contrary forces.’

The poets chosen to represent such a gamut range from more established writers – such as John Kinsella and Jill Jones – through to the emerging voices of Astrid Lorange and Tim Wright. Such a balance feels natural rather than conceited, and the anthology is accordingly language rich.

Reading the works as a whole confirms that its radical nature does indeed stem from an opposition to the singularity of traditional landscape writing where a defined self is interwoven with a defined locale. Some poets, the polychromatic Kate Fagan for example, do at times engage skillfully and satisfyingly with this mode:

What works best about this collection, overall, is the sense that the poems consistently address the conundrum of human presence, whether by embrace or rejection, and this lingers over every experience of land. Land, as presented or obfuscated in these works, is never virgin.

Keri Glastonbury navigates this zone in ‘local/general’ as she conjures up a paean to Sydney’s urban beachscapes where Baudelaire’s mirror for (hu)man’s soul, meets pollution and contemporary kitsch:

In its evocation of vernacular and place, its mixture of the colloquial and the sublime, Glastonbury’s poem strikes me as a uniquely Australian expression of land. There are echoes of this in the more reticent poems of Tim Wright and Michael Farrell’s elegant and fundamentally subversive pastorals, especially ‘Motherlogue’ and ‘Once or Twice or Pretty Boy Swag’, which seemingly tap into his rural upbringing: ‘Nice little herd of pigs you got, he / says stroking the dead lamb in his lap.’ (‘Motherlogue’) Then there is the almost incomparable Duncan Hose’s neo-colonial reimagining of 19th century Australian ballads.

I remember hearing Hose read his award-winning poem ‘The Allegory of Edward Trouble’ at the 2010 Newcastle Poetry Prize ceremony and was struck by the audacity of the poem’s ambit claim over the Ned Kelly legend. That poem is not included here. Instead, he expands his poetry into an early glimpse of a globalised Australia:

That said, Australian-ness is not what binds these works together. The experimental and, generally, minimalist work of poets like Pete Spence or Nicola Themistes sadly labour under a manufactured intensity lacking the alchemical transformation that takes place in the poetry of, say, John Ashbery … though perhaps a more apt comparison is to the American poet Lisa Jarnot’s disruptive verse. I could not discern whether Themistes’ overwrought ‘Kinsella’ was ode, parody or pastiche while Spence’s ‘Crab. A tantrum. Oh!’ reads as though the glue has not yet dried:

The imagery is clever rather than synergistic and the affect is accordingly muted. Astrid Lorange, one of the many fine younger (women) poets included in the collection, pulls off such disjunctions with a greater degree of mastery and conveys her version of land as linguistic playground: ‘we push goats towards the earth and the goats / feed on calligraphy, stones and bread’ (‘Song Goat’). More sober in approach are John Mateer, Louis Armand, Peter Minter and John Kinsella whose meditative poems pose fundamental questions about post-colonial and destructive relationships to land and ecology. Though their worldview feels at times heavy-handed, lacking the humanistic balance found in works such as Glastonbury’s, I still find myself drawn to observations like Louis Armand’s ‘Realism. Four preludes.’:

Humanism never lacks in the work of Ali Cobby Eckermann and Lionel Fogarty, the two indigenous poets included in Outcrop. While Eckermann is more contained in her poems and Fogarty has a dynamic, urban sass, both poets bridge ancient and spiritual connections to land and contemporary, socio-political consciousness. Eckermann writes: ‘I drink in the street / Ask for money each day / Intolerance is free.’ (‘Faiku’).

Her dream-like work distills a deeply personal (but not biographical) experience of land – its fragility, mystery and randomised order. It is, like that of many other included poets, fantastic work and a sure sign that the editors’ desired ‘efflorescence of land’s multiplicity’ has indeed come to pass in this anthology.