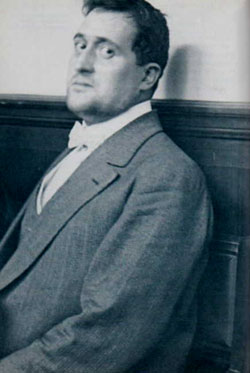 There are too many things to say about Guillaume Apollinaire’s ‘Vendémiaire’, and all of them must be said at once. The title is the name of the first month of the French Republican calendar (1793-1805; 1871), which was taken from the Latin vindemia, ‘grape harvest’. The common term in modern French, ‘vendange’, stems from the same Latin word. ‘Vintage’ technically expresses this sense in English, though it is unfortunately obscured by other ones. Another possible rendering is ‘The harvest month’. The poem was first published on November 10, 1912 in Les Soirées de Paris, a journal Apollinaire founded with four colleagues. It was the first of his works to be stripped of its punctuation for printing. Around this same time the proofs of his first collection Alcools, which ‘Vendémiaire’ concludes, were similarly treated. The book appeared in April the following year. ‘Zone’, the more famous poem that opens Alcools, was published in the same outlet a month after ‘Vendémiaire’. Although the two poems echo one another in numerous ways, they were not written at the same time. ‘Zone’ was composed in 1912, while ‘Vendémiaire’ may have been composed as early as 1909; no exact date has been established.

In terms of prosody, ‘Vendémiaire’ is in an open relationship with the Alexandrine. Apollinaire extended the practice of vers libre, but, in line with his view of history discussed below, he also continued to write in formal verse. ‘Vendémiaire’ orbits the Alexandrine elliptically, moving away from and toward it continually. Its rhyme initially follows the classic couplet, but soon becomes liberal and opportunistic; similarly with the caesura. What is so impressive about this is not how it’s a heroic step in overcoming the traditional line, but how, careering through the cosmos in a state of total intoxication, Apollinaire managed to fit so much of his effusion into the out-dated form. Such fluid use designates the form as out-dated, as something to be taken up or left behind according to the artist’s needs: he relies on it for pace and driving rhythm but refuses to let it halter the vital pulse of being he gave himself up to. This is particularly patent in the last of the poem’s long stanzas, where it becomes a kind of geyser, spouting in a rhetorical list all the other things offered in wine plasma by the provinces and imbibed by the poet. The absence of punctuation works in concert with this tendency: without it, the individual words bulge with all their possible meanings (occasionally giving the would-be translator migraines), straining to breach their static scriptural form, the lines unbridled by stops and commas teem and race down the page in a dionysiac cascade.

The poem both binds and detonates myth, history and the contemporary in the timeless and limitless present of the poet’s own ecstasy. But this experience is framed in the passé simple (preterite or past historic), which is only a written tense, used for the recounting of stories and for works of history, presenting actions that are complete and, grammatically speaking, detached from the present (i.e. ‘One night …’). This duality is also reflected in the action of the poem, where a moment of ecstatic union with the cosmos, which amounts to the obliteration or consumption of mundane, historical time, must yet manifest itself in the form of a linear anecdote about the series of offerings rendered one by one in song by the provincial cities. The tension in this structure was established in the writing of the poem, and is maintained in perpetuity by our moving through it as readers. It is further complicated by the elision of the reported speech of the cities and the poet’s own voice, encouraged by the absence of punctuation. The poem is a song of how all things enter into and pervade the poet, whose voice becomes the world. Even as he tells us he heard voices, he is at the same time the literal vehicle of their songs, just as we readers are in turn the vehicle of his. In the five brief penultimate stanzas Apollinaire enters into the time he’s recounting and speaks from it in the present tense.

Such structural issues are not merely of pedantic interest, for they mirror some of the poem’s central themes, in particular its treatment of history. For all Apollinaire’s revolutionary modernity, his attitude to history in ‘Vendémiaire’ (and ‘Zone’) cannot be aligned with the rhetoric of the Futurists, Dadaists and Surrealists, all of whom indulged in polemics against history as such. His ally is Delaunay, not Marinetti. Apollinaire was (wrongly) imprisoned for stealing the Mona Lisa, and Rumourpedia reports that he once called for the Louvre to be burnt down, yet the attitude present in ‘Vendémiaire’ is nevertheless incompatible with the Surrealists’ declaration of an insurrection against history as well as with Marinetti’s desire to see all the museums and libraries demolished. A futurist ‘Vendémiaire’ would tolerate no mention of the courtly tradition of medieval Brittany and Lyons, nor of the countless generations of warring monarchs and scheming cardinals, nor of figures from Greek myth. If Apollinaire testifies to the experience of the fact that, as Marinetti has it, ‘we are already living in the absolute,’ he does so not by abolishing history, but by acknowledging how the present is suffused by it. Without history having recapitulated itself in the present, without its achieving a virtual presence in human self-consciousness, the absolute in which we are already living wouldn’t be absolute. What occurred on the planet sequentially becomes present simultaneously in the poet’s self-conscious limit experience. As such it becomes a living part of – rather than something diametrically opposed to – the contemporary individual; it no longer stifles creative life and need no longer be abolished. The sacrificial rite staged by the poem enacts this relation: all the blood of history becomes an offering to the contemporary metropolis, even though that metropolis is akin to a futurist, viz. boisterous, noisy, hubristic, rapacious, obsessed with speed, engines, and power, and indifferent to its provenance.

The living vine is the vine of human life and is eternal (cf. John 15:1-6). For Apollinaire the modern period is not the absence of history but a time in which one may be maximally aware of the vine’s longevity, of just how many seasons of grapes have been senselessly burst, and of how all of that, led to this. If those in the city are rushing about, it is because history, an immane reserve of misery, accident and language, is already pushing them forward. They, along with everything about them, are its botched result, whether they spare a thought for it or not. The present is drunk on an excess of history.

Apollinaire’s response to this is not to become blasé, nor to attempt an historical detox on himself or his time, but to souse himself and his song in it as fully as possible. History may seem to be present in the poem in a mythical way – the mythologies of various historical traditions that Apollinaire channels all form a part of the harvest (just as their relics are heaped up in the city’s museums) – but this shouldn’t take away from the breadth and sobriety of his historical vision. Apollinaire isn’t just drunk on myth and imagination, he is also paradoxically intoxicated by reality, memory and the historical record.

In addition to this historical aspect, Apollinaire’s mystical rite displays a trenchant geographical and political-economic verisimilitude. The poem represents modern commodity production and market exchange as a spectacle (one that Apollinaire, as a cosmopolitan consumer, beholds and enjoys), but it also mimetically enacts it, for this representation is itself only given to us through the spectacle of the poem’s sacrificial rite. Poetry becomes the mimesis of the whole commodity economy, rather than just a small part of it, or something smugly external to it. In line with this, the poem demonstrates that the experience of the urban subject doesn’t just involve strolling freely about the streets consuming goods and feeling their effects while beholding the marvels of modern industry from a safe distance, it also involves the entire system of commodity production and exchange, a process that no corner of the nation or even the continent escapes. (In our time, such a drama is obviously global, but the structure is much the same.)

Pages: 1 2 3
This entry was posted in ESSAYS and tagged Guillaume Apollinaire, Marty Hiatt. Bookmark the permalink.
Marty Hiatt is from Melbourne. He most recent chapbooks are the manifold, hard-line, and festivalize this.