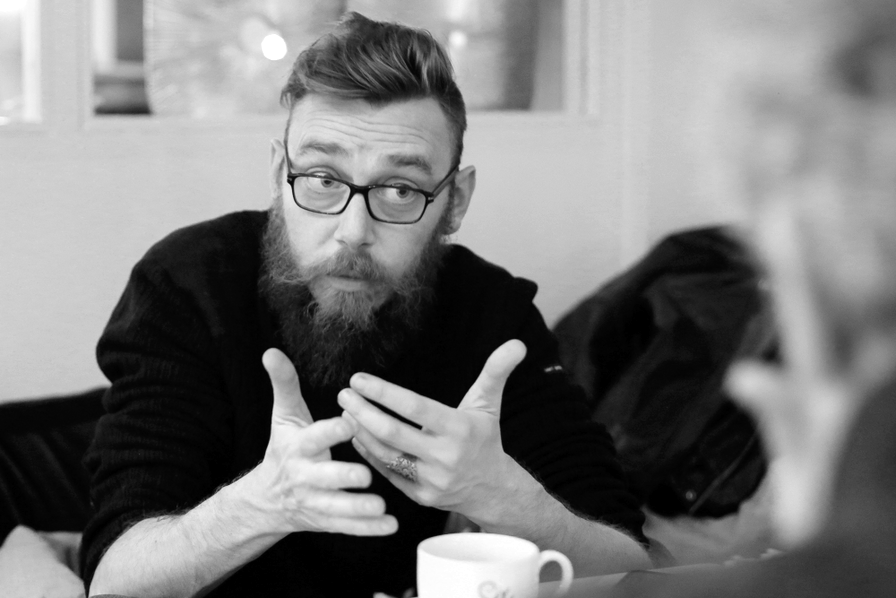 It is a rare thing indeed to be entrusted with the translation of such a startlingly original work as Joseph Ponthus’s À la ligne.

It is a work that bears reading and re-reading. A work that stays with you.

Unable to find work in his chosen field, Joseph Ponthus enlisted with a temp agency and started to pick up casual shifts in the fish processing plants and abattoirs of Brittany. On the Line – Notes from a factory is his attempt not just to record but to process the horror of what he witnessed, to accord it some meaning, to allow him to find its place not only in his own mind but also to invite us, his readers, to bear witness to the monotony of the processing machine, the broken bodies it leaves in its wake, while inviting us into the dark recesses of the mind where the human spirit is struggling to adapt, hoping perhaps to survive.

French author Céline Curiol writes in her recently published novel Les Lois d’Ascension (Actes Sud, 2021) that ‘nobody can survive without imagination…’, and Ponthus’s extraordinary work might be understood as the author’s attempt to imagine his survival in these most inhuman of environments, through his writing.

We are allowed a way in, if you like, through Ponthus’s title, À la ligne, a clever double entendre referencing not only the production line but also his persistent ‘return’ to a new line with each new phrase, eschewing punctuation.

Ponthus returns to a new line, as he returns to the factory, producing a rhythm that matches the relentlessness of the production line. Yet it is a technique that also allows the creation of a visual space on the page which, in turn, might be seen as reflecting that place of grace, that mental and spiritual retreat which somehow allows us to preserve our humanity and continue to engage when confronted with such challenging circumstances.

In a film shown at a recent retrospective of her work at the Museum of Contemporary Art in Sydney, artist Lindy Lee comments—and I paraphrase—that the brain only knows what it knows. As humans we are constantly trying to make sense of, to process, our environment. Perhaps the very essence of the human condition, the human contradiction, is the fact that the human mind is capable of reeling before the beauty of Apollinaire’s words, before the wonder that is Bach’s St Matthew Passion, and yet may still be called upon to reconcile not only body but mind with the horror inflicted by wars, with the mindlessness of work on the production line, with the slaughter being carried out in our abattoirs. While compelling us to acknowledge the imperatives involved in the human processing of other animals, Ponthus also forces us to engage with the underlying inhumanity of our exploitation of human capital in this process. His gaze is uncompromising, his words remind us of our complicity.

As a translator, one is also constantly called upon to challenge what it is the brain knows. Our mind is constrained by the familiar, and yet we must suspend our disbelief and attempt not only to hold a mirror to the words, but to record the shifting rhythm and acoustics of rage and exhaustion, of humour and pathos, of dignity and indignity. And, in this work more than most, the sound of our (in)humanity.

In an inconceivably tragic turn, Joseph Ponthus died earlier this year at the brutally young age of 42. Fortunately, he lived to see the recognition awarded him in France for this unflinching and original work. À la ligne was awarded the Grand Prix RTL-Lire, the Prix Eugène Dabit du roman populiste, and the Prix Régine Deforges, among others.

Pages: 1 2 3 4
This entry was posted in TRANSLATIONS and tagged Céline Curiol, Guillaume Apollinaire, Joseph Ponthus, Stephanie Smee. Bookmark the permalink.
Stephanie Smee left a career in law to work as a literary translator. Recent translations include Hannelore Cayre’s The Inheritors and The Godmother (winner of the CWA Crime Fiction in Translation Dagger award), and Françoise Frenkel’s rediscovered World War II memoir, No Place to Lay One’s Head, which was awarded the JQ–Wingate Prize. Her translation of Pascal Janovjak’s The Rome Zoo is forthcoming.


More by Stephanie Smee on Cordite Poetry Review →
Joseph Ponthus (1978–2021) worked for over ten years as a social worker and special needs teacher in the suburbs of Paris. He was co-author of Nous … La Cité [The Suburbs Are Ours] and his masterpiece À la Ligne [On the Line] was published in France in 2019 to great acclaim. It won several literary prizes, including the Grand Prix RTL/Lire and the Prix Régine Deforges, and became a major bestseller.