‘To the edges of language’: Souradeep Roy in Conversation with Mani Rao 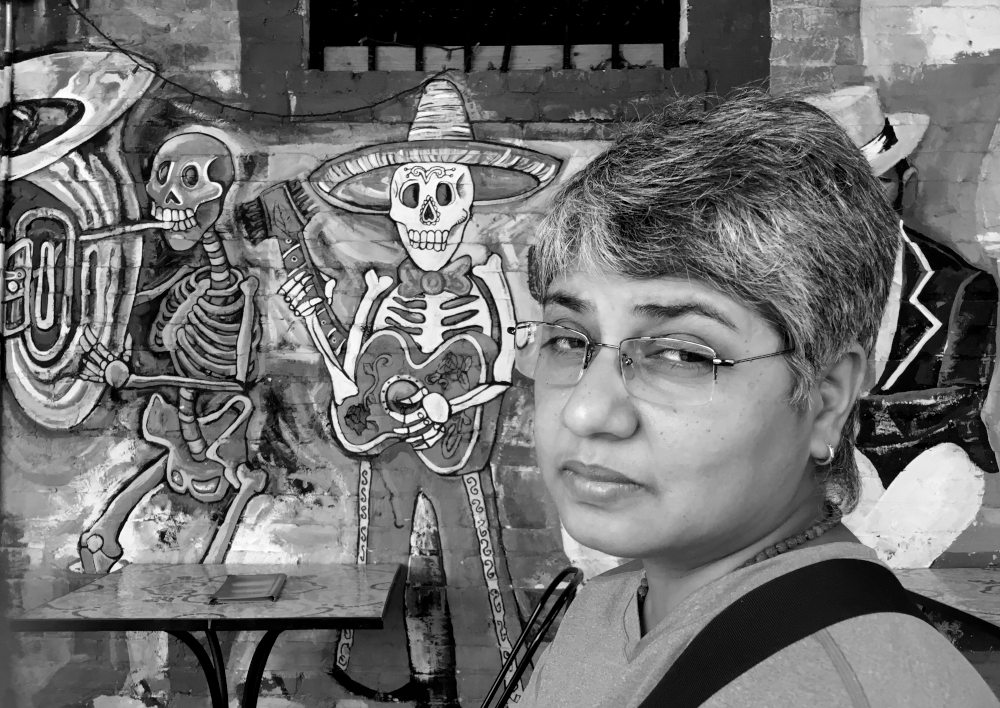 This interview with Mani Rao took place over several emails alongside an a necessary-extended phone conversation during this ongoing pandemic. Before this interview I had read Rao’s work seriously for the first time with the Delhi Poetry Reading Group in 2015 and subsequently met Rao at the ‘Almost Island’ conferences in 2018 and 2019. In India, Rao has mostly been known as an experimental poet and a translator from classical Sanskrit. If a singular, intriguing voice is experimental, Rao is certainly an experimental poet who does not fall back into the easy lyricism that is so common in contemporary poetry. Rao’s lines are sharp and incisive. They stretch sound and the visual shape of the poem to the edges of language.

In the first part of the interview, we discuss Rao’s brilliant translations from Sanskrit to English of two works: the Bhagavad Gita (2010) and Kalidasa for the 21st Century Reader (2014). Both translations have a dramatic quality, which we discuss throughout this interview. By dramatic, I refer to T.S Eliot’s idea of the dramatic voice explored in his essay: ‘The Three Voices of Poetry’. Rao began translating later in her writing career when she was pursuing her MFA, that also included translation studies. I believe that it’s at this juncture that a link was forged between Rao’s work as a translator and a poet. It is a bridge that connects her choices, and a bridge that calls for a comparative critical eye (and ear) of future readers. The following conversation, will, hopefully, lead to such critical and creative engagements.

In the second part of this interview, I was able to discuss Rao’s earlier works such as: Wingspan (1987) and Catapult Season (1993). The voice in Rao’s earlier works, including Living Shadows (1997), The Last Beach (1999), and Salt (2000) finds its culmination in the stunning sequence, echolocation (2003). echolocation was followed by Ghostmasters (2010), a collection where Rao’s voice underwent subtle changes. The full range of this new voice, a more detached, calmer, but equally fierce voice is exemplified in Rao’s latest chapbook, Sing to Me (2019). Rao’s first two books, aforementioned, have hardly received the attention they deserve – and so I’ve chosen to discuss specific poems from these two collections. Besides the shameful neglect of Rao’s early work, there is also a thematic reason for discussing them. Rao’s early work allows for an exploration of the abject.

‘When I am beset by abjection,’ Julia Kristeva writes in Powers of Horror (1980), ‘the twisted braid of affects and thoughts I call by such name does not have, properly speaking, a definable object.’ The abject, that is frequently seen in the images of blood, death – what I call ‘macabre’ while discussing the early poems in this interview – is not the object which, through its opposition to me, settles my desire for meaning, for knowing who I am. The abject, like the object, is opposed to the ‘I’, but, unlike the object, its opposition is not as clearly defined. Kristeva likens this as ‘the jettisoned object’ that is ‘radically excluded’ and ‘draws me toward the place where meaning collapses’. Rao’s early writing demonstrates her commitment to explore abjection: both its seductions and repulsions. Perhaps this is why Rao frequently stretches language outside of its usual contours of meaning, and, in her early works, also falls back on another language altogether: visual art. The pleasure in reading or seeing Rao’s work, as a result, comes precisely because of the difficulty in finding meaning in her poems. Formally, Rao’s poems resist easy determinations of meaning, not simply because every poem resists a common determination, but because her poems explore the impossibility of meaning itself. This tradition of writing, including poems such as Adil Jussawalla’s ‘Missing Person’, and some of Arvind Krishna Mehrotra’s early work like ‘Songs of the Good Surrealist’, has not been explored enough in the Indian-English poetry tradition.

Though Rao does not characterise her own work in the same way I interpret her poems, a discussion on her earlier work, as this interview demonstrates, makes a good case for such a reading. In Rao’s later work, especially in the new chapbook Sing to Me (2019), we find a brilliant treatment of ‘the myth’. Two reasons could be attributed to this. One, the influence of Rao’s translations into her own poetry, and two, a shift away from the treatment of the abject into a treatment of the object. Myths are, after all, pre-existing symbolic structures. Unlike the abject – always outside the purview of meaning – they already carry meaning, which Rao reinterprets with her singular vision and style.

Souradeep Roy: I feel there is a dramatic quality to your translations. By dramatic I don’t mean high drama, but the quality of dialogue in plays, which switches between various registers of speech. This is obviously the case of plays you’ve translated but also of epic poems, like the Bhagavad Gita, which is technically not a play …

Mani Rao: But the Gita is actually a dialogue between two characters. The stage is the battlefield as well as the entire context of the conflict and tension between the two warring sides. And there is tension in Arjuna’s situation – to fight or not to fight – I guess the only thing missing is ‘action’ (smile). But before the teaching begins in the Gita, there is a fair amount of drama. And the interaction between Arjuna and Krishna – the words they exchange – expresses their personalities and their relationship. If we only think of the Gita as a teaching, much of this other fun is lost.

SR: Let me explain this with examples from the poems. In the Gita, after Arjuna’s makes his case against fratricide, Krishna says, ‘nice speech Arjuna but …’

MR: At that point in the Gita, Arjuna has just completed a rant. He has laid out the potential consequences of war, spouting doctrine, but he is full of self-pity and has described his own state – how his hair stands on end, his tongue is dry, his bow has fallen to the ground, etc. Krishna responds by mocking Arjuna.

When one translates the line from Sanskrit literally, we get ‘you speak wise words Arjuna’ – and (funnily) some translators do actually use exactly those words. But Krishna is not appreciating Arjuna for his wise speech, he means the opposite, he mocks Arjuna, suggests that Arjuna is far from wise. I hear a clear tone of laughter and mockery there: ‘prajñāvādām ca bhāṣase!!!!’ What a loss if we miss the innuendo in this response and instead make it sound solemn! I mean – I think I am simply following the tone of the original. Until about here in the Gita, the verses are dramatic, it is only after this the content becomes semi-philosophical. It would have been a shame to lose the humour. Here’s how I translated the stanza:

Pages: 1 2 3 4 5 6
This entry was posted in INTERVIEWS and tagged Adil Jussawalla, Julia Kristeva, Mani Rao, Souradeep Roy. Bookmark the permalink.
Souradeep Roy is a poet and translator. His latest work is a part-translation, part-original play emerging from his experience of mental illness, A Brief Loss of Sanity that appeared in the bilingual online journal, Kaurab. He lives in London and Calcutta.