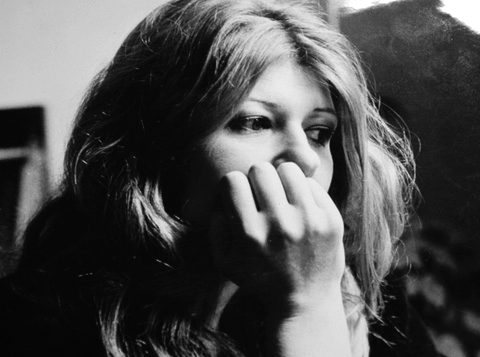 Danielle Collobert’s Survie is a sequence of six sonnetoid poems written and published in 1978 shortly before her suicide. The title is ironic: ‘survie’ means either the state of remaining alive after an event or in an environment that is normally fatal. As with ‘survival’ in English, the meaning of the term is commonly extended to mean a precarious living situation. The texts proclaim and enact a textual suicide that paradoxically must precede the real event; they are a kind of war waged in language by an embodied self against language. Danielle Collobert writes Survie to survive suicide, and suicides to survive language. Although the self of the poems refers to itself as ‘i’, there is only one instance of this ‘i’ predicating anything of itself by means of a verb conjugated in the first person singular: ‘je vis’ – ‘i live’ or ‘i saw’, at the end of the second poem, and it is a rhetorical question couched in reported speech. It might also just as easily mean ‘i screw’ (read as a noun not a verb). Collobert instead uses present participles (‘je partant’, ‘je raclant’, ‘je gravant’), past participles without their auxiliaries (‘je parti’, ‘je dit’) and even nouns (‘je parole’, ‘je broyeur, ‘je temps’), none of which resemble standard French grammar. By refusing the subjugation exacted by standard grammar (e.g. ‘je suis’ – ‘i am’) and by extension the constrained, law-bound reality that it produces and grants access to, Collobert defiantly insists on the possibility of a free existence even as she announces her death. Indeed she names both at once: ‘je parti l’exploration du gouffre’ (‘i gone exploration of the abyss’). She is announcing that she, Collobert, is gone, has died, and is off to explore the abyss of non-being, but she is also announcing that the ‘i’ as such is gone, allowing her to really ‘wake up’ and to freely explore the abyss that is existence unconstrained by standard grammar. The poems also constitute this exploration, the speaker’s body becomes a landscape, its own transient world, yet this world remains linguistic: language, body and world are painfully and imperfectly fused. This world is in ruins, and the ruins are also words and wounds (‘stammerings hardly by the gashes/…/working one’s veins for words’). The self, in order to remain a body and thus have access to any reality whatsoever, remains caught; physical constraint (‘cuffs’, ‘irons’) and grammatical constraints (‘the unity of measure’) combine with one another (‘word wall’, ‘strangulation’, ‘feet in subsoil syntax’) and merge with the self. Collobert’s language ruptures along with the body, she breaks the contract normally given to the speaking ‘i’, she puts down words ‘out of order’, snubs gender agreement and litters her texts with strikingly unorthodox prepositions, creating a chaotic textual environment that, having dispensed with the paltry meaning-ration granted by the acceptance of standard grammar, is at once sub- and super-meaningful.

Given the unique make-up of Collobert’s language and complete absence of punctuation, a translation of these texts can only be provisional. In any particular passage, layers of possible readings are heaped upon one another, depending on where the reader takes a particular syntactic grouping to begin and end. The texts sometimes seem to be composed of heaped-up blocks of stony words, but at the same time signification is rushing, swarming, pullulating. Her language refuses to stop throbbing, to die. Even the means of suicide described proliferate (another instance of her language exceeding our reality, where one can commit only one kind of suicide). It is effectively impossible, for this translator at least, to reproduce the full richness of this palimpsest of variations. The version offered here then, is only one of many possible versions, one attempt. I would like to note just one particular case where this effect is easily obscured in translation. In English a noun can very easily become an adjective without modification; in French this is much more rarely the case. In those instances where a number of nouns follow one another (e.g. ‘parole mur’ – ‘word wall’, ‘sous-sol syntax’ – ‘subsoil syntax’, ‘plat désert futur’– ‘flat future desert’), the reader should comprehend independent nouns alongside one another, as well as a noun preceded by an attributive.

Finally, I would like to briefly make note of a particularly distressing and almost comic bind regarding language, experience and suicide that I think the poems manifest. The speaker has already elected to suicide, and is seemingly committing the act during the writing of the text. He or she, or as Collobert would likely prefer to say, it, has concluded that experience is unbearable because language inhibits rather than facilitates self-consciousness, coinciding with oneself, the sharing of one’s inner experience with other people, and recognition. Suicide, the paradoxically discursive termination of all discourse (and of bodily experience), is the only adequate way to escape this anguished situation. But this conclusion leads the real author of the text into a bind that can only ever be resolved by different kinds of failure.

For if you predict, justify and enact your suicide in language, then for your utterance to be really real, you must actually carry it out. But in doing so it becomes the mere fulfilment of what was already written. It is precisely when you commit suicide, which was supposed to be the decisive means of escape from an existence excessively constrained by an alienating language, that you fall victim to a mechanistic linguistic determinism. First it was written, then it merely happened. The act itself is relegated to something auxiliary, a mere outcome, an action already accounted for in advance by and in language. Far then from proving that language can be escaped by a radical act of self-negation, language’s tyranny is only resolutely confirmed: its jurisdiction encompasses even its own negation. But if it is indeed impossible to escape language’s law and its alienation by any act at all, if the act of suicide actually demonstrates this, then suicide itself can no longer be a reasonable course of action. Committing it proves that it is unjustified and of no help at all. But by demonstrating that escape from linguistic constraint really is impossible, existence again becomes so bad as to make you want to go and top yourself.

At the same time, however, if you enact your suicide, your escape from language, in language, then to not commit it in real life means that whatever claims you made in language weren’t really real. You were only saying things, only trying to show how it is as if existence were so bad that you want to suicide. If language isn’t really real, then its constraints are no longer binding. You have failed to demonstrate how language makes existence unbearable, indeed all the claims made in your text would be emptied of their real significance and reduced to mere assertions. You’ve been caught saying something that your non-action subsequently proved to be untrue. So you get to stay alive but you lose the capacity to speak truly. This mightn’t be all that troubling were it not for the fact that you’d been trying to say something essential about experience and language themselves. Language has once again obstructed rather than facilitated communication, which leads you back to your anguished starting point: language lets you utter words, but at the cost of being able to really mean anything and to so share what is really happening to you, which is just what might make experience bearable. This impossibility is bad enough to make you want to suicide in language and in real life. But not only is experience still utterly unbearable, you can’t even prove that it is so, you were only saying that it was as if it were unbearable, so why do you feel so bad after all? If you suicide you find only a worthless relief in abandoning this bind, no longer even caring if suicide itself turns out to be no escape, no ‘exit’; if you don’t suicide you consent to remain inside this bind and to find no relief, to keep on speaking even though your words fail to name the true nature of your experience. You fail to make life bearable by communicating with others, and you fail even to demonstrate that life actually is unbearable.

Pages: 1 2 3
This entry was posted in ESSAYS, TRANSLATIONS and tagged Danielle Collobert, Marty Hiatt. Bookmark the permalink.
Marty Hiatt is from Melbourne. He most recent chapbooks are the manifold, hard-line, and festivalize this.