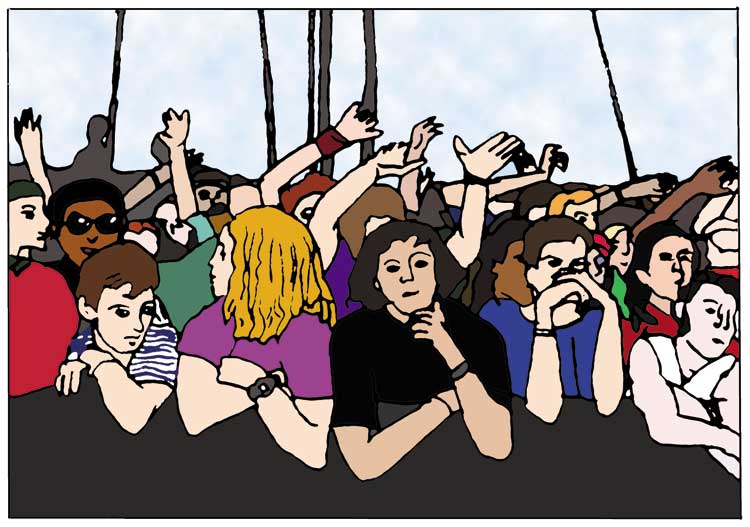 A few weeks ago a friend pointed out to me that if you type www.cordite.com.au into a web browser and, as the saying goes, 'run it through the Internet', you'll find not this site (we're steadfastly .org) but a guns and ammunition site. Given the events this month in New York City (and given that the word 'cordite' does have an explosive meaning), you would think that I would have thought to check it out. But no. As strange as it sounds, I've never even bothered. So I was more than a little startled the other night when I typed the .com address into my browser, to find instead a home page under construction – 'New site here soon.'

Strange game, this Internet business. The theme for this issue is music. And yet despite the Internet's mind-boggling possibilities, the ones we constantly trumpet on about, the only sound you'll hear issuing from this page, this screen will be the sound of your computer humming, perhaps in the dark.

Then again, you might already be listening to music.

What are you listening to? The radio? Is the television on tonight? Again? Which one of your neighbours is making noises?

Poetry makes music out of what you're reading about in the papers. Some of the poems in this issue are actually set in (or otherwise allude to) New York City. Publishing these poems has not been driven by a desire to somehow capture the impact of recent events in the United States – rather, they represent a (perhaps eerie) collection of post-American impressions.

Let me warn you – there are some long poems in this issue, too. You may have to scroll down to reach what you're looking for in them. In their new format they descend into the abyss of the infinite page, like Scott McCloud's Zot!

Some poems we couldn't translate using html, you know – the V=I=S=U=A=L poems. They're pictures now. Then there's the e-poems. The ones sent to us via e-mail.

Naturally, we've got some music poems as well. Nick Whittock, speaking in the voice of cricketer Michael Slater, imagines himself a rock star:

Martin Crawley describes a place I'm sure we've all been to, the land of drunken musical revelations:

My flesh was keen,
I was binge-thinking about the times they guffawed at my jokes,
I was falling in love with new music,
I was contemplating an affair with the Virgin Mary.

While Ouyang Yu remembers a musical experience from his childhood:

In addition to our usual selection of poetry, we've got some interviews and articles focussing on the ways in which poets appreciate music. Kevin Hart and Alison Croggon (who spill the beans on their experiences for us) have both worked in the medium of music. Anna Hedigan deconstructs the 'poetry' of singer-songwriter Stephen Malkmus, claiming that 'Malkmus works best without narrative, when he concentrates on rhythm, spiky unexpected wordplay and powerfully segued images.' Finally, Andy Jackson gives us the low-down on the new poetry/music fusion sensations of Melbourne.

Come back to the site in the coming weeks – we'll be adding reports and photos from the National Young Writers Festival in Newcastle, plus other unconfirmed additions!

For our next issue, we'll be turning to the question of Asian poetics. I look forward to your contributions.

Until then – plug in, tune up.

This entry was posted in ESSAYS and tagged David Prater. Bookmark the permalink.
David Prater was Cordite's Managing Editor from 2001 to 2012. His first poetry collection, We Will Disappear, was published by papertiger media in 2007, and Vagabond Press published his chapbook Morgenland in the same year. His poetry has appeared in a wide range of Australian and international journals, and he has performed his work at festivals in Australia, Japan, Bulgaria, Canada, the United States, the Netherlands and Macedonia. He has also undertaken two writers’ residencies in Seoul, Republic of Korea, and has worked extensively as a teacher, editor and researcher. He currently lives in Stockholm, Sweden.