The Swan River is central to Perth’s mythology. It’s the proverbial lifeblood of our township. If we were feudal, we’d bring our horses to drink from it, our children to learn the magnitude of life it contains. Of course, now our river blossoms algae, and we move from feudal to almost futile. As settlers, we have disrupted the mythology Indigenous Australians birthed it with. We have even accidentally pumped it full of effluence, the foreshore attracting its own sense of chaos and grand uncontrollable beauty. And yet, it still captures our imagination, although we are watching it die.

As somebody who was born elsewhere, I can identify with Kim Young-Moo’s Perth poetry. His awe for the Swan River corresponds with an awe that has bloomed through my own poetic tropes. It’s an awe I have seen flourish in the poetry of other West Australian poets, those who I admire or aspire toward. Perhaps it’s the innate love of rivers, a shared ancestral respect for these points where we build our cities. Or perhaps it’s because there is something truly magical about the Swan River.

After all, according to the Nyungar people, the Swan River was created by The Wagyl, a winged serpent who created the troughs and slope of the river with the breadth of its body winding through the landscape. The Swan Brewery, near Perth city, is the site at which it apparently has and continues to slumber. The construction of this much lauded yet now largely forgotten building was fraught with bad publicity, both literal and supernatural. Once built, it reminded me of having all those hollow contrived lines that make for the setting of a good horror movie. After all, the site is an attractor of the horrific, with more than one Perth poet writing about the inherent violence that ghosts and scars this site. And all the while – beneath it – a mythic beasts harrows in its sleep, haunted by nightmarish visitants who take the form of little white men with huge greedy eyes that swallow and swallow and swallow.

Our river is populated with various waterfowl. Pelicans calculate with exactitude the currents to swoop, freeway lampposts their lookouts. Ducks cling to the shores, jostling on the lapping waves. Herons skulk and stalk the shallows, meditating on extraction. And then there are the swans. Correction: and then there are the black swans.

If swans are elegance personified, their black counterparts are maverick and slightly malicious. Swans in general are known for a savage strength, their wings and beaks legendary, the bird capable of breaking a man’s arm. But white swans would, perhaps, refrain from such violence. After all, it is not befitting royalty, and white swans are supposedly descended from royal blood. The black swan, however, is descended from the common people. This bird is the salt of the earth. It embodies, more than it can imagine, the down-to-earth larrikinism of the Australian people. No surprise, then, that it is one of the emblems of this state of Western Australian. Black swans emblematically wing our flags.

Black swans were considered mythic until they were discovered in 1697. It’s this span from myth and legend that led Nassim Nicholas Taleb (2007) to develop the Black Swan Theory. This theory suggests that, as it occurs, an event is surprising and has an impact on the observer… at least. In retrospect, or in contemplation, the event becomes rationalised. It could, in effect, have occurred at any time to anyone: probability makes the impossible and spectacular a potentially commonplace occurrence. It makes life… mundane.

Poetry bears similarity to the Black Swan Theory. The event experienced by the poet is profound. It is life-changing. It is unique. It is rare and exceeds expectations. It is a fission of potentiality. It must be captured. And in capturing, the rare becomes rationalised. It is edited for effect. It is adapted, changed, remade. It becomes a probability of poetics, at its most accomplished, capable of recreating the majesty of the initial event in full effect, but only existing as its approximation. It is not the event itself. It is merely a report of the event. This essence may be captured and depicted through the technical skills employed but the poem itself is not the event that inspired it. It is a black swan – rare at first sighting, but ultimately commonplace in the statistical realm of human experience.

Yet, for a moment, that black swan is a majestic enigma, breathtaking to behold. Kim Young-Moo’s poems are like such creatures. It’s no wonder, then, that his more transcendental – or shamanic – experiences use the black swan as the central image around which the scope of the spirit pivots and shifts.

I want to build a nest and spend some time here.
Becoming a water bird

I want to visit that forest of masts
across the river, moored with sails furled.

today,
I want to go flying

on some snow-covered mountain slope.

In his poem ‘Perth: riverside with swans’, Young-Moo invokes grokking, a shamanic practice of entering the body of an animal, a practice traditionally used to gain knowledge or wisdom. Here, Young-Moo groks with the black swan. “Becoming a water bird” is a tenuous process, Young-Moo’s deliberate use of a grammatical dangler to open the sentence pitching the act into a vague placement of action.

As he travels, the “forest of masts” he longs to visit invokes the sotdae of Korea, totemic poles typically crowned with the carved effigies of water-birds. They ward off evil spirits from villages, and sometimes mark celebratory rights of passage. Here, they herald good spirits toward them, captivate the soul to take flight, as it were, becoming hypnotised by the process of transcending. And Young-Moo succumbs, his soul enthralled in a winged flight over waves, the world capitulating upside down so “lake waters / shine somewhere in the sky”.

The experience is so mesmerising it carries Young-Moo back, far back, to the haunting simplicity of the Korean wilderness. The process becomes stripped of magic, anchored in a profound vista where the sotdae shucks its totemic quality to become merely a tree, the cresting of waves magnified into a froth of snow, the shoreline sloping to become mountainous. It is no longer the poet who has transformed: the world has shifted around him, become a vision of another realm, a place he knew and yearned for. And that place is the barren majesty of home, a landscape that is alien to all those who visit it, but not those who seek sanctuary within it, who “build a nest and spend some time”. Such familiarity is only achievable if you succumb, entirely, to the place.

It is a poem which reflects many aspects of traditional Korean poetry. In fact, its closing twin images are iconic in conjuring up an Asiatic vista of harmony and oneness with nature. They are almost iconic in that respect, iconic like the black swan is to Western Australia. Here though, landscapes are tinged with an otherworldliness – ultimately, we are all aliens here, unless we identify as Indigenous Australians. As such, a folklore and legend unknown to us and our modern conquests sleeps within the landscape. 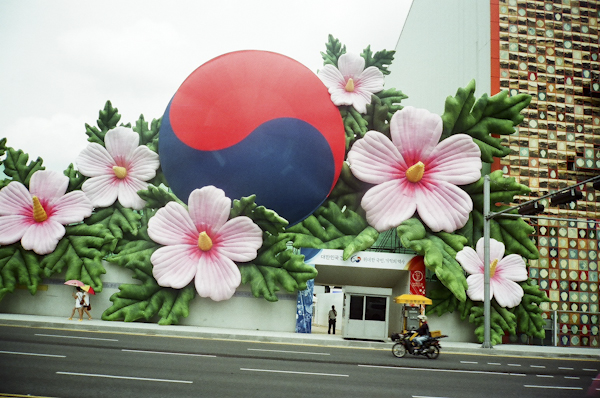 Young-Moo feels this. His poetry hints at it. Yet it is through the perceived presence of this sacredness that Young-Moo is able to invoke the same myth and wonder of Korea – essentially, the two landscapes reveal their secrets to those who are born from its bloodline. The revelation is unique to the culture, naturally. Myself, I still stand outside both of them, feeling what lies beneath, hinting at it with my own poetry, but not able to transcend it fully: it is not my place to appropriate indigenous religious or shamanic beliefs for my own gain.

This land is to be honoured. It will reveal what it chooses to reveal as it sees fit. I must merely wait. For Young-Moo, the revelation was the harmony that resonates from home and the stark majestic scope inherent to such resonance.

It becomes evident elsewhere in Young-Moo’s black swan poems that the affinity with the Australian landscape extends to Indigenous Australians too. On first reading, his poem ‘Formalities of thanks’ made me incredibly uneasy. Here are bold statements that, out of context, can be construed as racist. After all, we’d expect rednecks to say “Native Australians / do not know how to say thanks” – although such people wouldn’t have the decency to use such a politically correct term when addressing the traditional owners of this land. For Young-Moo, the certainty of the statement is tenacious. It continues with him instructing the reader to “not expect / any kind of expression of thanks” if you gift them food or drink. As an opening stanza, it smacked of the same dogged determinism that racism and bigotry does. And just as I balked and dared to move on, the second stanza expanded the sentiment, explaining the tribal nuance of gift-giving, how “everything is a gift from their tribal spirits”.

Native Australians
do not know how to say thanks.
If you give them biscuits or some chocolate,
or a few cans of coca-cola,
you must not expect
any kind of expression of thanks.

To Australian aborigines
everything is a gift from their tribal spirits.
Once a year they gather to thank the gods
in songs and dances, and that is all.

We are all brothers and sisters of the same tribe,
everything under the heavens is yours and mine,
so no need to say thanks to anyone.
All is freely given, freely received,
and as there’s no word for thanks
there’s no ingratitude either.
Ah, how fascinating the barbarity
of the black descendants of the Rainbow Serpent!

There’s nothing new under the sun
and there’s nothing in the world that is ever old
so how disgusting
the laws of etiquette in advanced civilizations
that consider patents, copyrights and vested rights
sacred and inviolable.

What began as an expression of foreignness, unfamiliarity and contemplated experience has become, in part, a commentary against civilised societies and cultures around the world; the scope of conviction broad enough that it lacks any hint or tone of racist or bigoted thought. It is comment. Comment must be broad. To be specific is to single out. Young-Moo deftly circumvents that, essentially criticising the capacity of his own society and culture, as well as those he has navigated through since.

After all, “the laws of etiquette” make for a disgusting display of how coveting and conquering mar any intrinsic familial bonds of society, forsaking a collective community for the feudal bond of the singular family. Bloodlines work in harmony, do not amass by forsaking connectedness. It’s a societal epidemic that stems from such nations’ disconnected relationship with the world they inhabit, the world that gives to them, unconditionally, the world they need not thank. Formalities have overshadowed the simple act of being grateful. We are consumed with modern living. As a result, we have forgotten how to be unique.

Thanks only comes through begging, bargaining and desperation. We are desperate to sate our consumption, having forgotten what our ancestors taught us, forsaking them for skyscrapers and mobile phones and mega-corporations who confront each other, waging their boardroom war in our pockets and bank accounts and in our unending need to be spiritually whole, even though our spirit long ago slumped over itself, sick from civilisation.

And again, the harmony of Young-Moo’s black swans, the harmony inherent to Korean poetry, resonates. It beckons. There is peace, somewhere, amid all this maddening sound. There is gratitude too. There is an insatiable desire to see, and to reflect. Within Kim Young-Moo’s poetry there is a dual capacity; for great poetry, no matter what culture it comes from, contains harmony and gratitude.

View all posts by Scott-Patrick Mitchell on Cordite →