Vorticist Portraiture in Mina Loy’s Anglo-Mongrels and the Rose 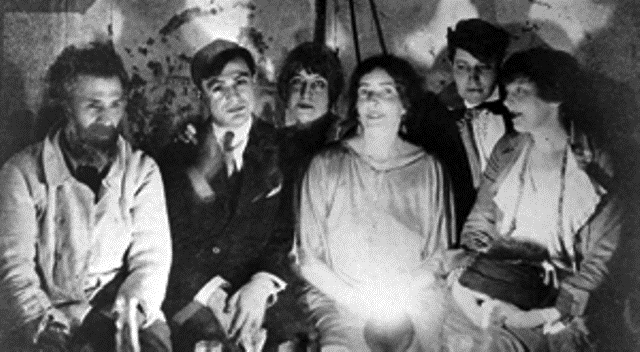 Mina Loy with friends, image courtesy of My Poetic Side

Mina Loy’s book-length poem Anglo-Mongrels and the Rose (1923-25) essentially presents an alternative, revised understanding of the modernist figure of the artist through a ‘polyglot’ language and avant-garde form (Perloff, English as a Second Language, online.). I argue in this essay that each of the characters within the poem is constructed through a Vorticist model, which also encompasses elements of Futurist and Cubist theory, as well as structurally incorporating Steinian poetics. Loy eventually distanced herself and her work from a purely Futurist model because of the movement’s misogynistic overtones as well as their exclusive focus on speed and dynamism. Although she was not formally associated with the Vorticist poets and painters, their combination of analytic stasis and poetic dynamism are elements which assist in illuminating Loy’s approach. Vorticism’s formal focus on transformation complements a deeper study of Loy’s poetics and constitutes the vitality with which Loy created her verbal composition of an artist.

Anglo-Mongrels and the Rose (1923-25) chronicles the childhood and early adolescence of Ova, a character who represents Loy in this semi-autobiographical work (ibid., online.). The poem is broken into three main sections through which verbal portraits of Exodus (Ova’s father), Ada ‘The English Rose’ (Ova’s mother) and Ova herself are presented. By using Futurist and Cubist techniques, which can be directly related to the contemporaneous aesthetic principles of Gertrude Stein’s ‘portraits’, Loy presents these personalities as fragmented elements of motivations and traits revolving around an epicenter of conscious and unconscious intentional energy. Whilst Exodus in the poem is defined by his constant unease and need to migrate, Ada is defined by a continuous negation of the self; Ova’s primary interest becomes a need for artistic expression which she inherits in part from her father, and utilises to give expression to the corporeal and bodily experiences her mother denies actively for herself. Ultimately, Loy uses Ova to refigure the modernist trope of the artist, particularly in its feminine construction. In doing so, she combines Wyndham Lewis’s and Ezra Pound’s idolisation of artistic genius with Gertrude Stein’s call to displace subjectivity from its position of centrality within the text, in order to suggest that the ‘artist’ is found in moments of relational action, especially in the relationship between a creative individual and their dynamic environment. Her poetry must also necessarily be understood through its abiding concern with the question of gender: like her contemporaries Djuna Barnes and Gertrude Stein, Loy endeavoured to represent a reformed female consciousness through its role and function within the modernist avant-garde. Ultimately, an irresolvable conflict emerges from the core of Loy’s poetic subjects which maintains their defining qualities (gender, environment, ideology) within a dynamic tension. The artist is rendered as an accommodating space or entity. Loy’s method of representing the various elements of her characters’ personalities in a constant state of flux, while located in terms of a central concern which struggles to express itself through language, can be considered Vorticist.

Mina Loy lived in Italy whilst the energetic popularity of Futurism began to spread across Europe. Her romantic affiliations with the founder of Futurism – F T Marinetti – as well as with Giovanni Papini, a member of the group, has been widely noted. However, it is likely that Loy was in fact involved in the creation of the movement and it is certainly the case that Futurist aesthetic principles heavily influenced her early poetics1. Marinetti’s ‘Futurist Manifesto’ called for the ‘destruction of syntax’ (Marinetti, Futurism, 143) and for a liberation of words from traditional linguistic modes of representation. He stated that the poet must ‘cast immense nets of analogy across the world’ so that a new and unusual relationship is formed between otherwise unrelated images and ideas (ibid., 149). For the Futurists, in the dawning ‘machine age’, subject and object, foreground and back ground, could be expressed through a ‘sense of speed or dynamism’ (Adams, Blasting the Future, 10) that essentially blurred the division between interior and exterior realities, with a renewed focus on movement and sensation. Whilst Loy does not submit fully and as ferociously to a worship of modern technology, she does embrace the changing ‘Modern’ world by texturing her writing with selected words from various scientific and technological discourses. She often incorporates repeated references to biology, physics, geometry as well as other physical sciences (Prescott, Moths and Mothers, 198). Thus the very fabric of Loy’s poetry is created through her ‘polyglot’ vocabulary and reflects a more nuanced and unstable vision of the Modern, technological world (Perloff, English as a Second Language, np.). Additionally, a confusion of subjectivity and the phenomenal world is a major concern in Anglo-Mongrels and the Rose, as Loy comments on the formational roles of nationality, culture and society in the shaping of the subject’s language, consciousness and sense of agency. Marjorie Perloff notes that the poem itself is an encompassing of linguistic hybridity. In its satirical nature, ‘the language itself is as “mongrelized” as are the principles of her narrative’ (ibid., np.). Ezra Pound, with Wyndham Lewis, would later incorporate this Futurist ethos to disrupt society on all levels through the Vorticist movement.

Futurism is often contrasted with the contemporaneous artistic movement of Cubism which began in 1908. A major concern with spatiality in the visual arts is common to both schools, however, Futurism’s ‘plasticity’ and spatiality itself, for the Cubist, is imbued with perspective2. Rather than art transcending in a vertical manner to a higher realm through symbolic means, the Cubists prized a spatial transcendence which provided an analysis of multiple perspectives. Particularly influential for Loy was Gertrude Stein’s realisation of Cubist principles through verbal portraiture. Susan Holbrook concisely compares Stein’s works to Cubist theory. Whilst Stein re-organised syntax, treating adjectives and verbs as nouns, Cubist paintings held no singular viewpoint, ‘democratising components of a composition.’ Stein’s obscured and disavowed verbs represent the Cubist collapse of time in painting. Their subjects are ‘viewed from different vantages presented in two dimensions’ (Holbrook, Companion to Modernist Poetry, 351). Loy’s verbal portraits, whilst quite different from Stein’s, still echo a self-reflexive focus on the ‘materiality of language’, complementing the simultaneous use of language for ‘representation, reference and enlivened realism’ (ibid., 350). Perloff draws a similarity between the achievements of both artists in their poetry and verbal portraiture: ‘Anglo-Mongrels and the Rose represents a rupture with lyrical tradition that parallels Gertrude Stein’s break with conventional narrative’ (Perloff, English as a Second Language, online.).

Mina Loy associated with Stein in Italy and Paris and wrote about Stein’s poetics. In Stein’s texts she finds ‘the very pulse of duration’: as she writes, Stein ‘invites you into the concentric vortex of consciousness involved in the most trifling transactions of incident’ (Loy, Manifesto, 242). What interests Loy most about Stein’s writing is her portraiture, particularly her ability to evoke a concrete sense of personality through a foregrounding of the materiality of the language. She compares Stein’s texts on the one hand to sculpture, and on the other characterises them as encompassing an essential dynamism – ‘the flux of being as the ultimate presentation of the individual, she endows with the rhythmic concretion of her art, until it becomes as a polished stone, a bit of the rock of life – yet not of polished surface but of polished nucleus’ (my emphasis) (ibid., 238). Loy’s terminology here strongly echoes the French philosopher Henri Bergson (1955), an influential figure for Futurism, Vorticism and Steinian poetics. Using Bergsonian ideas, Loy identifies in Stein’s compositions, an ‘inner life’ of movement and ‘flux’ complemented by a heightened attention to form. The ‘nucleus’ of the text or subject is hardened or ‘polished’ and their various, outwardly resonating movements are in a state of flux: this is in many respects similar to Vorticist theory.

The displacement of the subjective from its central role in the text is a fundamental innovation that Stein brought to modernist literary aesthetics. Whereas Marinetti, Pound and Lewis designated a ‘superhuman’ will to poetic subjects in order to penetrate matter with form, Stein’s poetics insisted on a variety of perspectives and a complex relationship between matter and form itself. Peter Nicholls describes Stein’s ‘different modernist poetics’ as expressing ‘continuities between self and world’ with an attention to ‘texture as opposed to meaning’ (Nicholls, Modernisms, 198).

Ultimately, Stein’s poetics presented Loy with alternative ways to think about language in a modern way: her ideas at once complement and run counter to those of the Pound tradition also evident in Loy’s poetry. In Anglo-Mongrels and the Rose, Loy primarily employs the present tense, especially in pivotal moments in her characters’ consciousness when depicting revelations – she thus achieves a version of Stein’s ‘continuous present’. Like Stein, Loy’s portraits demonstrate a desire to ‘achieve an immediacy of presentation’ that is ‘normally identified with painting or drawing’ (Blau, The Artist in Word and Image, 132). Her characters’ subjective realities do not occupy a linear relation to their surroundings. Rather, Exodus, Ada and Ova experience their language, and by extension, consciousness, as being overtly shaped by their environment. Changes in thought and patterns of behavior emerge suddenly and spontaneously, as a combination of both subjective will and environmental circumstances. Thus, Anglo-Mongrels and the Rose problematises the concept of artistic agency in Steinian terms.

Founded by Wyndham Lewis with the help of Ezra Pound and others, Vorticism developed as an English response to preceding European avant-garde movements. Pound himself describes Vorticism as an amalgamation of ‘imagism, neo-cubism and expressionism’ and defines it as characteristically an ‘intensive’ art (Pound, Gaudier-Brzeska, 90). Crucially for Loy, its conception of the human subject is also one of continuous movement and transformation: instead of a person being passively and receptively that ‘toward which perception moves’, the Vorticist subject directs forces and conceives, as opposed to merely ‘reflecting and observing’ (ibid., 103).

Within a project of characterising influential Modern poetry as combinations of ‘Logopoeia’, ‘Melopoeia’ and ‘Phanopoeia’, Pound specifically termed Loy’s poetic style: ‘Logopoeia – the dance of the intellect amongst words and ideas’ (Pound, Literary Essays, 25). Logopoeia, Pound asserts, ‘ employs words not only for their direct meaning, but it takes count in a special way of habits of usage, of the context we expect to find with the words, its usual concomitants, of its known acceptances and of ironical play.’ (ibid., 25). Loy’s frequent use of poetic irony – which she inherited, like T S Eliot, from the French poet Jules Laforgue3 – also injects clarity and wit into her verse. Nicholls explains that the ‘dance of the intellect’ is ‘the dance of irony which offers the necessary escape from sentimentality and romantic expressionism, providing a strategic means by which to affirm the self as strong and authoritative, ‘modern’ rather than ‘decadent’’’ (Nicholls, Cambridge Companion, 55).

Loy’s logopoeic poetry expresses itself with machinic efficiency, but this technique is used primarily to develop her characters as well as for social critique. Often in Loy’s verse, especially in the case of Exodus and Ova, the characters encounter and are fascinated by new words and phrases. Loy initially presents their intellectual processes through unexpected, physical and proficient vocabulary before the words are worked into the rhythm and texture of the verse itself. This method draws attention not only to the materiality of the text, but also to the nature of consciousness itself. The reader is required to engage actively with the poetry through numerous perspectives in order to find significance in the changing patterns of the verse. Through her logopoeic style, Loy keeps ‘different elements’ distinct within a scene, although the scene itself is constantly changing.

Pages: 1 2 3 4 5 6 7 8 9 10 11
This entry was posted in SCHOLARLY and tagged Alex Goody, Elisabeth Frost, Ezra Pound, Filippo Tommaso Marinetti, gertrude stein, Helen Jaskoski, Henri Bergson, Julia Kristeva, Marjorie Perloff, Mina Loy, Urvi Majumdar, Wyndham Lewis. Bookmark the permalink.
Urvi Majumdar completed her Honours in Literature from Monash University in 2014. She has been teaching English and Literature for the last two years at Victoria University Secondary College. She has developed a love for poetry through her studies and has had work published in Verge and Rabbit magazines.