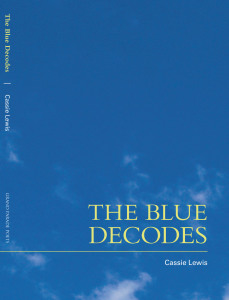 After spending my teenage years with only Dorothy Porter for Australian poetry company, I discovered HEAT magazine in the orderly periodical shelves of the University of Queensland’s Social Sciences and Humanities Library. I was supposed to be learning how to write essays for EN152, instead I was learning how Australians wrote poetry. Until then I had thought it was only Brits, Yanks and James Gleeson who wrote poetry, but it turned out people from this country, only a decade or so older than myself, were writing poems about things I recognised in language that was familiar. Chief among the poets who dazzled me on those distracted days was Cassie Lewis, a precociously talented young Melbournian riding high at the turn of the millennium. As well as publishing regularly in key magazines, her work was collected in the era’s two important anthologies of Australian poetry: Michael Brennan and Peter Minter’s Calyx and Ron Pretty’s New Music. Still only in her mid-twenties, Lewis was the fourth youngest poet in Pretty’s book and perhaps (not all birthdates are listed) the youngest in Brennan’s and Minter’s. She was one of only a dozen poets who appeared in both.

Since then her peers – poets like Kate Lilley, Michael Farrell, Michael Brennan and Kate Fagan – have gone on to form part of the core of an established generation of Australian poetry while Lewis has only published intermittently. Her first chapbook, Song for the Quartet, was published in 1997. It was followed in 2002 by High Country in one of Little Esther’s pocket editions, then Bridges in 2006; and then nothing. In her biography there are possible clues to this relative silence. In 2000, Lewis left Melbourne for the United States. Landing in San Francisco, she founded Poetry Espresso, an early online poetry collective and tiny press in 2001, before settling in upstate New York in 2004, where she now works as a nurse at the University of Rochester Medical Centre. It seemed Lewis had joined the ranks of other anthologised poets from the turn of the millennium, including Jemal Sharah and Ted Nielsen (New Music) and Adrian Wiggins and Sue Bower (Calyx) who no longer publish. In fact, Lewis was omitted from Contemporary Australian Poetry, the new Puncher & Wattmann anthology edited by Martin Langford, Judith Beveridge, Judy Johnson and David Musgrave, while both Nielsen and Wiggins made the cut. Lewis was also one of the troika of young poets to whom John Forbes’ ‘Lessons for Young Poets’ is dedicated. The other two, Kieran Carroll (now a playwright) and Ramona Barry (an important figure in arts and crafts), have long since given up poetry and so, it seemed, had Lewis. So last year, when Grand Parade Poets editor Alan Wearne told me he was publishing Lewis’s The Blue Decodes, it was as unexpected as the postman turning up with hand written, postage stamped letter.

Based on the poems in The Blue Decodes, Lewis is an artist who values silence as much as noise. The book’s ninety pages, which include a number of poems published in her chapbooks, represent well over two decades’ worth of work which provides an interesting purchase on the question of why write poetry in the first place, particularly if it seems like an adjunct to an already full life? We can surmise that Lewis’s nursing career, her role as a mother and wife, the pileup of life’s prosaic diktats and sundry other factors combine to annihilate the time needed to write. Despite this, though, Lewis has not abandoned, or even forgotten poetry. That she has continued to write and seek publication suggests a need to write. This compulsion, combined with poems that are often short or fragmentary, lends the collection a sense of urgency. These poems simply have to be written.

There are multiple descriptions of her writing process in The Blue Decodes but one formulation appears twice. (Is there a better way of economising writing time?) Firstly, in ‘from Postcard Poems’:

Line breaks removed and tweaked slightly, the formulation’s second appearance comes a little over a dozen pages later, in ‘Bridges’, the long sequence that closes the book:

I hum softly to myself, I stay up late hungry and dreaming aloud. To type is to construct little shanties for the night. Something blue, immaculate comes at me through the screen. It’s the sky in Arizona.

In this formulation writing equates to building homes or, put slightly differently, of finding a place in the world. This idea crops up again and again in The Blue Decodes, at times amplified by the expatriate’s perennial dislocation. There is a sense, in the poems, that poetry provides, for the poet, access to a schema for living that is otherwise inaccessible. Home isn’t simply physical or geographic, it is a source of belonging and a refuge, a way of understanding the world and existing in time. The advice poem ‘The Way to Keep Going’ highlights the dislocation upon which this need to write poetry, as a way of existing in the world, is predicated. It begins:

Failure’s relativity to material circumstances could be a wry dig at the class with more dollars than sense, or Lewis could be arguing for the importance of another form of shelter, one that we can find in ‘the smallest things’, and which helps guard against the grim realisation that ‘Nothing ultimately matters’. This type of shelter is a knowledge that can inoculate, or at least provide temporary consolation, against nihilism. This is important if hope is, as it often seems in Lewis’s work, either past or illusory: ‘My life is like a map / where hope has been’, she writes (‘Vanguard’).

Pages: 1 2 3
This entry was posted in BOOK REVIEWS and tagged Cassie Lewis, liam ferney. Bookmark the permalink.
Liam Ferney's most recent collection Hot Take (Hunter Publishing) was shortlisted for the Judith Wright Calanthe Award. His previous volumes include Content (Hunter Publishing) and Boom (Grande Parade Poets). He is a public affairs manager, poet and aspiring left-back living in Brisbane with his wife and daughter.