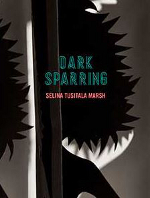 A prologue, titled ‘Matariki’, acts as an invocation. Matariki is the Maori New Year, and the name of one of Tusitala Marsh’s students, who had recently lost her mother. The narrator urges Matariki to:

This repeated imperative declares the purpose of the collection. While Part I is, ostensibly, more concerned with politics of place and belonging than personal grief, the invocation in ‘Matariki’ adds an elegiac mood:

‘Chant from Matitia to Orapiu’ presents Waiheke Island in present continuous verbs, rhyming sinuously down the page. The oscillating lineation provides the movement promised on the back cover. During the months of grief, the blurb explains, the fatele, a traditional Tuvaluan dance, and Muay Thai ‘began to echo each other and to take shape in words … in the sparring my body learned to swing, pivot, move with a raw instinct in defence and in attack. My mind began following my body’.

The poet’s sensitivity to physical settings leads gradually into sharp, often witty, analyses of what it means to belong. In ‘Niu Sila Skin’, the narrator’s uncle

Tusitala Marsh’s language is controlled. The man ‘in the blue mother hubbard/ languors in the doorway’ (13); he could have ‘lingered’, but ‘languors’ better captures the place’s sultry, unhurried atmosphere.

This linguistic control is used to satirical effect as the section progresses. Tusitala Marsh employs mimicry, found fragments and juxtaposed dictions to repeatedly pose questions of national identity. In ‘Afakasi Archipelago’, the question comes in a page of dense, smooth haiku:

Towards the end of Part I, two poems weaken the complexity and clarity of Tusitala Marsh’s questioning. ‘LEAD’, dedicated to “BEST Leadership Academy” and ‘New Zealand, the Lucky Country’, to “Leadership New Zealand and Jo B”, appear politer and flatter than the preceding poems. Often, Tusitala Marsh brightens the platitudes with more surprising lines (‘Lead with national excellence and innovation/ Lead through intimate conversation’ [27]), but the overall certainty of the poem’s message, paradoxically, feels dubious. This certainty is apparent in ‘New Zealand, the Lucky Country’, to the extent that the reader might view the refrain as ironic. The lack of punctuation in

The fight returns immediately in Part II. Cancer appears in various guises throughout the section. Malignant cells are personified as the god-like body’s creations in ‘Genesis’. Grief is viewed as a plane crash in ‘A photo album, an op-shop bargain and a grandbaby’ with the shocking first line ‘these items are flotation devices’ (47). The disease becomes a kidnapper sending ransom notes, and the treatment is a choose-your-own-adventure novel.

As the section proceeds, the metaphors are shed; instead of turning the illness into easier forms, Tusitala Marsh addresses it head-on in ‘13 Ways of Looking at Mourning’. Along with ‘Blackbird’ and ‘50 Ways to Read a Mother’, this poem acknowledges Wallace Stevens’s influence.

The metaphors of the fatele and the fight provide the strongest language and offer the clearest perspectives from which Tusitala Marsh examines her grief. In ‘Fatele’, she writes, ‘E tasi te ‘gana e se tāitāi o lava./ One language is never enough’ (79). Like the jab, hook, elbow and backfist described in ‘Muay Thai on Saturdays’, Dark Sparring deftly employs an artillery of languages to attack the opponent that is the narrator’s grief.

This entry was posted in BOOK REVIEWS and tagged Amy Brown, Selina Tusitala Marsh. Bookmark the permalink.
Amy Brown teaches creative writing at the University of Melbourne. Her first poetry collection, The Propaganda Poster Girl, was shortlisted for Best First Book at the 2009 New Zealand Book Awards. The Odour of Sanctity, a contemporary epic poem that formed the creative half of her doctoral thesis, will be released in July 2013