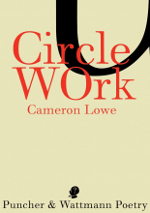 The poems in Cameron Lowe’s Circle Work swing across each page at a strangely measured, athletic tilt. The scope is local and vast, the gaze muscular, and Lowe sweeps the vistas (from Corio to the universe) for details apprehended as preternatural. His rapture typified in the lines, ‘the body’s cruel admission// that close is never close enough’ (56), these poems skirt edges of realness without entering the domain of things. Lowe’s is a poetics of evanescence, not arrival, and Circle Work frames the contours of human habitats as noise-filled within << blancs >> of silence. This book, a ‘stage of surfaces’ (31), watches carefully the play of order: birds and cats and dogs, flower-filled gardens and houses, dark bays and intersected hills and, everywhere, sound and light tinged by season or time.

At heart an outsider, Lowe is a transcendentalist who botanises everyday scenes grasped as events within chthonic dimensions (what else?). Self-conscious, and like the ‘silhouettes of trees/ so dark against the sky’ (67), perhaps Lowe too can be categorized a silhouette, lurching across all-too-defamiliarised territories. He satirises himself as a self-italicised ‘I-as-sensitive-register’ (12), signaling a style promised in the book’s title: is ‘circle work’ a matter of doing donuts in a carpark? Or beyond the vernacular is a different labour intended, in which the poet is cognizant of elemental cycles? One suspects both; deploying a highly-functioning depth perception, Lowe writes of –

and half-listens to the noise of their chatter while scrutinising beyond, where leaves touch in darkness. This nocturne then swerves, toward the sublime –

So many of these poems act like small incisions in mundane realms, letting in either the light or a darkness defined variously by the sheens, hard edges, folds, reflections. Lowe’s language is anything but blurred, and his poems are belief-filled, believable, and self-believing moments of clarity, each a ‘diligent tracing of form and beyond’ (15), as if that is possible, from where the poet might fathom the shapes of us in all the in/glorious weirdness.

There are a range of poems about poetry in Circle Work – ‘A kind of music’, ‘At the Geelong Art Gallery, the Great Australian Poet discovers a potato cake in his pocket’, ‘Notes toward a possible haiku, or deliberations on the usage of metaphor’, ‘Borders’, ‘Some thoughts by Michael Basinski on the American poetry scene, reconsidered as the Australian poetry scene’, ‘A lazy Sunday afternoon in which …’ – and Lowe seems anxious to somehow critique (more than satire, less than straight piss take) what he perceives to be the value (or valuelessness) of poetry. Which begs the question, necessarily: what is a poet hoping to do when critiquing poetry within their poem? One possible answer is ‘to provoke: what has been (or currently is), I am not’. Circle Work, then, as demography (blokes-in-cars, etc) and demonology (human strangeness within sublime sites), and a circling on other poets: this, less an anxiety of influence as an anxiety toward peers, is fitting for any outsider (and an impulse perhaps best held in check).

This is also a collection of domesticity and self-situation – in which can be found ‘cicadas already screeching in the evening trees’ (23), and onions ‘frying/ in the pan’ (45) while the wind is ‘driving petroleum fumes/ over the green water of Corio Bay’ (54); when a cat regards ‘the humming fridge/ still enough milk for tomorrow’ (19) it is here, sheltered and intensely connected, that Lowe locates a mode of ‘“no need/ to really think” ease’ (68). But herein lies the irony: outside his sanctum, the poet adopts a meditative ‘vacant gaze’ (9) (indeed, the opening poem, ‘In memory of flowers’, scans like a thinned-down, wiry text from Wallace Stevens), and the majority of the poems in Circle Work are anything but ease-filled. Each thinks laboriously, virtuously and often hilariously, toward the lucidity of often-uneasy contexts. Unlike his dog, who ‘doesn’t know/ what to do’ (28), Lowe remains sure-footed in these succinct and unpredictably beautiful poems; his aphoristic grasp of uncanniness works like a precision technology, and this poet-mediator stays fixed on scanning theatres of the real, swerving and verving robust toward

This entry was posted in BOOK REVIEWS and tagged Cameron Lowe, Dan Disney. Bookmark the permalink.
Dan Disney is an Associate Professor with Sogang University's English Literature Program, in Seoul. He is currently completing a collection of sijo/stlings.