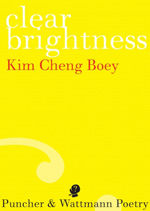 With Clear Brightness Kim Cheng Boey offers a slim volume that, in addition to addressing notions of place, exile and travel, carries with it a deep melancholy of being written in ‘the lone wastes of middle age’. His explorations of worldliness are welcome, and Boey offers portraits of interconnectedness even as he displays and explores alienation. Moving from markets to Chinatowns, from Singapore’s National Theatre to California’s Santa Barbara, this collection often shows the objects that connect the past to the present, keepsakes available to keepers and gleaners alike.

Boey’s meditations on memory’s presence are inescapable. The poet is watchful as memories resurface, and the collection as a whole is ‘sleeved in the salt of memory’. We see the poet ‘Cruising for charms/ that will be memory’s currency’; contemplating ‘the Persian rug memory’s/ nameless longing fleshed in dye and skein’; following ‘memory’s story/ in the body’s passage through the bazaars’; wandering through ‘These Fez days in trance, in memory’s warp/ and weft, gathering tokens against the future’s loss’; listening for the ‘pentatonic measures between memory/ and home’. Throughout these poems he is ever:

The weight of all this memory! Often bound up in souvenirs and objects, it marks this volume not as the exotic travelogue of a poet displaced – no matter where he finds himself, it seems – but instead as an example of the kind of accounting any of us might undertake upon reaching a certain age. Just as objects may help us understand who we are, we may also use them to:

Such objects are on display in the centres of commerce that Boey describes in his sequence ‘To Markets’. Laid out for the browser are objects that the poet does not buy, that may bleed into the lives of others. These commercial centres offer an endless array of objects, many generic yet rendered haunting by their sheer quantity and repetition. Boey’s poems show us that the age of the Silk Road is still with us. A route that was never singular has grown, in our twenty-first century, more and more confused. The deftly-rhymed sonnets of ‘To Markets’ start in Sydney’s Glebe and then unfurl a complex network of ‘souvenirs and silks’, ‘bootleg cassettes’ in ‘Change Alley’, and ‘polyester shirts, plastic toys and dusty books strewn/ on the pitted, betel-stained ground’ in ‘Calcutta’, as Boey moves across the world to the ‘potent herbs’ of Tangiers and the ‘carved birdcages’ and ‘art-deco tubs and sinks’ on offer in Madrid. He shows us a ‘crazy patchwork/ of tribes, trades and tongues’. In a world obsessed with globalization, these still seem strange to us.

‘The Markets’, like the later sequence ‘Chinatowns’, shows both the mobility of the modern world, and also our efforts to retain a sense of separate history: each poem is marked by the global, the local and the personal. The objects on sale at these markets, from Sydney to Isfahan to Marrakesh to Madrid, bear a decided tendency to blur. Yet the power of the senses draws the reader into Boey’s own particular history, in which, as in Proust’s work, aromas unlock stories. In these moments the senses break the present moment open and flood the poet and the reader with the past. This sensory focus is perhaps most evident in the poems about food, which also reveal the communal importance of shared memories of meals taken. In the poem ‘Soup’ Boey writes,

View all posts by Kate Middleton on Cordite →