Obviously in some ways everyone’s response to a ‘poem event’ is subjective, despite common elements – to what extent is a close reading of an electronic work an objective account, as opposed to a subjective record of the performance of the work for you?

It would be the latter, obviously. I think digital literature makes that a part of its aesthetic and poetics, to make sure that there is not one single reading. Obviously some works, particularly Flash poems, which function basically as videos, don’t inherently, either physically or materially, have forking paths or varieties in their performance but I will read it on a different computer to others, in a different setting, I will bring to it my own experience of visual works or video or film.

I’ve been fascinated by the ways in which people try to explain that which is unknown – and digital literature is often unknown – and the way people react when they see something for the first time. Perhaps if I’m presenting something, which happened at the English department where I was, they would try to connect it to other forms that they knew, which I think would also very much colour their reading. People would see a Flash poem and say ‘Oh, but that looks like a music video’, and then everything that they said about it was coloured or tainted through that lens.

Others would say ‘Well, no, that is exactly like the visual poems that I saw, the printed visual poems of the concrete poets in the 1950s’, and then that would of course have a great impact on the way that they saw it historically, in a sort of lineage from concrete poetry onward, but also politically, in what view of language this particular poem had. And that would be almost without any kind of gloss or description from me at all – people would sort of try to figure out what this new animal was.

And so therefore that just proved to me that there could be no objective reading. There can be precision – that’s why I mentioned description. I’ve also seen scholars who have presented readings of works where they have for instance mistaken the software involved – thought that something was Flash when it wasn’t and things like that, so that’s just a part of being materially aware …

… of the way it’s being constructed as well. 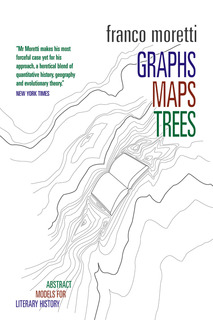 What’s your opinion of ‘distant reading’?

Moretti speaks of distant reading … I would not venture as yet to say much about it – I’ve read a little bit and I would actually like to read some more. I do think it seems to be a part of a trend in the humanities to figure out what digital technology means to humanities scholarship; in part also to move away from, we already mentioned close reading but also perhaps this model of reading one or a set of works based on a particular theoretical framework or a specific thematic question and then delving into the works and reading them and teasing out all the kinds of meaning that there can be given that framework – essentially your hermeneutical project.

And what I understand from concepts like ‘distant reading’ or ideas about visualisation and cultural analytics, which is something that Lev Manovich is working on – it seems to view literature as data, and as data to discover or visualise cultural patterns and trends at a different level. And in a certain sense, why not – because in one sense that is what cultural studies has been doing for quite a while, to view literature as one cultural artefact among many that echoes or mirrors the human condition in various ways.

What I find problematic in some of the accounts – not the ones we mentioned, Marretti and Manovich but others that I’ve seen recently in the New York Times – some of these visualisation projects, I wonder how much they obscure, as much as they visualise and make present very interesting patterns that otherwise could be very difficult to obtain and see, I wonder how much they obscure as well. And that demands of the scholar to think about this as not one tool, but to think about it as one of many.

If I could return now to teaching: what kinds of skills do you think a teacher of electronic literature needs? In what respects are these skills or skillsets different from those of teachers of other kinds of literature?

It’s a difficult question. I’ve taught literature in various ways, in various theoretical frameworks, I’ve taught courses that were basically survey courses – for example, British literature, starting with Beowulf and moving to Jeanette Winterson – that was a very historical way of looking at literature, and picking literary works, canonical works, and perhaps not so canonical works particularly when you come into the contemporary age.

And if you’re a teacher basically spending your time teaching literature and seeing that as the pinnacle of human cultural output, the notion of thinking about writing more widely might be very challenging. And I think particularly now with the Internet and social media, there’s a lot of resistance to thinking about Twitter feeds and Facebook updates and so on as any kind of meaningful cultural work, whereas others try to think of it as part of writing digital media.

Okay but do you think that implies a different set of skills for those who can see that as being important?

To a certain extent. Something that I discovered when I was working on my dissertation was that I needed a lot of input from other fields – so it was an interdisciplinary adventure, as it were. I studied a lot of media studies, visual culture, computation and computer history, and some philosophy as well. But having said that, a lot of literary studies is also interdisciplinary, it sort of depends on what field you’re working in.

I had training partly in post-colonial literature and that was very wide and very eclectic both in terms of theoretical approaches, actually welding sociological approaches and methodologies with humanities-based approaches. And also thinking across the board in terms of primary materials, so I think from that perspective you don’t have to know all of these things but perhaps you need to be open enough to understand when something is offering a challenge to you as a teacher and you need to venture over into computation, perhaps, and read a little bit there, to see a little bit more about what can help you explain or present this to students in a useful way.

And finally, if you had to come up with any advice for teachers embarking on a subject featuring electronic literature, what would you tell them?

Be bold. Dare to include literature that’s probably going to defy your notion of what literature is, and in my experience most certainly many of the students’. Have these uncomfortable discussions and also be aware that in terms of computation, your students may know more than you and that’s absolutely fine. So just be daring and be bold, because it can also be a lot of fun!