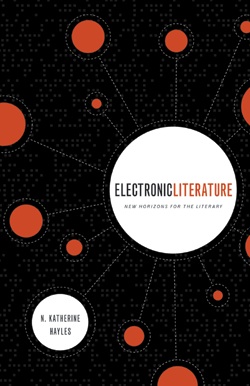 N. Katherine Hayles in her book Electronic Literature speaks of ‘flash points’, meaning moments within teaching where a certain kind of connection is successfully made. Could you give us one example of a flashpoint you have experienced in your own teaching of electronic literature?

It depends on how we understand ‘flashpoint’. Because when I read that I thought, ‘ah, that’s interesting’ – there can be a number of different ways in which you can understand that moment of discovery. I thought of Roland Barthes’ notion of a ‘punctum’ in a photograph, or just any kind of ‘a-ha’ moment where you see, either for yourself or through your students, that things sort of fall into place. I had a couple of moments like that, and usually they came about when, in these courses on digital poetry that I mentioned earlier, I asked students to create their own digital poem. They could use whatever style of writing or technological or multimedial (or monomedial) environment they wanted but it needed to have some kind of digital component.

Many of them chose to do either HTML, hypertext or Flash works. And the way in which they creatively worked through some of the ideas that we talked about, but most often also the models of interaction and reading and writing that they’d seen in other poems – that provided I think a moment for them of discovery, of working through notions of design, thinking carefully about reading as a designed process, but then also for me to see – it was almost a point of satisfaction for me to see – that they’d had a moment where things had become clear for them.

Then, as always, things can get muddy again quite quickly, particularly theoretically. A lot of people struggled with Kate Hayles’s rather cognitive scientific basis of the way in which she sees how our minds interact and operate within technological frameworks as part of what she refers to as‘cognisors’ – that is a model that some students (and scholars too) found difficult. So I think maybe I thought of the flashpoint as a little bit more metaphoric than biological.

In that sense, what is your view of that notion that it is a biological or a neurological process or phenomenon? Do you agree with that?

Well, obviously we live in our bodies – we experience life in an embodied fashion – but I’m not sure as of yet in the things I’ve read (and I haven’t read extensively) how to make the link between my experiential moment with any kind of artefact – physical or digital – in the world, where I can be aware of let’s say sensory inputs. Because that’s something I can be made aware of, how things feel when I touch them, or how I think about my gestures when I’m engaging with let’s say a touch screen. And I can be part of an aware process, but when it comes to these neurophysiological patterns of information I find sometimes that the metaphor of the brain and the Internet as the same kind of informational structure seems too neat. I just don’t know enough about how this cause and effect functions neurologically.

Well, I guess that’s still the great unknown, even for neuroscientists. When it comes right down to it, it’s very difficult to pinpoint moments when a connection is made – you’d think a teacher would be able to say ‘And that was the moment when the student learnt something’. But perhaps it’s not really that surprising that you can’t see into the mind of a student and work out whether they’ve got something or not!

I guess sometimes these things happen in retrospect, and by that I really mean looking back. I’ve had those moments when you actually realise retrospectively when things function – so it doesn’t become part of your experience in the moment but it becomes part of your reflection afterwards. And you have signs, even overt signs, with students saying ‘Now I get it’ and we’ve all heard that, right?

I think it’s a more complex feedback loop that goes on, in terms of how we think about teaching, how the students conceive of their own learning. They need to be engaged as well and sometimes those moments are maybe not flashpoints but are actually moments of failure, because the ideas are difficult and the material is new, and you experience something in that frustration that you learn from later but at that particular moment it feels like everything is …

Exactly. So I have actually had much more use I think intellectually when I’ve read Michael Joyce’s work on notions of re-reading (ref?), and thinking through in retrospect reading processes and learning processes in various ways. 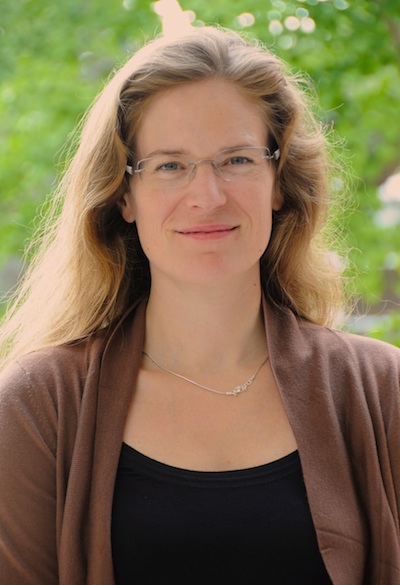 You have written some critiques of e-lit works, for example in the Cybertext Yearbook – what kinds of challenges do electronic works pose in terms of close or critical reading?

Close reading of electronic literature as a concept came up a few years ago for me. I saw it first maybe in the German context, and in some essay collections coming out of Belgium and the Netherlands as well, and American scholars hearing ‘close reading’ would associate it with New Criticism, not a very fruitful concept anymore.

So I thought of it along the lines of a media-specific analysis that Kate Hayles talks about, or a materially-aware reading, and my understanding of that came out of reading Jerome McGann, thinking about the visuality of print literature, typography, the whole ‘textual condition’ as he calls it; working through some works by Johanna Drucker, who’s very much a printer and a writer and aware of graphical processes of meaning-making on the page; and then Kate Hayles who’s obviously invested in working through digital media.

For me that was what constituted close reading – paying attention to various aspects of a digital work that would not normally be part of your toolbox of methods or even theoretical concepts going through literary studies, where certain things like narratology presented problems, problems that young scholars are now working though very interestingly with hypertext for instance, or thinking about word and image tension, when it’s not an illustrated page [such as what you’d find in] a Victorian novel.

I thought about works of electronic literature needing a lot of description – that’s one way of thinking about close reading, and I think for digital works it was very important for a while. For a while there was also a lot of general theoretical thinking dealing with what it means to read digitally, things like Jay David Bolter’s Writing Space, or Lev Manovich’s Language of New Media (thinking more broadly about new media).

And then for digital literature, there were a lot of taxonomies, trying to genre-specify particular works, but then also going a little deeper and saying ‘Okay, so how does this work actually mean something?’ – picking apart the different bits and pieces. And usually they’re multimodal, they’re interactional, they’re algorithmic, and all of those different elements play together in making that work, in making that, I called it a ‘poem event’ in my dissertation, to describe that as a process of material signification.