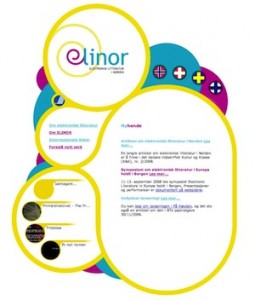 You mentioned the example of the hypertext writer whose works were not accessible anymore. In that context, can you tell me about your involvement with the elektronisk litterature i Norden (Elinor) project?

I was part of that briefly and at a later stage, so I wouldn’t know exactly how it came about. I do know that it comes out of Norway. Jill Walker and some others were already studying – they would call it cybertext because of Espen Aarseth’s work there for a long time. They had digital arts and culture conferences there in the late 1990s and so on.

They were working on electronic textuality and wanted to see what was available at all in the Nordic countries. We knew of works in Finland, a lot of concrete poetry, again, visual poetry; they knew of some hypertext and other writers working in Norway, and there was a strong, and still is a strong contingent of visual poets in Denmark.

So they contacted me and told me about this mapping – it’s sort of an anthology – of Nordic electronic literature, and they asked me if I could provide some Swedish examples. And so I did, and found very few at the time, and still there’s very few. Partly perhaps because of the way that project followed the definition that the Electronic Literature Organization (ELO) would have for digital literature, which is that it has to have an important literary aspect to it, or quality. And that has always been a point of contention.

I think that in Sweden there are writers who work within the avant-garde, and scholars, and some of them use digital media more and more, because digital media’s becoming more prevalent. Then you have artists who use digital media, and can have artworks that use words but that a lot of literary scholars would refrain or stop from –

It’s visual art that uses words, rather than literary works to read. So there’s a strong difference between that ’to look at’ or ’to read’ cusp, between what I find are formally very similar works and highly visual works.

I’ve used used Johannes Helden’s work Primär Direktivet (The Prime Directive). It’s a bi-lingual work, so that has worked well for me, because I work in an international environment and while I do have Swedish students I also have international students, so I couldn’t choose a work that was solely in Swedish, or Norwegian or Danish. In that sense it has always worked very well for me but also because I find it a beautiful work. It has an interesting, visually arresting quality. It has an interesting sonic landscape and fragments of text that come together as an echo of a story but not really a coherent narrative. So it’s very evocative and interesting. 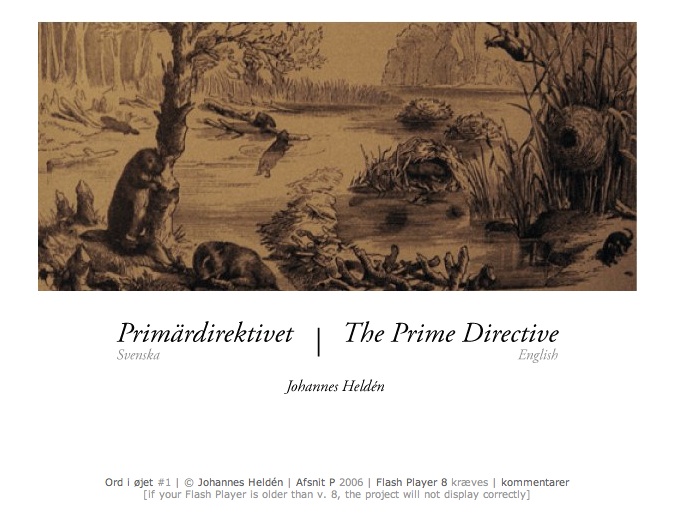 How important is national or cultural preservation when it comes to selecting those kinds of electronic literature works within a teaching environment, or a European environment?

As you know, the bulk of the work of thinking about preservation and safeguarding, dissemination in various ways – either technologically by making things transportable between different platforms, or collecting them through anthologies and so on – has basically been an American effort. The ELMCIP project which we’re a part of is an attempt to do it on a European basis but there you have the differences in language and sometimes it’s not even possible to translate from a Nordic context to a Spanish or Catalan context, culturally and linguistically.

Having said that, libraries need to, and do, work on figuring out how to preserve or record digital media artefacts in various ways, and I think digital literature is a part of that. But I would not think of it as national literatures – my background is in English in Sweden, and basically for me that meant I chose American literature and American Studies, and politics, and I also studied philosophy.

So I was never part of – in Swedish it’s called comparative literature, but it’s basically Swedish or Nordic literature, that’s where we have the studies of Swedish literature. That was never my institutional context. I don’t think of national literatures in that way, because I’ve always been a Swede studying some other nation’s literature, and you feel that you’re always studying at a distance, which can provide you with difficulties, but also with very interesting outside perspectives.

Well, from that perspective, then, how about e-lit works more generally – can you name some examples that you think are useful in an educational context?

I taught a course that used to be called ‘Digital Multimedia Poetry’ but quickly became ‘Digital Literature’ and that was primarily because I chose to teach it in terms of genres or aesthetic groupings – that’s one way to deal with digital literature, there are taxonomies that people have done in research that one can use, such as ‘code works’ or ‘Flash poetry’. You can also think about visual poetry and so on, and then couple digital works with historical forebears, so that you ground them and also introduce the historical context.

I have also tried to talk about works in terms of short and long writing, and the ways in which we read different works. So hypertext would be a group of works that I would choose and talk about, but I would also juxtapose reading a hypertext work by let’s say Shelley Jackson or Michael Joyce, with reading a multimodal Flash poem which incorporates reading, viewing, listening and interacting – thinking of multimodal literacies in that way.

I’ve tried to structure my courses thematically, which often means you teach works across an immense range, aesthetically, in terms of literary affinities, style and sophistication (one can even, almost, speak about completion). Some works feel very avant-garde and experimental whereas others are very sophisticated and mature works, and you treat those as two different types of writing in teaching.

I think you did a very good job there of not naming any e-lit works at all!

But that’s an interesting response in any case.

There are some works that I would consider classics, but I taught that course over five years and what did really change was the examples – I really shifted them around. There are certain works you have to present in order to give a fair overview of the field. I’ve included afternoon: a story by Michael Joyce; I have included John Cayley’s works – usually riverIsland but I’ve changed that as well, in terms of an example of code work or engagement with algorithms.

I have often included Stephanie Strickland’s works, but chosen different ones – she’s a poet, and a very accomplished poet, and that means engaging really with a text despite highly visual and computationally complex environments. It also means actually reading poetry and engaging with poetry in a serious way. So there are some sort of staples, but other than that I’m surprised at how much I’ve shifted things out and had different works come in.