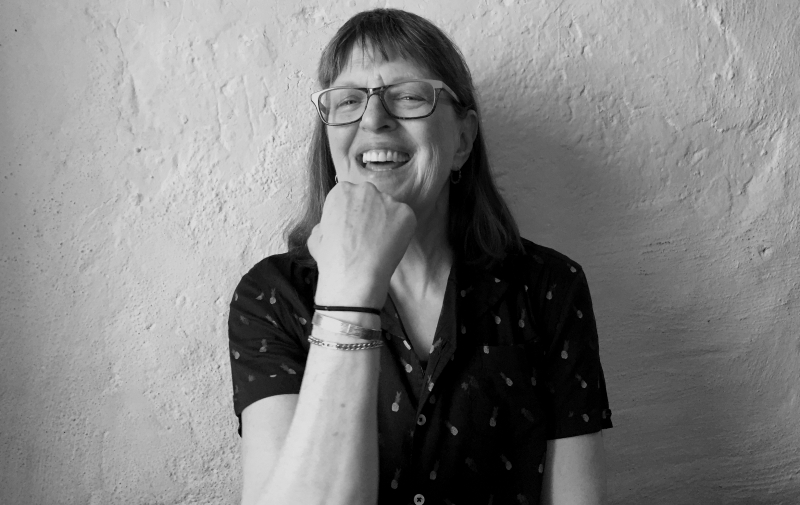 Erín Moure is an internationally recognised, award-winning, poet and translator. Drawing upon multiple languages – including English, French, Galician, Spanish, Latin, ‘MacProse’, and Portuguese – her nineteen collections of poetry (including a collaborative collection with Oana Avasilichioaei) shift the margins of possibility in thought, language and feeling. Moure is the recipient of two honorary doctorates: one from the Universidade de Vigo, Spain, 2016, citing her ‘contribution to poetry and translation and Galician culture’ and another from Brandon University, 2008, citing her ‘contribution to Canadian poetry’. She won the Governor General’s Award for Poetry (Canada) for Furious (House of Anansi, 1988) and she is also multiple finalist for the prestigious Griffin Poetry Prize for Poetry (in 2002, 2006 and 2008) for Sheep’s Vigil By A Fervent Person (her translation of Alberto Caeiro/Fernando Pessoa’s classic long poem ‘O Guardador de Rebanhos’), for her collection Little Theatres, and for Notebook of Roses and Civilization by Nicole Brossard, translated with Robert Majzels. While her own poetry is mainly published by Canadian publishers (such as Anansi and Book*hug), her translations have found homes beyond the border at publishing houses in the United States and the United Kingdom among others. Moure has translated sixteen volumes of poetry and four of creative non-fiction by writers working in French, Galician, Spanish and Portunhol. She has also translated six further collections of poetry in collaboration with other translators. She is twice a finalist for the Best Translated Book Awards (University of Rochester), in 2018 and 2020. Three of her books have been translated – into French, Galician, and German, attesting to the significance of her work for readers abroad as well as at home. My Beloved Wager: Essays From a Writing Practice, edited by Dr. Smaro Kamboureli (Avie Bennett Chair in Canadian Literature, University of Toronto) in her Poets as Critics Series (NeWest Press, 2009), gathered Moure’s poetics essays written over several decades. Moure’s translation of Québécoise poet Louise Dupré’s Tous Comme Elle (Just Like Her) received a critically acclaimed production at the Luminato Festival in Toronto in June 2010 and featured an ensemble of fifty women on stage directed by Brigitte Haentjens. The versatility with which Moure moves between and among languages and genres sets her apart.

Erín and I first met and struck up a lasting poetics conversation a decade ago (in the summer of 2010) when she was my one-on-one summer mentor during my MFA in Creative Writing (Poetry) at the University of Guleph (Canada), where she helped bring my first collection of poetry to its final draft amidst the hardcore reading she assigned me in theory, feminist, and translation poetics. Since then, she has edited my second collection of poetry and I have edited a forty-year selected retrospective of her poetry, Planetary Noise: Selected Poetry of Erín Moure (Wesleyan University Press, USA, 2017), for which I also wrote a critical introduction. I was honoured and delighted to have been asked by Kent MacCarter and Autumn Royal (with many thanks to Matthew Hall) to interview Erín on her enchanting most recent collection of poetry, The Elem:ents (House of Anasi, 2019), which we conducted by email in July and August, 2020.

Shannon Maguire: In your essay ‘Staging Vernaculars,’ from your book My Beloved Wager, you tell us: ‘In my own work in poetry, I often try to first think out a shape or physical presence, spatial, to advise me for each book … or: the book comes to me as spatial entity. Or: language itself for me is already spatial. Your most recent book, The Elem:ents (Nam:loz) (Anansi 2019), traces structural and even linguistic lines of flight between a father with dementia and his lesbian daughter who is a poet. Listening to the title in just English and French, we can hear ‘The Elle laments’. On the surface, the name of the book to me also evokes the Alexandrian mathematician Euclid’s magnum opus, ‘The Elements’, a text that defined the field of geometry for a couple of millennia until hyperbolic and elliptic geometry brought a non-Euclidian approach to the field in the nineteenth century, and which on an all-time bestseller list (at least in the West) comes in at second only to the Bible. But when I cracked your book open and saw its division into eight parts, and noticed pages like p. 90 where the page is explicitly dimensional (I know you have said elsewhere that all pages are dimensional, but you very clearly show us that in giving us Saskatoon Mountain, for example), I wondered if you wrote this book with a particular shape or ‘spatial presence’ in mind?

Erín Moure: My idea was to create a kind of day-book of writings in which poetry and thinking could both exist without hierarchisation, as the poem ‘Purpose’ sets out (p. 24). And a book that would see my Dad’s way of thinking, through dementia, as also a valid way of thinking, one way of thinking. This was important. I was coming to Edmonton as writer-in-residence at the University of Alberta, and my father (who lived in Edmonton) had wanted to write the book with me (it was a ‘demented’ idea but I accepted it and told him he could write it too), but he died ten days before I arrived to take up the residency. The acknowledgements end with an envoi that describes my reason for writing the book: In the absence of poetic razón: / To make wording for my father, / and to retrace my own meridian. Of course, my mention of ‘meridian’ evokes Paul Celan’s 1960 speech on writing poetry, The Meridian, in which he says, in part, that poetry is ‘homage to the majesty of the absurd which bespeaks the presence of human beings’. Celan says that this actually has no name, but he thinks of it as poetry. Further on in the same speech, he says, and I shorten here: ‘the poem has always hoped to speak on behalf of an altogether other’.

A person with dementia is, in themselves, I think, experiencing world and self as an altogether other at almost every moment. People in general try to ‘correct’ them, or quiet their fears with pharmaceuticals (the disconnective reasoning of dementia is extremely anxious and fearful). In dementia, I observed, though ongoing thinking is based – as is all thinking – in one’s current condition, you can’t take that condition as in any way settled or stable; you can’t even take notions of time as grounded and settled! Basic notions that most people take for granted that keep us settled as beings is unsettled in dementia. This makes thinking very different, as even time is constantly in question.

I call the book The Elements as it is about one of the elements of life, the good, bondade: goodness, which in Galician also means kindness. I talk about this on the copyright page, and the cover image speaks this as well: on the cover, in a famous photo, the allegorical image of goodness on the Dresden City Hall is intact and staring over the bombed city as if the city, in turn, were the allegory of dementia and the physical state of the demented brain. In a sense, though my father was far from the perfect human, and was early on not a father you always wanted in the house (he didn’t like being a father and was too often an angry person), he ended his life as a good man. Goodness won him. Namloz enters into the title as a counterpoint to the element of goodness, of kindness: for despite these basic elements, we are all fundamentally nameless. Altogether other. Even if we have names, we can lose those names. We are always losing our names and regaining them.

Pages: 1 2 3 4
This entry was posted in INTERVIEWS and tagged Erin Moure, Friedrich Hölderlin, Martin Heidegger, Paul Celan, Shannon Maguire. Bookmark the permalink.
Shannon Maguire is a poet, editor, and researcher of poetics and gender. Author of two full-length collections of poetry fur(l) parachute and Myrmurs: An Exploded Sestina (both published by Book*hug, Toronto, Canada), their poetry has been a finalist for the Robert Kroetsch Award for Innovative Poetry (2011), the bpNichol Chapbook Award (2012), The Manitoba Magazine Awards (Best Poem or Suite of Poems, 2012). They edited and wrote the critical introduction to Planetary Noise: Selected Poetry of Erín Moure (Wesleyan University Press, USA, 2017) and were the co-guest editor (with Lesley Belleau) for Contemporary Verse Two’s special issue Northern Ontarian Innovative and Indigenous Poetry and Poetics (39.3, Winter 2017).


More by Shannon Maguire on Cordite Poetry Review →
Erín Moure has published over forty books, including poetry, essays, memoir, and translations/co-translations from French, Spanish, Galician, Portuguese, and Ukrainian into English. Recent works are Planetary Noise: Selected Poetry of Erín Moure (Wesleyan, 2017, ed. Shannon Maguire), Sitting Shiva on Minto Avenue, by Toots (New Star, 2017), a translation of the Portuñol of Wilson Bueno’s Paraguayan Sea (Nightboat, 2017), and a reissue of Furious (Governor General’s Award for poetry 1988, Anansi 2018). 2019 saw a translation of Galician poet Lupe Gómez, Camouflage (Circumference Books); a co-traduction with Roman Ivashkiv of Yuri Izdryk, Smokes (Lost Horse Press) from Ukrainian; In Leaf, a new annotated edition of her 2016 translation of New Leaves by Rosalía de Castro; and her own The Elem:ents (Anansi). In 2020, Moure’s translation of Uxío Novoneyra, The Uplands: Book of the Courel and other poems appeared from Veliz Books, a sequence by Argentinian poet Juan Gelman, Sleepless Nights Under Capitalism, from Eulalia Books, and Chantal Neveu’s This Radiant Life, from Book*hug. Moure holds two honorary doctorates from universities in Canada and Spain, was 2017 WPR Creative Fellow at the Woodberry Poetry Room at Harvard University, 2019 international translator in residence at The Queen’s College, Oxford University and, most recently, a Kelly Writers House Fellow in March, 2020, at the University of Pennsylvania. She lives in Montreal, and worked as a cook, bar steward, porter, sleeping-car conductor, and service training specialist in her first career, a specialist in communications and strategic planning in her second, and is recently retired from working almost 25 years as a freelance commercial translator.