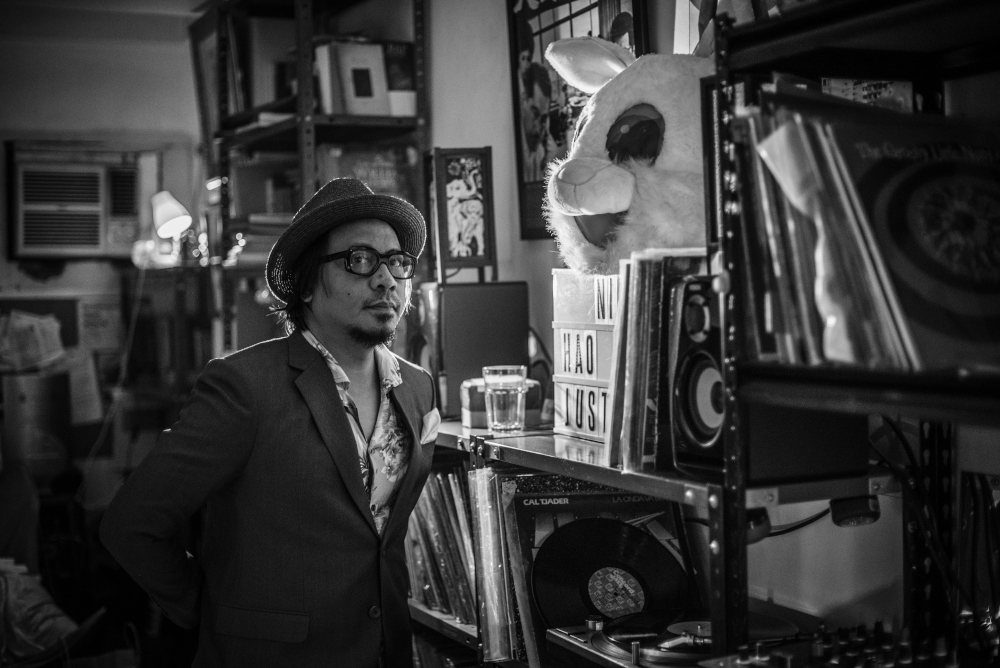 I caught up with award-winning writer and frontman of the jazz outfit Radioactive Sago Project as he prepares for the launch of his new book of poetry, Marka Demonyo. It’s the poet-journalist first collection since 2011, and the title alone (which translates to ‘Mark of the Devil’ in English) begs a closer inspection of what lies in the abyss of the book’s contents, and the impetus behind the verses.

Marka Demonyo is Lourd’s fourth collection of poems; the previous ones were Subterranean Thought Parade (1998), Shadowboxing in Headphones (2001), and Insectissimo! (2011). He’s been quite busy generating journalistic pieces and broadcast TV political commentary of late, as well as hosting his weekly music show/podcast Chillax Radio in one of the country’s local radio networks.

I, myself, have been a co-fellow of Lourd for a week-long national writing workshop ran by the University of the Philippines back in the early 2000s, his poems of the time buoyed by a growing fascination with local politics and phenomena, amid a backdrop of jazz and rock that has been a staple in his work. The latter made sense, too, as he had worked as a music writer for various Manila newspapers and magazines in the ‘90s.

We had wanted this online back-and-forth to come across as a more formal exchange, but the ongoing pandemic and too-much time quarantined at home (might have) messed with our heads a wee bit (the cases of COVID-19 in the Philippines continue to multiply, no thanks to shoddy government work).

At any rate, Lourd talks about how current politics in the Philippines informs his work in this quasi-banter. And why naming his new collection after a slogan from a local drink seems most symbolically apropos.

Joel M Toledo: It’s been a while since your last book, 2014’s Espiritu. What have you been up to?

Lourd de Veyra: What the hell are you talking about, Toledo? In 2018, I published a book called History with Lourd based on my pop history television program on (local news channel) TV5. It’s Philippine history without the academic avoirdupois. You don’t watch TV do you, you filthy snob?

JMT: Sorry, not really. My TV’s stuck on sports cable.

LdV: The dang show is regularly uploaded on YouTube. What the hell do you watch, Joel, endless Billy Collins readings and Anne Carson lectures?

JMT: Well, those and videos of llamas and cats. But I do like the several YouTube videos of more contemporary poets like Dean Young reading their poems. Anyway, tell us more about History with Lourd?

LdV: It’s like learning about Philippine history over a bunch of drunken gossips who happen to have PhDs. And it turns out that while the presentation is light, humorous, and oftentimes sarcastic, we make sure to counterbalance the blithe narrative with insights from real academic experts on certain subjects. So we’ve managed to tackle everything from debunking or confirming urban legends about certain presidents and revolutionary heroes to serious historical questions. The facts are there – names, dates, places – but we often discuss the context and the relevance of, say, seemingly esoteric 19th century events to the presently lovely shithole we’re in.

LdV: Sorry, sorry. I know Cordite Poetry Review might censor that. Let’s now try to make this sound like a Paris Review interview. And, since we’re all mostly jobless because of the pandemic, let’s just call it Writers with No Work.

Pages: 1 2 3
This entry was posted in INTERVIEWS and tagged Joel M Toledo, Lourd De Veyra. Bookmark the permalink.
Joel M Toledo holds a Masters degree in English Studies (Poetry) from the University of the Philippines Diliman, where he likewise finished two undergraduate degrees (Journalism and Creative Writing). He has authored five books of poetry – Chiaroscuro, The Long Lost Startle, Ruins and Reconstructions, Fault Setting, and The Blue Ones Are Machines. Toledo was the recipient of the 2006 NCCA Literary Prize and has won awards for his poetry in English, including two Don Carlos Palanca Memorial Awards, The Philippines Free Press Literary Award, The Meritage Press Poetry Prize in San Francisco, USA, and is the first Asian to win the Bridport Prize for Poetry in Dorset, United Kingdom. A recipient of the Rockefeller Foundation Creative Arts Residency at the Bellagio Center in Italy, Toledo was the Philippine delegate to the 2011 International Writers Program at the University of Iowa, USA. He is currently working on a new collection of poems.