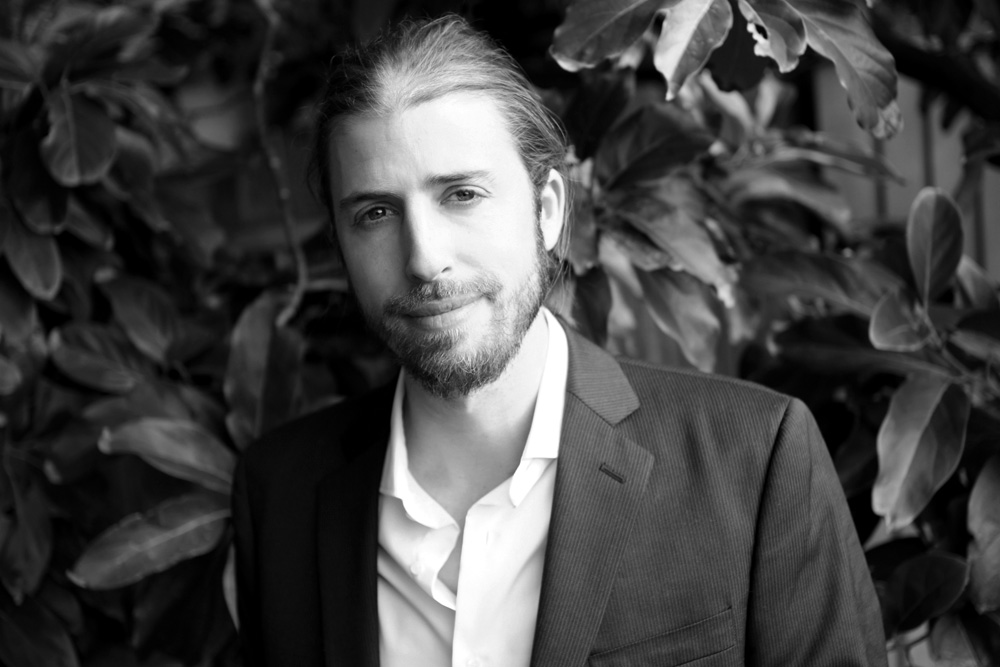 Luke Fischer has been writing poetry since a relatively early age and has combined this deep engagement with ongoing academic studies in philosophy, along with an interest in music. His first collection of poetry Paths of Flight (Black Pepper, 2013) has been widely regarded as an outstanding debut and was commended in the FAW Anne Elder Award. In 2013, with his wife Dalia Nassar, Luke initiated the highly esteemed Poetry and Music Salon in North Bondi. The private salons have also led to public iterations, including: ‘Poetry and Music Salon: Do Poets Tell the Truth?’ at the 2014 Sydney Writers’ Festival and ‘Poetry and Music Salon: Poetry vs Prose’ at the 2015 Sydney Writers’ Festival.

The following interview mostly took place between June and October 2015, mainly via email. Luke was traveling in Europe during much of this period.

Simeon Kronenberg: Given your interests in poetry, language (and translation in particular), nature, philosophy and music, what do you think makes most sense to you as a way of entering and understanding the world? What do you see as most important?

Luke Fischer: Your question rightly identifies a number of my key interests as a poet, scholar/philosopher, and curator of poetry and music events (the ‘Poetry and Music Salon’). Each of these areas is, of course, immense, so where to begin? One important thing that can be said at the outset is that one of my primary aims is to bring to light deeper connections between these areas than we often assume, without overlooking their significant differences.

Perhaps the most important distinction is the key difference between ‘nature’ and the other areas. Preliminarily, it can be said that nature is what brings itself forth, is a process auto-poiesis, such as say embryonic development (including our own) or the growth of a plant and its relations to the soil, climate, other species. In other words, ‘nature’ enjoys a kind of independent self-sustaining existence. In contrast, poetry, philosophy, music and language are brought forth by human beings and are products of culture. However, in that we as human beings are brought forth by nature, our mental capacities and our cultural worlds are also natural expressions of who we are, and as beings who essentially interpret the world, ‘nature’ cannot be separated from our ways of representing and understanding it (it is naïve to think that we can describe a nature that has no relationship to us because any attempt to describe nature is already a human interpretation of nature).

Perhaps this is the moment to turn to poetry, which is at the heart of my deepest concerns. Mountains were not considered beautiful or sublime within European culture until Romantic painters and poets revealed them in a new light in their works. We learned to see nature differently through poems and paintings. In 2005 I visited the Lakes District in England and, having been an avid reader of the British Romantic poets for many years, I felt that I was wandering through a landscape I already knew, that I was walking through the landscape of Wordsworth’s mind. The quality of the light on the mountains and lakes seemed to express the temper of his poetry.

LF: My short answer is both. If my recollection is accurate, I thought the following at the time: ‘the quality of the light conveys the temper of Wordworth’s mind (as, of course, expressed in his poetry).’ Poetry in its musicality (what Ezra Pound called melopoeia) is able to convey a distinctive tone and mood. As I have argued (drawing on a number of phenomenological philosophers) in my book on Rilke and various articles, moods and atmospheres can be more than merely subjective; they can attune us to the world and reveal the world to us in distinctive ways. Images (conveyed through description, similes and metaphors), what Pound called phanopoeia, can foster a kind of concrete thinking and imagining. To recall my experience again: it seemed as though I already had an interior map of the landscape, and, no doubt, the images in Wordsworth’s poetry had played a significant role in generating this sense. In the work of most great poets I don’t think one can ultimately divide melopoeia and phanopoeia (and logopoeia − Pound’s third term), although one can distinguish them, as everything in a poem maintains a complex balance and synthesis. As Rilke said of the colours in Cézanne’s paintings, ‘it’s as if every place were aware of all the other places’ and one can translate this to poetry in saying that ‘it’s as if every aspect of a poem were aware of every other aspect.’

Speaking of Cézanne, who can look at mountains in the same way after engaging with Cézanne’s paintings of Mont Sainte Victoire? Great art and poetry transform the way we see and relate to the world.

SK: Cezanne shifts our understanding of underlying (and universal) physical form through carefully constructed visual representation. I’m interested in the way that poetry might transform the world for us differently.

LF: Yes, there are obviously important differences between poetry and painting. Rilke was deeply influenced by the visual arts of his time (Rodin and Cézanne were especially important) but he thought of poetry and painting as nevertheless radically different. Even so, poetry can do things analogously to painting. To evoke the visual, poetry has to make use of phanopoeia. In contrast to the image of a painting, which is itself visible, poetry happens in the more abstract and universal medium of language, and is only strictly visual in its graphic appearance on the page (and, excluding concrete poetry, this is less important than its sound and semantics). This leads us perhaps to Pound’s third central component of poetry, namely logopoeia. Logopoeia refers to the way in which poetry plays with semantics, brings words and phrases into new and striking combinations, and thereby facilitates the birth of new meaning. Any ‘image’ in poetry (phanopoeia) depends on the working of logopoeia. Take the example of the splendid image conveyed by this simile in Rilke’s poem ‘Blue Hydrangea’, in which the colours of hydrangea petals are depicted as follows: ‘and as in old blue writing paper / there is yellow in them, violet and grey.’ This simile vividly evokes the distinctive appearance and colours of the flowers for the reader’s imagination (poetry does not get much more ‘painterly’ than those lines) and it does this by bringing two subjects into connection with one another: stationery and flowers. In the larger context of Rilke’s poem it is clear that the blue of the flowers is fading (until a reversal at the end of the poem); this simile not only invites us to imagine the mottled colours of the hydrangea petals through their likeness to old stationery, but also invites the reader to make further connections between the two. To take an image from my own work, ‘Band of Cockatoos’ begins with the lines: ‘The white of their plumage seems a bit too white like / the polished teeth of salesmen.’ ‘White’ is traditionally a symbol of purity and innocence (and the poem later plays with this notion further in comparing the cockatoos to children) but the coupling of this symbolism with the simile of ‘the polished teeth of salesmen’ makes the cockatoos’ apparent purity suspect from the beginning. The simile serves both to evoke the appearance imaginally (the cockatoos’ brilliant whiteness) and to trigger a number of ways of thinking about cockatoos by way of the comparison (as well as perhaps thinking about ‘salesmen’ as being in some way ‘cockatoo-like’). In other words phanopoeia and logopoeia work in tandem. It is through striking combinations of words that poetry invites us to imagine and interpret the world in fresh ways. Metaphor works in a similar way to simile, only that metaphor links the two terms even more closely; it is like a superimposition of the tenor and the vehicle (to borrow I. A. Richards’ terminology). To give an example: later in the poem the noise of the raucous cockatoos is described as a ‘punk-rock cacophony’ (which is also an elaboration of the metaphoric title ‘Band of Cockatoos’); the tenor (the cockatoos’ noisy behaviour) is seen through the lens of the vehicle (‘punk rock’).

Another way in which poetry can acquire a ‘painterly’ quality (in a less direct manner than the obvious example of ekphrastic poetry), which has become (without any self-conscious intention) increasingly important for my work, is through allusion. Painters are exceptionally significant in transforming our perception of the world, and through allusions to paintings, a poem can draw and build on these achievements.

SK: Earlier you started talking about the relationship between nature and poetry. Would you be able to say a bit more about this relationship?

LF: I see the relation between nature and poetry as a kind of entwinement or co-determination; I do not think that we arbitrarily construct nature (as some post-modern theories suggest) nor do I think that nature is wholly other than the human. Nature and culture mutually determine one another. We are not merely ecologically intertwined with nature as the anthropogenic environmental crisis is making us urgently aware, we also participate in nature in more subtle ways. Language and poetry express relations to places, climate, flora and fauna (think of all the birds in Australian poetry, in Judith Wright, Robert Adamson and so many others).

SK: Yes, but isn’t nature here (in the poets you mention) most often simply represented as a kind of background? Or even decoration? I’m not sure that nature is represented as truly ‘participatory’ as you suggest except rarely. For example are the birds in Australian poetry an indication that poets are truly expressing the ‘co-determination’ of nature and culture?

LF: I think the co-determination of the natural and the human is always taking place to some extent. We are more shaped by places and the natural environment than we are usually consciously aware; climate and topography, for instance, influence our moods and temperaments. We are inhabited by places as much as we inhabit them. This is something that I’ve explored in a number of poems in Paths of Flight (‘Tübingen’, ‘The Return of the Prodigal Son’ and other poems). Nevertheless, many poets give voice to this interrelationship in deeper and more conscious ways. (This is not to disagree with you that ‘nature’ is often simply used as a backdrop or a reservoir of symbols for the human.) As Judith Beveridge has noted, many Australian poets write about birds, and this seems noteworthy because Australia is home to a great wealth of bird species (especially parrots) – poets are attuned to this significant characteristic of our natural environment. Judith Wright was one of the Australian poets who resonated deeply for me from a relatively early age. I felt somehow that the voice of her poems was more than merely her own, that Australian flora and fauna – the ‘bush’ – whispered to me through her words, that her poetry fostered a deeper relationship to the distinctive characteristics of Australian environments. As a first generation European Australian, a genuine connection to the environment was not a given, but poetry was able to build a sense of connection.

Luke Fischer is a poet and scholar. His publications include three authored books: the poetry collection Paths of Flight (Black Pepper, 2013), the monograph The Poet as Phenomenologist: Rilke and the New Poems (Bloomsbury, 2015), and the book of bedtimes stories The Blue Forest (Lindisfarne Books, 2015). He won the 2012 Overland Judith Wright Poetry Prize, was twice shortlisted in the 2012 Newcastle Poetry Prize, and commended in the 2013 FAW Anne Elder Award. He was awarded a PhD in 2008 and is an honorary associate in the philosophy department at the University of Sydney.