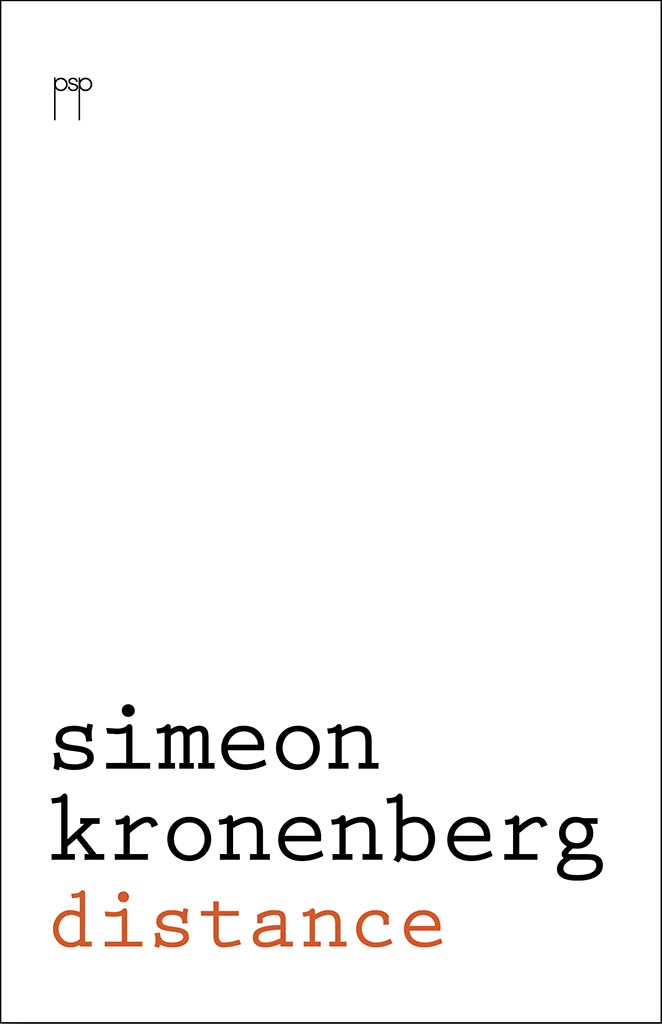 In his debut collection, Distance, Simeon Kronenberg establishes himself as a poet of inclusive intimacy, both as oddly as that sits as a phrase and in relation to the collection’s title. Intimacy is, of course, personal and the vicarious imagined. But Kronenberg’s acute sense of place and placement and his etched language and image-making draw the reader in as an almost-fellow-poet and almost-protagonist, a tendency heightened when the verse is recited aloud. And ‘distance’ is multivalent, speaking variously of time, geography, observation, contemplation and the journeys from inspiration to publication and of the heart over a lifetime of love.

The collection begins in Bali where ‘the world had caught its breath’ (‘Coming Home’), ‘birds shriek in the black palms’ (‘Darkness doesn’t descend, and then it descends so quickly’), ‘a myna’s throat rips a cry, sharp like rent silk’ (‘Legian beach’), weddings are made in sarongs in ‘the splendour of thunder and wet heat’ (‘Wedding’), fishing boat lamps are a ‘glittering of insects on a dark map’ (‘Looking south west’) and distant ships ‘attach ocean to sky at the curved horizon’ (‘Geography’). Local terms expand the poet’s vocabulary and their fricatives help orchestrate his gamelan of sensory inputs and responses. Deep affection resides here and, though not indigent, the poet is no interloper and the scenes recounted evidence a refuge and a (second) homecoming.

Kronenberg clearly reads widely in poetry, with many poems dedicated to or recalling individual poets or poems. He riffs on Anthony Lawrence twice – Lawrence was the official launcher of the collection – firstly in condensing Lawrence’s ‘Three Men’ into his own ‘Two men’; then in savouring a 2016 collection, Reading Headwaters, that renders older idioms and their ‘words suddenly new / and bright again’, in a lardy kitchen in which the poet worries about ‘a heart ready to falter anyway’ as he trips through Lawrence’s reminiscences.

Robert Lowell directs ‘Waking’ with his ‘coltish pride’, an ability to find ‘poetry and guilt as you shovelled / anxious, in the silt of family memory’ and the transcendence of ‘an illness made music’ even in a ‘conflicted time’. While Kronenberg touches on family, he is perhaps more interested, perhaps more moved, by the wider circles of friendship.

Krononberg shares David Brooks’s frustration in ‘No poem for weeks now’, the title adopted from Brooks, though ‘there’s pleasure / in the sometimes lonely drift, the tender space / between the trees’. And he imagines Keats travelling to Bali for his health in ‘If only’, rather than to Rome, where he could have enjoyed ‘the cloak-warm sky’ and, ‘breathing again, in the slowed / wet sliding between flanks’, would have called for his ‘quills and ink’ and added exoticism and piquancy to his oeuvre.

In the case of the title poem, ‘Distance’, Kronenberg melds influences in jointly celebrating Constantine Cavafy and Po Chü-I – ‘both were trapped by failure / and overlooked in distant towns / but, they railed against provincial lives’.1 Their homo-sensuality also links them to Kronenberg. The collection sees homo-sensuality move from an awakening of desire at a party – ‘a red-haired boy, / tight-jeaned, moves like Nureyev / … / I look at his crotch and want to marry (‘Bringing It All Back Home’) – to outright lust (‘I couldn’t get enough and he squirmed, / delighted, offering everything to me, shining with sweat,/ abandoned’, ‘Saeculum aureum’), a gentle undercurrent in the landscape (‘A fisherman absently rubs his crotch and his sarong fabric swells’, ‘Legian beach’), a tribal lament at the desolation of HIV/AIDS (‘When the plague came, we lost eighteen friends/ and endured eighteen funerals in the winter of it’, ‘Rome to Florence 1978’) and the context of the poet’s ongoing love in ‘Late’:

Kronenberg’s other abiding influences appear to be history and art and their transmission again evidences his literary curiosity, e.g. ‘My Caesar’, ‘Akhenaten to Smenkhkare’, ‘Unravelling’, ‘God knows I languish’ (based on correspondence between a Count Algarotti and Frederick II of Prussia). His poems are not always, or even often, interested in historical detail or artistic appreciation. They attach more to the person, recount (mainly) his attractions and loves and marvel at how he copes with travail and vicissitude.

This points perhaps to a larger theme of the constant awareness of death’s inevitability and imminence. It is a tide that touches many poems, through the direct mention of death, the memorialisation of the poem in question, the mention of impending natural disasters such as bushfires (‘Bundanon night walk, summer’), a pervading sense of loss (‘Saeculum aureum’) or ‘the tug of a persistent melancholy’ (‘Vanished’). It also suggests a need for the celebration of the ordinary things of life, as in domestically-centred poems, and people who live ‘at a slight angle to the universe’ and are ‘odd like a deer in a tree’ (‘The tilted house 1994’). The latter expand possibility for all of us.

Death is nowhere more prominent than in ‘Death of a poet’ when ‘Optimism now/ was too exhausting’ and the protagonist preferred ‘just breathing/ in benign neglect’. Eventually his friends ‘came to mourn / his readings, / his wonderful voice, / gifted him / by a million cigarettes’. Oddly, there is no mention of the dead poet’s words, despite this being his most obvious legacy. In any event, Kronenberg’s own swell into this void.

Distance is the work of a wonderful new voice, albeit of a mature poet, that is intelligent, heart-direct in diction and nuanced in comprehension, lingers awhile in the ear after reading and allows you the necessary space to ponder.

This entry was posted in BOOK REVIEWS and tagged Paul Scully, Simeon Kronenberg. Bookmark the permalink.
Paul Scully is a Sydney-based writer. His second collection, Suture Lines, was published in December, 2016 by Guillotine Press. His work has been published in print and online journals in Australia and the USA.