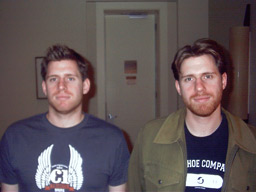 Peter and Michael Spierig are twins, so they finish each others' sentences; they're also on the verge of worldwide stardom, so their reserved manner is initially disarming. Undaunted, I decide to get right down to business and ask them about their film Undead – a zombie film that's about to be released both domestically and overseas. …

DP: Do you read poetry?

PS/MS: Umm, not regularly. I have. Certainly in the past – we've been reading Edgar Allen Poe, that's something we have read certain things from fairly recently I suppose – Poe's good to read if you're trying to research isolated fucked up characters –

DP: Can you point to any specific influence on the film?

PS/MS: Well there's certainly films obviously – horror films. Especially early Peter Jackson and Sam Raimi – Night of the Living Dead would have to be one of our favourites.

DP: What is it that draws you to those films?

PS/MS: When we saw these films we were very young, and these were the sorts of films you weren't supposed to go and see – so that's what initially drew us to them. Horror films are just a great escape and at times they're incredibly shocking – I think we're drawn more to the humour side of it though. We definitely like visual humour – we call it 'splatstick'. Undead is extremely violent but it's no more violent than a Roadrunner cartoon. You can drop an anvil on the coyote and he'll still be all right; you can do that to a zombie too.

DP: Can you nominate your favourite means of disposal of a zombie in the film?

PS/MS: My 'favourite disposal of a zombie' is the shovel in the head, I think – Yeah I'd agree with that one.

DP: What do you make your blood out of?

PS/MS: It was a combination of food colouring, corn syrup, chocolate sauce, and then sometimes when we wanted chunks we'd put weet bix in there.

DP: Tell me about the accents in the movie – they're very Australian. Was this deliberate?

PS/MS: The worst thing that we could do was to try and make an American film – Peter Jackson's film Braindead paved the way for this type of splatstick horror film and there's thick Kiwi accents in that, and that's what people love about it, so there was no hesitation in actually having it very Australian – There are some characters, specifically the cop, who is an extreme example of an Australian personality, and when we thought about the six people who would carry this movie, they would all have to have very distinct personalities and somebody like that is definitely different to the Marian character [he of the three barrelled shotgun fame – ed.] – I mean, there's never been an Aussie zombie comedy before.

DP: How big a factor was the website in the success of the film?

PS/MS: The Internet has been everything to us up to this point. It cost us $300 to set up the website, then we had 120,000 people download the trailer … The internet if you make genre stuff or stuff where there's an instant fanbase, especially monster movies, it's the best possible promotion.

DP: If you could bring one person back from the dead who would it be?

MS: Geez, that's a really tough question; I'm going to agree with him but can I get back to you on that one?

DP: Any chance of a cross-over poetry zombie film? I've got this idea for a zombie film based on Dead Poets Society …

DP: … where the students get lured one by one into this cave and then turned into zombies, after which they re-appear in the school, sprouting poetry, talking in Edgar Alan Poe voices … Maybe I shouldn't be telling you this stuff.

PS/MS: We could write like verses in guts or something …

PS/MS: You know we can't use that idea now, coz you'll sue us for it!

Undead opens in cinemas nationally on September 4. Check out the website.