Khalid
My latest fascination is a house on our street that was recently torn down. In its place are now
the bones of three houses – small, two-story units extending all the way into the former
backyard of the property. I walk past it most days, lingering each time with my hands clasped
behind my back. Occasionally, I will meet the eyes of one of the young men working on-site,
and we’ll exchange nods. Very rarely do I stick around after being acknowledged; it is as if a
spell is broken, and I am suddenly aware of myself in a way that I wasn’t before.
I’ve come to recognise the carpenters and bricklayers by their cars: the carpenters drive Hilux utes and the bricklayer’s drive Ford Rangers. I don’t know enough about the culture of tradies to speculate as to the significance of this, except to note that they are both fine cars. One day, on my way home from the IGA at the end of our street, I saw a truck back into a fire hydrant, and within moments, half the street was flooded. When I got home, I filled up a few jugs of water, before walking back outside to watch the accident unfold. A few hours later, our water was cut off and our street was swarmed with City West Water’s night crew. A couple of the residents from the retirement home next door were gathered around the scene of the emergency repair works. One of the residents, Peter, nodded at me as I took an empty spot next to him. We share a landlord; our property is owned by the same rotary club that runs the aged care home.
‘What do you think?’ I asked him.
‘It’ll take all night, water’s out. What do you expect?’ he said. I nodded and copied his pose; hands clasped behind my back. This was only the second time I’d spoken to Peter. I suspected that his unit was the one that faced the fence at the very end of our backyard, where I keep a small tub of alyssums under the peach tree. I’d been trying to grow alyssums for years, over three separate houses. The light was bad at my old house, and things tended to wither there. Seedlings would grow pale and leggy, dying before they could ever put out flowers.
The City West Water repair crew had their headlamps on, even though the sun had only just begun to set. The tipper that had caused the accident was long gone, and in its place were sewer and road maintenance vehicles. One of the trucks, a paver, barely fit on our narrow street, even with a third of its width jutting onto the footpath. Several men and women were setting up a temporary traffic diversion system to manage the traffic on the remaining usable lane. The water had stopped gushing out by this point, but there was still a lot of it around. There was a man wading through the flooded side of a street, wearing thick boots and a raincoat.
I went back inside. When my housemate got home and discovered that our water was disconnected, I showed him the jugs I had filled, as well as our fridge’s water reservoir, which was fully topped up. I told him not to worry, that we had plenty of water. Our house is also due to be torn down soon. Peter let me in on our landlord’s plan to tear down both our homes and build who-knows-what in its place. He told me it was only a rumour that was going around the retirement community, but not three days later, I came home to find a couple of surveyors walking around the front of our property, so I guess that’s it.
When I tell my friends that my house will soon be demolished, they’re sympathetic to my plight. It’s a classic one many of us have been through: rent’s too high and you’ve no choice to move somewhere else, where it will probably be higher. My housemate and I have taken this as an opportunity to indulge ourselves: we’ve added a shelf to the pantry, usually a bad move if we wanted to see our bond again, but in uncharted waters, many things which previously weren’t possible suddenly are. Sometimes, when I am in the mood, I find myself curious about the future: a year from now, ten years from now, who knows where I’ll be? 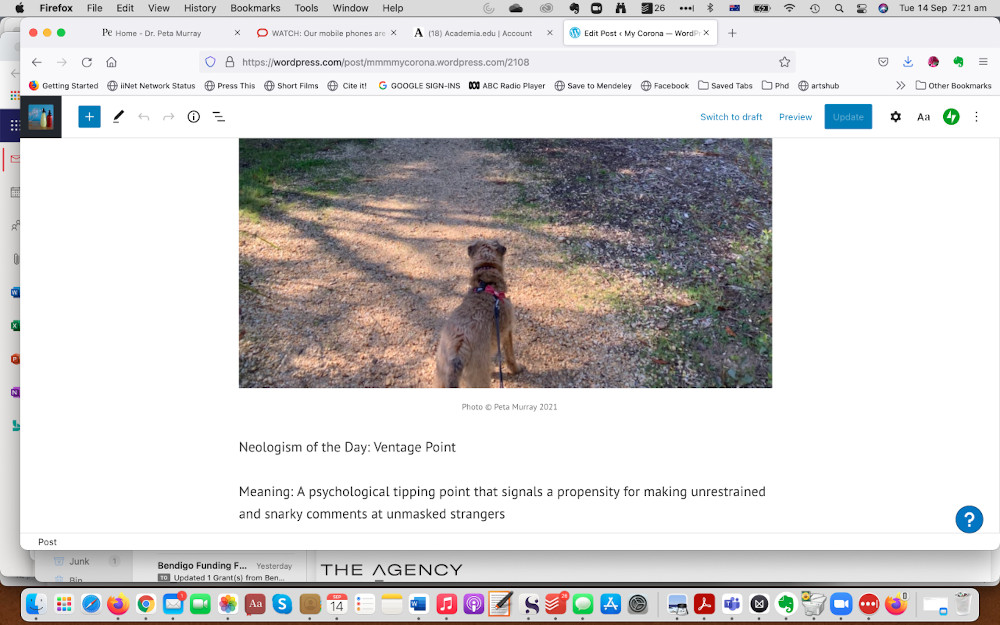 Andy
At seven a.m., just as the coffee boils, my brother calls.
The local under-12s soccer is cancelled, so I’m not
driving my nephew from Whip Gully to Epsom then
to Castlemaine today. And then your specialist leaves
a message to say he’s cancelled your appointment –
he’s still waiting on the results of a covid test. The day
yawns open. Nearby, Leanganook (which means ‘his
Teeth’ in Dja Dja Wurrung, the language the mountain
understands) sits crowned in morning fog and silences.
We’re drawn towards the crest, wanting to be enveloped
in vapour, like the desire to forget, or to know differently.
We drive, then trudge along a meandering path, a desire–
line, past fallen branches, rocks dotted with moss, beneath
the rasps of sulphur-crested cockatoos, cries of choughs.
Numbers, graphs, press conferences, curses, slough off
like old skin. Our breath blooms and disappears. Up here,
I’m still thinking of the rest of the world, still thinking
what to write in this essay (poem, conversation, broken
chorus). But the thinking is a fraction more spacious,
for now.