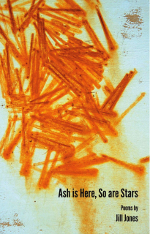 Ash is Here, So are Stars by Jill Jones
Walleah Press, 2012

‘Why wish for the moon when we have the stars’, Bette Davis famously aspirates to Paul Henreid at the end of the film Now Voyager (1942, dir. Irving Rapper). That, of course, was an iconic, melodramatic story of unrequited love given an optimistic gloss by two lovers sharing last cigarettes. Jill Jones’ ambiguously rendered celestial bodies serve up different ideas of love and loss in this new collection. Jones’ stars, moons, candles, clouds and smoky skies are part of an identifiable romantic lexicon. But these tropes, which are consistently worked across most of the poems here, as in the poet’s earlier collections Dark Bright Doors (Wakefield Press 2010) and Broken/Open (Salt 2005), are often cleverly repudiated as soon as they appear – ‘gutter is not excited by the stars’ (‘A Time to Refrain from Embracing’) – or are otherwise subject to careful deformations:

Here Jones’ stars are closer to Auden’s recast of heavenly bodies: ‘Looking up at the stars, I know quite well / That, for all they care, I can go to hell / But on earth indifference is the least / We have to dread from man and beast.’ (‘The More Loving One’). Elsewhere stars and moons become the existential spectators of traded illegal cigarettes, violent romance, failing regional cities and seedy hotels attracting characters on the lam for ‘civil shags’ next to the minibar. Ash is Here, So are Stars contains an expanded version of the sequence ‘In Fire City’, in which cities, in the best Calvino-esque sense, are hybrids of metropolises real and imagined. Elsewhere, actual rural towns and Sydney feature.

But love, often lensed via humorous pop-cultural moments, does appear to leaven, lighten and sometimes sanctify Jones’ darker urban pageants. Poems such as ‘It Only Takes a Hill’, ‘Who Cares About Our Feelings’ and ‘But We Will Not Leave’ are unapologetically romantic, declarative, hopeful paeans to love. A 1980s musical, Sehnsucht, is the kind of wittily double-headed love that is evoked in Jones’ poem ‘Fine Young Cannibals’, where the speaker is attracted to ‘faultless popstars in cocktail shoes’ who offer ‘tainted love and no regrets /’. This affectionate subject matter is reminiscent of Kate Lilley’s foregrounding of pop songs/filmic elements in ‘Baghdad Grammies’ and ‘Anniversary’ (Ladylike, UWAP 2012). I suspect both poets lived through the inimitable and transcendent synthesised music ‘poetry’ of the 1980s. But they also lived through the first uprushes of postmodernism, its literary emphasis on polyphonic voicing, wholesale cultural quotation via heightened intertextuality, and plays of imagistic disjuncture.

These techniques are everywhere apparent in Jones’ work across the decades, but the romantic excesses of ‘big hair’ and ‘big music’ are moderated by taut linguistic phrasing and challenging enjambments.

‘Do you really wanna hurt me?’ the narrator of ‘Fine Young Cannibals’ chants nostalgically, quoting gay music icon Boy George. ‘To eat from this again’, the narrator concludes straight on the back of this celebrated ‘Georgian phrase’, with an implicit exclamation mark suggested. Resistance to a more exultant, lyrical finale (e.g. ‘Oh! To eat from this again!’) is clever, offering the reader a sudden quietude, a different and more ambiguous voice. The writer pulls away from the musical chorus line to vouchsafe ordinary mortal inner thoughts and the experience of past time. ‘To eat from this again’ is thereby imbued with gentle melancholy. The sense of entering into life and love and time, only to face up to its loss and limitation as one ages, is a compelling theme across this collection.

Such positively nostalgic explorations become far more ecstatic and far more serious, if a little over-extended, in the long poem ‘My Fugitive Votive’ where:

This time we get the exclamation mark in the poem’s deeply romantic, self-reflexive coda, this repudiation of death. This is a beautiful poem, although I’m not always convinced by Jones’ jokey vernacular let loose in such serious poems. Phrases such as ‘Hang the ash, here’s the ascent!’ are nonetheless subtly interwoven, in contrast, say, to the modernist larrikin tone that can suddenly ‘interrupt’ the playful language poems of Les Murray and Chris Wallace-Crabbe.

Jones is interested in cultural history but not in detailing the vernacular speech of its ghostly subjects. She deploys changes in voice to build a distinctly personal idiolect. This has the productive intention of lightening the gravitas of her sentiments. She also aims for sophisticated polyphonic effects which create a metaphorical ‘brokenness’; the latter is less a romantic trope of the suffering artist than an allusion to the fact that the poet ‘might break light’ in order to gainfully make strange, as is implied in the self-reflexive, manifesto-like, ‘Demolition, Window’, the carefully placed last poem in the book.

Jones asserts in this poem that ‘she doesn’t know all languages but they are about love’. She exploits ‘voices out of other times / crumpled shores / All the things you might want. … … This is how it is sung. / Shadows into signs / dust absences/voices/might break light /’. The language of this poem becomes overtly sacramental here in what reads finally as a kind of poetic credo:

Pages: 1 2
This entry was posted in BOOK REVIEWS and tagged A. Frances Johnson, Jill Jones. Bookmark the permalink.

About A. Frances Johnson

A. Frances Johnson lives on the Bellarine Peninsula. She lectures in Creative Writing at the University of Melbourne and is associate editor at Whitmore Press. Her poetry has appeared in Motherlode: Australian Women’s Poetry 1986–2008 and Best Australian Poems (2009, 2010, 2011). The Pallbearer’s Garden (Whitmore Press) was published in 2008 and The Wind-up Birdman of Moorabool Street (Puncher and Wattmann) received the 2012 Michel Wesley Wright Prize.

View all posts by A. Frances Johnson on Cordite →