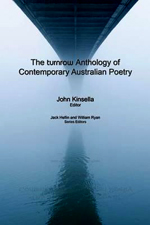 This latest anthology is certainly not of that kind. It is a fairly idiosyncratic representation of the work of 118 contemporary Australian poets, including the American Paul Kane – who spends part of his time in Australia and whose works are characteristically philosophical, almost metaphysical. Kane has the significant gift of expressing complex ideas with clarity and gracefulness: ‘The mind is a wind. It forecasts change, / a harbinger of itself’. Yet while this publication represents considerable breadth in its definition of contemporary Australian poetry, it includes fewer than half of Australia’s most interesting poets. It is thus not so much an anthology of contemporary Australian poetry in general, as a sampling of various poets’ works, including a number of writers of relatively limited achievement.

This may not concern Kinsella, who has always been willing to critique received opinions – or it may even have been part of his aim in compiling the book. Less expectedly, given that Kinsella has in the past explicitly embraced aspects of the poetic avant-garde, the works in this anthology tend to be fairly conventional, and not every one of the more self-consciously avant-garde inclusions seem the most convincing examples of their kind. (Mind you, there are exceptions. Gig Ryan’s ‘Tormented Syllogism Held at Bay’ is a superb example of a poem that plays with, and simultaneously critiques, the idea and form of the lyric, examining what lyric utterance may or may not know or remember; and the poems by Michael Farrell represent him well.)

Although this book includes much fine poetry, the selection of individual works is a little patchy. Poems have been included that do not always seem indicative of the main strengths or characteristics of one or other poet’s work. For example, while Kevin Hart’s poems are well-made works that, characteristically, marry personal tropes with philosophical and spiritual preoccupations, it’s a shame that Kinsella did not do more in representing this poet. I would speculate that this reflects his decision to invite poets to submit their own selections from their work, from which he then drew his final inclusions. It may have been preferable for Kinsella to have allowed himself to select from outside sources (in Hart’s case, numerous volumes are readily available that contain a significant number of magisterial and compelling poems).

This raises the more general question of the criteria that Kinsella employed in choosing poems, and his introduction to the volume is the obvious place to look for these. He writes that ‘there are no aesthetics at work’ in the anthology; that he does not ‘select on the basis of beauty’; and, further, that in choosing poems he does not ‘search for “satisfaction” or “art for art’s sake”’. Kinsella writes that he, ‘consider[s] the nature of the poem [and] the attributes that inform it as creative object’, but it is not entirely clear what these general statements mean given his disavowal of aesthetic judgments. (And given the fascinating theorisation of aesthetics over recent decades I’m not sure, in any case, why Kinsella dismisses aesthetic judgments so promptly.) Of course, every anthologiser is required to make their own choices and Kinsella does say that he selected poems in order to create ‘diverse and sometimes contradictory conversations’, an aim that I applaud.

Certainly there is variety. The selection from Peter Boyle’s work exemplifies the inventive and sometimes fabulist strain in contemporary Australian poetry. (There isn’t space to explore Boyle’s invention of the works of Omeros Eliseo, but ‘Summoning the Angel’ is, in any case, noteworthy in lyric terms: ‘The most beautiful poems appear in the tender spaces of marigolds / left to breathe freely between the railway tracks. / I have a taste for the burnt leaves that fall in an autumn of cinders.’) Contrast this with Jordie Albiston’s exquisite and meticulously analytical ‘Things to Do (Heart)’, and the diversity of this anthology is apparent. This last poem begins:

Kinsella’s introduction includes a rage of generalisations about the context for what he is doing and some associated socio-cultural-political issues. It begins:

Australian poetry … is informed by many cultural and social variables. It is not a monolith, but rather a pluralistic and constantly changing field of poetics and language.

Is this statement necessary? I’m tempted to suggest that almost all poets in Australia have long since abandoned outmoded attempts (strongly asserted in the 1960s and 1970s) to insist on the primacy of one or other limited poetic ‘school’ or clique; and I am also tempted to say that surely plurality has been the norm for some time now. But, on reflection, it is certainly true that some divisiveness is still a part of the Australian poetry ‘scene’ and it may well be that Kinsella believes that the virtues of plurality need further comment. I guess that he may also wish to prepare his readers for his sometimes unexpected choices of poems.

Kinsella also remarks on ‘the social, cultural and material struggles of [Indigenous] peoples [in Australia] against Western imperialism.’ While his comments on these matters are welcome at a time in our history when gross social and political injustices remain part of the fabric of Australia – and when recent national governments have conspicuously failed to address important issues of racism and prejudice – it is a shame that he does not spend more time drawing out the complexities of these issues. As it stands, his assertion that ‘a paranoid reading of Australian literature … reveals that knowledge and crisis over occupying stolen lands … gnaws at the work of most Australian poets’ appears a little far-fetched. He does not supply evidence for it and, whether read in a ‘paranoid’ manner or not, surely a good deal of Australian literature is (sadly) blithely unconcerned by the occupation of Indigenous territory by colonisers.

Perhaps Kinsella was keen for the poems he includes by Indigenous writers to speak for themselves. Some of Anita Heiss’s work, for example, comments strongly on Australian racism against Indigenous peoples and her ‘The Creator’s Prayer’ provides a striking alternative to ‘The Lord’s Prayer’:

Pages: 1 2 3
This entry was posted in BOOK REVIEWS and tagged David Brooks, Dennis Haskell, John Kinsella, Jordie Albiston, Juan Garrido-Salgado, Judith Beveridge, Kate Llewellyn, Kevin Hart, Kit Kelen, Lisa Gorton, Lucy Dougan, michael brennan, Paul Hetherington, Paul Kane. Bookmark the permalink.
Paul Hetherington has published 12 collections of poetry and six poetry chapbooks. A volume of his prose poems, Moonlight on Oleander, will be released by UWAP in June, 2018. He won the 2014 Western Australian Premier’s Book Award (poetry) and was shortlisted for the 2017 Kenneth Slessor Prize for Poetry. He was a finalist in the 2018 international Aesthetica Creative Writing Competition (UK) and the 2017 international Bridport Prize Flash Fiction competition (UK). He is Professor of Writing in the Faculty of Arts and Design at the University of Canberra, head of the International Poetry Studies Institute (IPSI) and one of the founding editors of the international online journal Axon: Creative Explorations. He founded the International Prose Poetry Group in 2014.