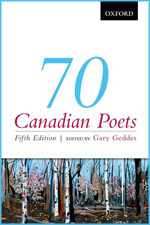 While the fourth and fifth editions have been far more open in terms of form, one of the major critiques of the earlier editions was the comparative lack of more experimental and avant-garde writers. Toronto poet Victor Coleman, present in the first two editions of the anthology, is missing from any subsequent edition, and the third volume is also the first to include work by Geddes himself, along with Montreal poet Robyn Sarah, and other more formally conservative poets. It wasn’t until the fourth edition of the series in 2001 that poets such as Fred Wah and bpNichol were included. Given both writers’ wealth of activity going back to the early 1960s, their late inclusion (specifically Nichol’s) should give a sense of some of the mistrust of the entire series. As he writes in his introduction to the new volume:

In previous editions of this anthology, I was keen to set the record straight for teachers and students who might not realise that Canadian poetry experienced a liberating renaissance during the sixties and seventies, overcoming colonial notions of inferiority, including the view that the only worthwhile writing had to be produced, or at least heavily influenced, by the mother country. As it happened, we had many mothers to consider. Thanks to A.J.M. Smith, Milton Wilson, Northrop Frye, Eli Mandel, and other critics, we came to see that “eclectic detachment,” the ability to learn from an assimilate a host of influences – English, European, American, Asian, African, Arabian, Persian, and Latin American – rather than imposing a single, dominant mode, might turn out to be our strength. I think that prediction has proven true.

It’s an incredible list, and one obviously constructed via a series of choices, omissions and considerations of space. Geddes’s introduction presents an argument of Canadian accomplishment, but then spends a great deal of time citing examples of and by a slew of non-Canadians: Dylan Thomas, Franz Kafka, D.H. Lawrence, Aldous Huxley, Ezra Pound, Plato, Joyce Cary, Wallace Stevens, Seamous Heaney, Albert Camus and Milan Kundera. Alternately, Margaret Atwood is mentioned in the opening paragraph only as part of the story of the series. Geddes cites only a single Canadian poet, Michael Ondaatje who, oddly enough, is quoted on Victor Coleman:

Pages: 1 2
This entry was posted in BOOK REVIEWS and tagged Gary Geddes, Rob McLennan. Bookmark the permalink.
Born in Ottawa, Canada’s glorious capital city, rob mclennan currently lives in Ottawa. The author of nearly thirty trade books of poetry, fiction and non-fiction, he won the John Newlove Poetry Award in 2010, the Council for the Arts in Ottawa Mid-Career Award in 2014, and was longlisted for the CBC Poetry Prize in 2012. His most recent titles include notes and dispatches: essays (Insomniac press, 2014) and The Uncertainty Principle: stories, (Chaudiere Books, 2014), as well as the forthcoming poetry collection If suppose we are a fragment (BuschekBooks, 2014). An editor and publisher, he runs above/ground press, Chaudiere Books, The Garneau Review, seventeen seconds: a journal of poetry and poetics, Touch the Donkey and the Ottawa poetry pdf annual ottawater. He spent the 2007-8 academic year in Edmonton as writer-in-residence at the University of Alberta.