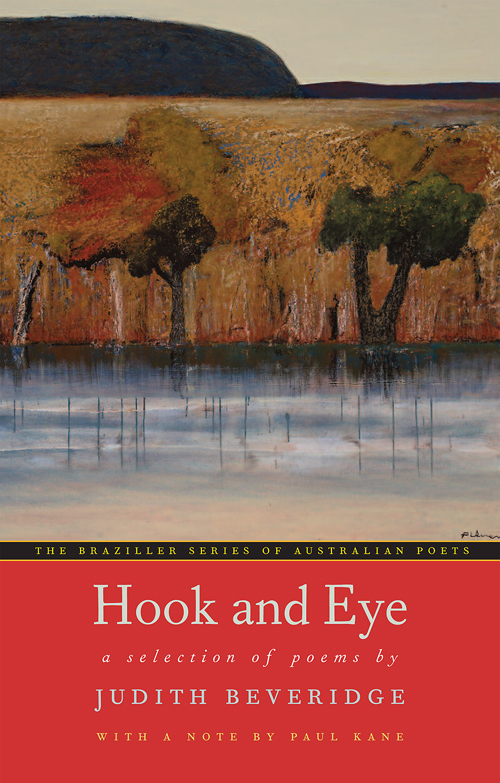 Last year I heard Judith Beveridge interviewed by Bronwyn Lea at the 2014 Queensland Poetry Festival. Aside from being left with the enduring impression that Lea should have her own TV show, I was also struck by a number of Beveridge’s revelations regarding her praxis. Beveridge confessed, for instance, that she does not like listening to music. Nevertheless, she described the process of writing poetry in a way that resonated with the classical foundations of lyric verse in music. Beveridge revealed that she begins writing by mobilising rhythm, rhyme, feeling and alliteration to bring forth the words and images of her poetry. She begins, in other words, from an embodied experience of language – as the philosopher Maurice Merleau-Ponty describes it in The Phenomenology of Language – that is essential to us all.

Musicality or lyricism defines the poems represented in Hook and Eye, a new selection of Judith Beveridge’s poems from The Braziller Series of Australian Poets. It is, after all, one of Beveridge’s trademarks. Beveridge is also known as a spiritual poet, not only as a result of her abiding interest in Buddhism, but also because of the ways in which her lyric verse, as Paul Kane suggests in his introduction to Hook and Eye, attains a ‘perfection’ of form that ‘transcends craft.’ However, the body from which the music of language arises – that sensory, sensual body – is nevertheless apparent in Beveridge’s poetry in fascinating ways.

In fact, the self-reflexive first poem of this collection, ‘Girl Swinging,’ thematises how lyric poetry is fundamentally a poetry of embodiment. In this modest but profound poem, the creaking of a swing, generated by the rhythmic motion of a child’s body, creates ‘the feeling of being pushed / into the air.’ Likewise poetry, generated by ‘the music we are,’ produces the ‘grace-notes’ that give us the feeling

This paradox – that the body generates the spiritual disembodiment or feeling of transcendence associated with the arts and religiosity – is at the heart of Beveridge’s writing, as the placement of ‘Girl Swinging’ as the first poem in the collection suggests.

‘Girl Swinging’ also highlights the child-like narcissism of the lyric poet, as she finds pleasure in her body’s sensations of speech. When it comes to Beveridge’s poetry, some lines – indeed, sometimes entire poems – exist purely for the pleasure generated by the resonant play of language. ‘The Binoculars,’ for instance, calls to mind the sonic richness of Manley Hopkins. It contains lines that clearly indulge the lyric desire of the poet and, undoubtedly, that of many readers:

‘To the Islands’ and ‘When Will the Kennelman Come’ are similarly rhythmic and alliterative, as well as making use of anaphora, rhyme, and other forms of repetition, to show how sound creates its own meaning and meaningful pleasure. While much is said of the stillness and precision of Beveridge’s imagery, ‘To the Islands’ is energetic and muscular in its cadence:

The sense of movement in ‘When Will the Kennelman Come’ is similarly strong, as is an unusual gothic sense of menace:

‘The Mosquito, Riffs and Plaints’ is likewise rhythmic and gothic. It is a poem of deliberate Plath-like lyric and linguistic overload in which we read of the

As the title of the poem suggests, the embodied musicality of language, evoked by the embodied sound of the mosquito, is of paramount importance to the poem, which also features an atypical but welcome conceptual play with words, in puns such as ‘mal-arias’ and ‘Morse-quito.’

However, the poems that are the most striking and memorable for me are those that dare to expose the body in all its complexity – that dare to contemplate the sexual body, the mortal body, the autobiographical body, the body as the site of injustice and pain – and not only the body as the site for lyric transportation. While Paul Kane argues that the fishing poems from Storm and Honey, featured in this selection, are ‘a tour de force of verisimilitude,’ it is not these poems of which I am thinking. As someone who spent her teenage years in an Australian coastal fishing town, Beveridge’s fishing poems strike me as exceptionally stylised, with little interest in the banal or, at times, ugly masculinity of such cultures. The more realistic or ‘earthy’ poems to which I am referring are more apparent in Beveridge’s earlier work, as the selection in Hook and Eye shows.

Pages: 1 2
This entry was posted in BOOK REVIEWS and tagged Bronwyn Lea, Judith Beveridge, Maria Takolander, Paul Kane. Bookmark the permalink.
Maria Takolander is the author of three books of poems, The End of the World (Giramondo, 2014), Ghostly Subjects (Salt, 2009) and Narcissism (Whitmore Press, 2005). A fourth collection, Trigger Warning, is in press with UQP. Her poems have been widely anthologised and translated, and she has performed her poems on ABC TV and radio, and at national and international festivals. Maria is also a prize-winning fiction writer and the author of a book of short stories, The Double (Text 2013). She is an Associate Professor in Writing and Literature at Deakin University in Geelong, Victoria.