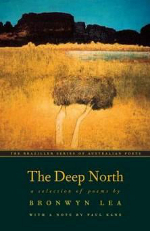 It is a tribute to the quality and readability of Bronwyn Lea’s poetry that a selection of her work forms the second volume in the new George Braziller series (edited by Paul Kane), which aims to introduce contemporary Australian poets to American readers. True to lyric poetry, Lea’s poems are musical in their composition, and they can be intimate in their subject matter. However, Lea’s work is never just about crafting agreeable verse, and it is never just about her personal experience. What makes Lea’s poetry so striking and meaningful is its acknowledgement of a wider and worldly context: historical, geographical, biological, political. In fact, Lea’s poetry might be said to enact an ironic rejection of the claustrophobic potential of autobiographical verse by continually fleeing from it to something else. This might be typical of contemporary post-Romantic poetry generally, though in Lea’s poetry—highlighting the importance of gender to the work—that flight is often symbolised by the rejection of the trappings of romantic love for a liberating movement into ‘a vantage point … a vista’ (as we read in ‘Driving into Distance’). This makes Lea’s work reminiscent of Emily Dickinson’s restless verse, with Dickinson’s presence apparent in the exquisite poem ‘Insufficient Knowledge.’

Lea’s flight to a ‘vantage point’ outside the autobiographical is evident in the prehistoric subject matter of ‘How to Become a Fossil’. The poem reminds us of the macabre fortuities necessary to fossilisation and, finally, possible resurrection in the gentle hands of an archaeologist who ‘will tend you, / as in life you had hoped to be tended’:

The poem is characteristically accomplished in its use of enjambment and its mellifluousness, but the effect is never precious or self-regarding. The images are unsentimental; Lea’s poetry so often involves a paganistic honouring of the earth and body.

‘Seven Feet and Where They’re From’ (which began as a response to John Forbes’s ‘Four Heads and How to do Them’) is another biological or anatomical poem, composed with a generous sense of perspective. Ostensibly a meditation on the humble foot, this sequence of seven poems provides us with a diverse cultural history of that appendage. The sequence begins with a mock-scientific analysis of ‘The Greek Foot’, before abruptly changing tack and offering a vision of ‘The Chinese Foot’ of a woman, its toes

There is also a poem dedicated to the story of a ‘Kuniya rock python / woman’ who walked to Uluru and slayed a ‘Liru poisonous snake / warrior’ that followed her. Her story is

This sequence further illustrates the ways in which Lea’s lyrical aesthetic, while decorative and personal, is also always more than that: sparking with political and typically gendered interests. Lea’s poems frequently reference female friendships (‘Girls’ Night of Long Island’); matriarchal lineages (as explored in the poem about her name, ‘Bronwyn Lea’); images of feminine calmness (‘Hand of the Bodhisattva’) and fierceness (‘Standing in Bette Davis’s Shoes’); visions of female eroticism (‘Original Sin’) and triumph (‘Women of a Certain Age’). ‘Orthograde’, a poem about the prehistoric development of the upright posture and gait of human beings, pointedly focuses on a woman, whose womb is the ‘unseen’ but also ‘principle thing.’

Lea’s poems are also attuned to the complex dynamics of heterosexual relationships, and they allow women the full range of emotional experience, from anger to fear, from tenderness to violence. ‘Christmas Day’ is a superb poem that evokes a woman’s desire for recognition from her partner, who sleeps in Cuzco, regardless of ‘the bells of San Blas’, ‘the smell of gunpowder that lifts / from the streets with the rain’, ‘Camilla’s crying / at dawn, Feliz Navidad!’, and the woman’s breasts pressing into his back in bed. The poet is struck by the urge to ‘uncover him’, ‘open him’, ‘shake him’, ‘hear what’s inside.’ She peels sunburnt skin from his neck and proceeds to peeling ‘back his eyes’.

Maria Takolander is the author of three books of poems, The End of the World (Giramondo, 2014), Ghostly Subjects (Salt, 2009) and Narcissism (Whitmore Press, 2005). A fourth collection, Trigger Warning, is in press with UQP. Her poems have been widely anthologised and translated, and she has performed her poems on ABC TV and radio, and at national and international festivals. Maria is also a prize-winning fiction writer and the author of a book of short stories, The Double (Text 2013). She is an Associate Professor in Writing and Literature at Deakin University in Geelong, Victoria.

View all posts by Maria Takolander on Cordite →