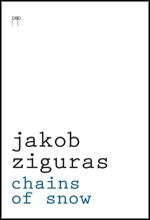 From time to time, a genuinely exciting poetry discovery arrives – I was going to say in the letterbox, but more usually now in the email inbox. So it was when Jakob Ziguras first sent me some of his poems, nearly two years ago now. He told me that he had been writing for some fifteen years but had made few attempts to publish his work. I could hardly reconcile the second fact with the first. It was immediately apparent, when I began to read what he had sent me, that I was not dealing with a mere beginner. Here was someone who had not only pretty well mastered the technical skills of formal verse but could employ them – and this does not always follow – to compose poetry. He was already writing with authority and a clearly individual voice. I urged him to begin sending out his work as widely as possible. His poetry soon began to appear in print and be shortlisted for prizes – and indeed to win the Harri Jones Memorial Prize, which is offered by the University of Newcastle for an outstanding body of work by a younger poet (Ziguras was born in Poland in 1977). And now we have Chains of Snow, his first collection.

Let me return to my remark about employing the technical skills of formal verse to compose poetry – and don’t worry: I am not about to launch into a lecture on prosody. Philip Larkin once said that ‘[w]riting poetry is playing off the natural rhythms and word-order of speech against the artificialities of rhyme and metre’. Metre is often thought of these days as a straitjacket, an inhibition to the imagination, but the skill in using it is precisely to lay across that underlying pattern the natural-seeming flow of grammar and syntax. Here are the opening lines of the first poem in the book, ‘Orpheus Turns’:

I hope it is apparent that there is nothing straitjacketed about the rhythms here, no sense of marching in lockstep with some imposed metrical grid. The sentences and their clauses proceed in unstrained and flexible conversation with the metre and rhyme scheme. Another sign of accomplishment in metrical poetry, particularly blank verse, is the ability to think ahead. Such poetry is not composed line by line, but in blocks of lines, or verse paragraphs. In the opening lines of ‘The Apple’, which is based on a medieval work purporting to recount Aristotle’s death-bed conversation with his students, we can hear the subtle handling of sentence structure, with first a two-line, then a three-line sentence, and finally a lengthy complex sentence unfolding over six lines.

In the hands of an uncertain practitioner you can sometimes almost hear the beats being counted out on the fingers. Not so here; you feel that thought and image come forth naturally and spontaneously embodied in their metrical dress.

Ziguras has studied, and teaches, philosophy, so it is hardly surprising that philosophers and philosophical questions loom large in his poetry. Even the titles of a number of the poems announce this: ‘On the Ancient Quarrel between Philosophy and Poetry’, ‘The Blind Philosopher’, ‘Negative Theology’, ‘The Problem of Induction’. What is striking and pleasing, though, is that this is never an abstract and bloodless inquiry. ‘He inhabits’, if I may quote my own blurb for the book, ‘a place of constant philosophical probing, but always embodied in the things of this physical world.’ Plato and his Forms are presented to us in all the pungent immediacy of a night’s haul of fish on the Piraeus dock:

For the richly evoked profusion of the world, what he calls ‘the plentiful display of what is lost’, we have these lines from ‘The Last Man in Pompeii’:

And, from the same poem, we can see his ability to sum up and encapsulate a passage of thought with a memorable image in such lines as these:

Chains of Snow embraces an enormous sweep of history, in case anyone is thinking that the world of ancient Greece and Rome is the setting for all these poems. By no means, and as a counterpoint to the depiction of ruined Pompeii, there are evocations of contemporary Sydney, and one of its notable ruins:

‘Derwent Street’ too offers a disquieting nocturne on inner Sydney, ‘wrapped in a body-bag/ Of plastic darkness’. How is that for an image?

Between these two worlds, ancient and modern, Chains of Snow ranges over epochs, places and subjects too numerous to catalogue in full here. There are ekphrastic poems, such as ‘Abraham and Isaac’, which meditates on the Rembrandt etching, and ‘Summa Theologica’, after Botticelli’s portrait of Aquinas. There is a very effective translation of Rilke’s ‘Spanish Dancer’ and a version of Trakl’s ‘Im Winter’. Also a powerful reworking and condensation of Zbigniew Herbert’s ‘Five Men’, entitled ‘Stone Courtyard’, which evokes the wartime execution of prisoners by firing squad with the same appalled clarity we find in Auden’s ‘The Shield of Achilles’. The shadow of the war in Europe falls over much of the book, and at its heart is placed ‘Yiddish Songs’, from which the book’s title is drawn, and where we find the poet on a balcony in Krakow with the ghost of Rilke at his side, contemplating that history and his place in it, his ‘right to these remains’. Chains of Snow is a powerful first collection in which intelligence and imagination in concert survey the world that humanity has built, and offer us the fruits of their inquiry in these poems and their memorable music.

This entry was posted in GUNCOTTON and tagged Jakob Ziguras, Stephen Edgar. Bookmark the permalink.

View all posts by Stephen Edgar on Cordite →