Review Short: Christopher Barnett’s when they came/ for you elegies/ of resistance 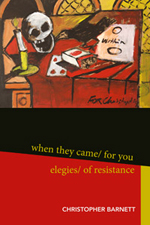 when they came/ for you elegies/ of resistance
by Christopher Barnett, Wakefield Press, 2013

Christopher Barnett is an enigmatic figure: an exile and outsider, an active and proud Socialist, Australian but long based in Europe because of feeling, as Mark Roberts asserts in the book’s foreword, ‘profound disillusionment with Australian society’ (ix). This deeply aggrieved, political book is a 300-page anti-paean purporting to eulogise Furkan Doğan, the North American teenager killed alongside eight others by Israeli forces storming the Gaza Peace Flotilla in 2010. But this book also contains the perceptions of an ageing poet grieving the loss of their own youth. Barnett’s memorialising is in the mode of a musical manifesto, in which the dramatis personae (Faust, Marx, Althusser, Apollinaire, Dick Cheney, Jeremiah, Trần Đức Thảo, Gregory Peck, et al) traverse either ideological or remembered space (Leningrad, Golgotha, Wangaratta, Babylon, Haiphong, Jerusalem, Salzburg, etc) in an effort for the poet to better display the ‘state of things// things of state’ (287) by which we are interpellated, instrumentalised, and commodified or, worse, in the way of monstrous and mobilised forces.

Barnett is striving against what he imagines as virtues of the age, ‘inattention and absence of concentration’ (318); rather than allow Doğan’s death to go unremembered, the poet announces ‘i refuse/ to allow/ others/ to forget’ (24). This ethical resistance is both clarion call and polemic, and the poet seems often to raise eyebrows and voice: ‘fuck them all’ (287) Barnett booms, unable to find any clearer way toward his heterotopic stance. The text travels in two columns down each page, and can be read either narratively (one column to the next), or as an experimental pastiche of apprehensions, the eye scanning all four columns (verso-recto) to splice images randomly. Both ways of reading extend the sense-making at work here: Furkan Doğan’s death is the result of those orchestrations of a systematic machinery; it is also an arbitrary outcome that makes no sense.

The book begins in the immediate aftermath of Doğan’s death, and Barnett’s wild outrage is delivered in monthly increments over two years, from (as the subtitles state) ‘juin 10’ to ‘mai 12’. The lines are short, unadorned, unpunctuated, and direct:

but in times told
do not last
so long
& lies
even less
furkan dogan
not yet
one week
since you were
takenfrom us
in an act
of common murder
that was
called summary execution
(21, 22).

These staccato, near-breathless lines are reminiscent of Célan’s indictment of Heidegger in the poem ‘Todtnauberg’, written after his visit to the disgraced NSDAP-supporting philosopher’s hutté (Heidegger rates a mention in Barnett’s book, as the ‘nazi philosopher’). But unlike Célan’s barely-present text, Barnett’s epic traversals perform no etymological excavation to strike more deeply toward the complexities of antihumanist imperatives (for more on Célan’s enactment, see Pierre Joris’ excellent ‘Célan/Heidegger: Translation at the Mountain of Death’). Instead, Barnett seems to simply accept the same, ipso facto, and every month for two years inscribes his call-to-recall and fight; this is not merely an enumeration of horror, then, but a hoarse non-scream in which the ‘details are incommensurable’ (91).

Halfway through his reckoning, Barnett momentarily shifts style. In an interlude (and then an interlude within an interlude), the text moves in the manner of a prose poem, and a litany of references (music to spiritualism, ideologues to dead demagogue poets) wander the pages –

‘trying to understand walter/ benjamin who wrote/ with his tears/ which is strange for marxist/ tries imitating steel/ you understand fiction having to go/ back to back/ back over old/ territory in night (153).

There seems no impulse to narrativise here, and a strange tension exists between these prose-like, forwards slashed sections and the plotlines so firmly established in the columned poems (that is, when these are read in sequence, column-to-column). Perhaps Barnett has no faith in that genre by which the world most frequently conducts affairs of the real? Perhaps this is poet who, as Roberts asserts, makes writing ‘with a rod of political steel at its core’ (vii) and who remains disinterested here in making prosaic sense.

Roberts also tells readers that this is a book to remind us ‘of what has been and is currently being done to us and our colleagues, friends and comrades’ (xi). Repeated on almost every page, Barnett’s insouciant calling of Furkan Doğan’s name comports antagonism, partisanship, contempt, and despair. Repeated often enough and we become semantically satiated; after 300 pages of ‘Furkan Doğan’, a reader is left wondering to what extend Barnett’s intended repetitions are purposefully designed. This name-of-the-son is near-homophonic and, at least for this reader, eventually morphs toward ‘fucken dogs’. This makes more sense when we understand how the poet fathoms his cri de guerre –

In a book that sets out to guard – not comprehend – the memory of this incomprehensible death, Barnett’s anguish readily and actively co-exists with animosity toward (as the poet may have it) the fucken dogs who took the life of this young activist.

This entry was posted in BOOK REVIEWS and tagged Christopher Barnett, Dan Disney. Bookmark the permalink.
Dan Disney is an Associate Professor with Sogang University's English Literature Program, in Seoul. He is currently completing a collection of sijo/stlings.