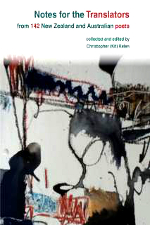 Notes for the Translators: From 142 New Zealand and Australian Poets
Christopher (Kit) Kelen and Jo You Chengcheng, eds
Association of Stories in Macao, 2012

Notes for the Translators from 142 New Zealand and Australian Poets steps into the fertile territory of literary exchange. It is a welcome invitation to poet-translators to immerse themselves in the work of contemporary Australian and New Zealand poets.

Christopher (Kit) Kelen’s introduction to Notes for the Translators demonstrates an editor open to possibility: the possibility of poetry in one language being reimagined in another. With a few exceptions, each poet provides a poem of no more than forty lines accompanied by notes addressed to a would-be translator. According to Kelen, these poems are ones that their creators ‘thought would present an interesting translation exercise’. Anthologies raise the behemoth of quality. Canonical authorisation is not the point of Notes for the Translators, which is about the possibilities of literary discovery and exchange. Varied in tone and style, these poems show antipodean poetic production to be expansive in its concerns. They open up possibilities for many different kinds of collaborative translations between poets and translators. If Notes for the Translators is an offering of poems to would-be translators, it is also a collection of poetry as sourcebook. In Kelen’s seductive term, it is ‘a book-for-the-making-of-books’, a book of potentials. From the poems presented and the accompanying notes, ‘translators will be able to offer readers a collection of contemporary Australian and New Zealand poetry’. Such a collection can take many forms. Kelen makes some suggestions, including an anthology of ‘antipodean celebrations and reasons to be cheerful’, but translators are free to bring their own creative vision to the task.

The publication comes out of the Association of Stories in Macao (ASM), which publishes poetry, fiction and other genres. A key aspect of ASM is ‘poetry translation by Macao poets, involving English, Chinese and Portuguese languages and in all possible directions’1. Its ethos is ‘to facilitate the East-West cultural crossing entailed in bringing poetry to the non-native reader’. ASM also aims to provide ‘Macao poets with a cross-cultural apprenticeship in poetry, through the vehicle of translation practice’. Perhaps liminal places such as Macao are exactly the kind of places for the provocation of publications such as Notes for the Translators. Kelen argues that ‘Macao has borne the symbolic burden of being for several hundred years (till the establishment of Hong Kong as British colony in 1831) the principal portal between China and the West’. Anyone who has been to Macao can testify to Kelen’s notion that ‘there is a powerful sense of the place in toto as transnational, and as liminal East-West space’. There is no need to limit Notes for the Translators by geography. Any translator, wherever placed, can engage with it.

Translation in Notes for the Translators is conceived as a creative exchange between poet and the ‘poet translating’. It is a gesture of invitation from one poet to another, a lyrical exchange of prosodies and languages. In it, one poet offers up a poem to the creative possibilities of another poet’s language. Kelen argues that the ‘poet translating’ is the reader he imagines for this ‘practical book’, which is mainly ‘intended for poets of the kind who are interested in translating poetry’. Pedagogically, ‘the hope is that this work will be a stepping stone for two mutually implicated apprenticeships — to train poets as translators, and to train translators to be poets’. Kelen envisages that translators will be both poets and native speakers of the language into which a poem is to be translated. Along with the provision of biographical details, an email address is given in most cases, so translators can have the choice of approaching poets for a deeper dialogue, ‘in order to translate more of their work, perhaps to create a parallel text selected poems for that poet’, or maybe ‘simply to ask more questions about the poem to hand’.

Notes for the Translators is the public initiation of a dialogue. Through the notes that poets provide to their would-be translators, the book purports to mediate the literary exchange. The book is also a declaration of the power of translation to cross domains of language and experience. And it demonstrates a belief in translation’s attractiveness for poets. The poet and translation theorist Barbara Folkart argues that ‘the name of the game … is to write’ a poem in the translator’s language rather than repeat the original poem2. Kelen suggests that ‘poems are produced by poets; this is no less true of translations than of originals’. The notes, as dialogue between poet and translator, are intended to ease the passage of a poem from one language to another, one culture to another. In Kelen’s terms, ‘they are a helping hand across the cultural/linguistic gulf’. Some notes address the question of translatability itself. New Zealand poet James Norcliffe hopes that his poem ‘along the groynes’ is ‘universal … in its language although it would probably have particular resonance for local readers’, while Australian Dan Disney says of his poem ‘To the Reader’ that he ‘will always prefer a “version” to an “exact translation”’ but hopes a translator can follow ‘the lineation if possible’.

While ‘a good translator is a poet’s closest reader’, to produce a good poem in translation is not easy. Kelen notes that ‘different languages present very different problems in poetry (as in other) translation’. To read through the offering of poems in Notes for the Translators is to wonder about their translatability. Kelen recognises that it ‘would perhaps be unrealistic to expect a translator to take on every style of poem (and every style of explanation) presented’. But the book gives ‘the translator ample material from which to pick and choose to suit a given purpose’. Kelen is aware of the sort of reimagining that translation requires when he states, in relation to the accompanying notes, that ‘it will be helpful if the poet can offer her translator a second (and secondary) tilt at the ideas in the work’. Kelen keeps the original poem and any translated version in tension with one another when he argues that ‘the objective of poetry translation is to produce a good poem’ in the translator’s language, but one that is also faithful to the original. But keeping the pedagogical in mind, Kelen writes that ‘the point of interest … is that poetry and translation have an affinity as processes, again explaining from another angle the value of any kind of translation as an apprenticeship for poets’. Translation is a way to train poets in the art of poetry.

Pages: 1 2
This entry was posted in BOOK REVIEWS and tagged Kit Kelen, Tina Giannoukos. Bookmark the permalink.
Tina Giannoukos is a poet, fiction writer and reviewer. Her first book of poetry is In a Bigger City (Five Islands Press, 2005). Her poetry is anthologised in Southern Sun, Aegean Light: Poetry of Second-Generation Greek Australians (Arcadia, 2011). Her most recent publication is the sonnet sequence in Border-Crossings: Narrative and Demarcation in Postcolonial Literatures and Media (Winter, 2012). A recipient of a Varuna Writers Fellowship, Giannoukos has a PhD in Creative Writing from the University of Melbourne and has read her poetry in Greece and China.