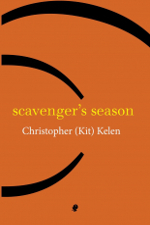 For some time I’d been carrying Christopher (Kit) Kelen’s Scavenger’s Season around in my backpack, where it jostled with other books, pencil shavings and an old apple. I happened to finally reach for it and dust it off while in the members’ lounge of the NGV Ian Potter Centre. I opened to the first pages and read until I hit punctuation – 10 pages in – and then walked through to the John Wolseley exhibition, Heartlands & Headwaters (11 April-20 September, 2015). I hadn’t planned it this way, but they’re an apt pairing.

Wolseley’s method probably needs no introduction. His art is process-driven. He sits himself in a sphagnum swamp, for example, to sketch, close up, the peculiarities of its surface, the paper sometimes getting damp or muddy. Or he drags high-quality art paper through charcoal-tinged, fire ravaged bushlands as a form of drawing. Wolseley wants the landscape to work with him; to build up a presence on the paper. Heartlands & Headwaters also includes numerous works that he has either buried or left to blow around in the bush for months, returning later to retrieve them. The paper is stained, ripped and beetle-eaten and wonderfully scratched/sketched. It has often turned in on itself like curled bark. There are moments or sections within his drawings that reach something of an aesthetic sublime. Large drawings vibrate with colour and markings (some are made with animal carcasses) and they tangle with history and science – environmental, ecological, political. Almost in spite of these moments of aesthetic beauty, I think the success of Wolseley’s art lies in this process, and moving through the exhibition it became increasingly obvious just how difficult it is to exhibit his work. (No doubt he’s also frustrated by the gallery, preferring to be sloshing about on a muddy bank out bush somewhere.) The NGV opted to place his curled paper works as if they’d blown about in the gallery, pinning them haphazardly up on large internal walls. I found the hanging a bit off, the analogy a little shallow. I’m not sure how else they could be presented, but I feel the curators might have simply allowed the surface of the paper to express the process.

I learned to appreciate Kelen’s poetics, via Wolseley. The blurb on the back of Scavenger’s Season tells us that the book ‘represents a quarter century’s poetic engagement with a place. In this case the place is five acres between two forests – at Markwell via Bulahdelah, in the Hunter Region, on the NSW North Coast.’ You feel Kelen would prefer to keep the expression of landscape like a long, sight-specific walk, dusty and as visceral as possible in the final draft; meandering muddy trudge through the bush, testing the way by battering a good stick on the ground to warn against snakes, all the while remembering ‘twelve years of dust between the selves’.

Kelen’s phrasing and imagery shift around between and within the poems. There’s a restlessness, it seems, in his relationship with contemporary poetics. At times there’s colloquialism, a jokey tone, biblical language, even an iambic rhythm. For example, there are poems about blokes (‘Blokes’) about chooks (‘bantams’), sheds (‘Shed’) and ‘the old bush television’, each with some familiar phrasing: ‘goanna knows a tough old bird / and won’t be fooled by appetite’. Yet, in the same poem, Kelen eases over to something more original: ‘there’s a sun scratching over / a weather vane’s rise’, as if to grapple with the lines before it, to renew the language. Sometimes each stanza runs to the next quite conventionally, but then the reader is tripped up entirely to realise there’s a halt to the poem’s logic. Take a section from the opening poem, ‘think of this’:

Here, too, are examples of Kelen’s approach to rhyme and, as in those last two lines, a sudden embrace of a somewhat intrusive metre. The fragmentation also works to subvert religious allusions or the strongly contemplative tone. Kelen uses fragmentation on a micro level, too, by removing a preposition here and there, or leaving a word out. Both of these techniques of fragmentation are evident in the poem ‘truth is always read out of the air’:

It’s a halting, searching, finicky mode – fossicking in among his own lines, his own thoughts, tinged with this memory of the landscape in Northern NSW.

Further, and like Wolseley, Kelen’s forms can seem dictated by the landscape itself, and this effect is exacerbated when the subject matter or fauna interferes with the poem’s motion, as in ‘wrens feather the scrub and the messy edges / go for the accidental intensities’, from the painterly poem, ‘time with the sky’. It’s a link back to process: ‘a breeze sets to paper / day fades the signs’ (‘minor manifesto’). Kelen also uses some unusual line breaks, again energised by the discomforting jag of the landscape he’s describing. In the poem ‘view of the ocean’ it’s as though the wind has eroded the poem, causing stanzas. There are furrows all through the forms, and this effect works particularly well when the poems are unpunctuated.

In reviewing Scavenger’s Season for the Australian, Geoff Page writes: ‘It’s interesting to note in passing too that the punctuation in (the poem) ‘Blokes’ is orthodox. This reader’s inclined to think that many of the other poems in the collection might have benefited from this strategy too.’ I disagree and feel the unpunctuated poems create much more movement, a flickering imagery. Originality, in Scavenger’s Season, often depends on the absence of punctuation – it opens the poems out to energy and surprise, and the contemporary.

Curiously, when I did hit punctuation for the first time, on the eleventh page, the line was: ‘There is no grammar you can trust.’ This long poem, ‘Shed’, plays on the double meaning of the titular word. It is typical of this book in that the reader finds some straightforward or banal phrasing and rhythm: ‘In a shed there must be room to stretch, / a beam that you can dangle from // to let limbs loose.’ This is followed by a more vibrant use of syntax, music, philosophy: ‘So many things / shed are lost but memory holds all in / and so it is elemental with tin.’ Three lines on we have: ‘Great outdoors are all in a shed.’ This little pun sits lightly within the poem but it is assumed that the more weighty philosophical complexities of the poems will elevate the lighter moments, turn their language inside out, with further reads.