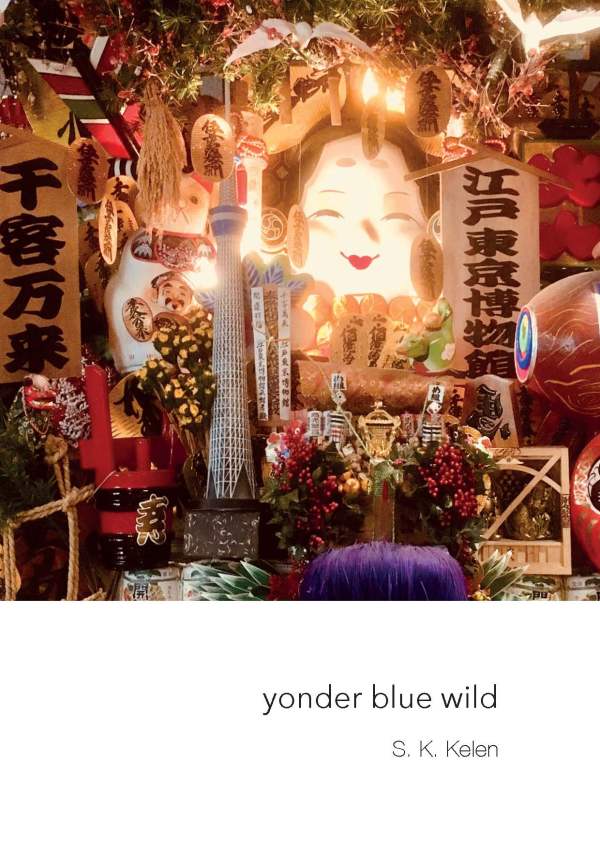 Award-winning author S K Kelen beautifully explores the theme of travel in his collection Yonder Blue Wild. For some, travel is a benefit awarded to them by virtue of their class; for some it is a tool to attain an idealised version of the life they want to lead. For others, travel is something they have no choice in. The connecting thread is indeed a kind of escapism, and an attempt to express, through movement from place to place, one’s own humanity. In that expression hides stories untold.

Kit Kelen’s collection Poor Man’s Coat complements the theme of his brother’s collection, as he looks at conversation and argument as expressions of personhood. The interesting parallels between the collections are their ability to pronounce these themes through mirror poems and window poems. Mirror poems function as poems that connect people with themselves by way of revealing the self to oneself – the key feature being revelation. Window poems are observational poems that provide the self with insight through observation.

The effect of reading the title, Yonder Blue Wild, contradicts the theme of the collection. Each noun, ‘yonder’, ‘blue’, ‘wild’ stands alone, only moving with when animated by the reader. They are like the state of a stagnant person suddenly moving after unexpected change, triggered by their lack of control. Change is an invisible signpost required to adapt in the world. We have no choice but to be alone in this world even though fighting it seems natural – drugs or alcohol or sex or the chaos of people. The theme of the collection is that travel is part of the human experience, but for me, a person whose stomach begins to turn at the thought of travel, reading this work automatically calls into question the idea of a collective existence. I find it difficult to ignore the idea of travel as an opportunity to temporarily glaze over being born into this world without choice.

What do we have if not our context? It’s a position from which our humanity can be found. In his poem, ‘Love In The Tropics’ S.K. Kelen gives context to his characters. It is precisely due to the contextualisation of their scenario that Frank and Kathy are understood in a complex fashion:

‘Love In The Tropics’ sheds light on a reality that is too often ignored and or is too painful to acknowledge. Kelen speaks to a kind of exhaustion that takes place when a person doesn’t confront the state of their relationship. Such exhaustion eventuates into dysfunction. This is indeed the beauty of poetry: its commitment to the reality of the lives of people and its strength to hold two otherwise opposing things in equality. What is the root of Frank’s exhaustion? Is it his relationship with Kathy? Is it his insistence at ‘making eyes’ at Yvette? Similarly, with Kathy: is she jealous? Should she be?

If poetry guides us to take life as it is, then what happens when change doesn’t occur by virtue of our stubbornness? Will poetry be lost? I must make mention of John Keats’ poem ‘On the Sonnet’: ‘If by dull rhymes our English must be chained’. He fears that if a change in form doesn’t occur, the beauty of poetry will be lost. He uses Andromeda, known for her beauty as well as getting chained up, as a simile for the ruins of poetry. Although Keats speaks about the consequence of adhering to the rules of a sonnet, he sticks to the rules. This draws a comparison to Kelen’s poem when he writes ‘& life goes on’, calling upon an objective truth about the world, a universal law, despite his contextualization of his characters’ conflict. Like Frank, many of us continue on our path:

Like Frank, we suffer through life in tiny ways as our pain nibbles at us. In S K Kelen’s poem ‘Tiger Show’, however, we see a different perspective on the notion of evolution. He stops his characters to ask: ‘What are you doing here, middle aged Australian / couple?’ A question as universal as love, a question that forces us to a stop: ‘Left the kids at home, let loose / seeing Bangkok’s dizzy lights / before it’s too late’. The difference here is evolution triggered by outside forces, of evolution starting to manifest outwardly.

Pages: 1 2
This entry was posted in BOOK REVIEWS and tagged Kit Kelen, Magan Magan, SK Kelen. Bookmark the permalink.
Magan Magan is the author of From Grains to Gold (Vulgar Press, 2018). He was a 2018 Wheeler Centre Hot Desk Fellow and co-editor of two anthologies, Growing Up African In Australia (Black Inc, 2019) and Volume 7 Australian Poetry Anthology.