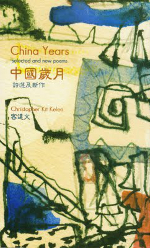 Australian poet Christopher Kit Kelen’s most recent collection, China Years: selected and new poems, contains English and Chinese pieces, presented side by side in translation, along with original artwork. Kelen’s strong interest in translation is immediate on the front cover and throughout the collection, highlighting a focus on creating points of access. When paired with Kelen’s original ink and watercolour drawings, interspersed as breaks throughout the text, a reading approach that is both fluid and inclusive is encouraged.

A considerable number of sources are covered in this book, with a general connection via geographic and linguistic concerns, separated initially by their date of publication. However, this separation is proven easily traversed; the collection appears to evolve from one piece to another, acknowledging turning points but constantly moving. The inward reflection of the later poem ‘I swim through’, for example, is as wryly reflective as the earlier New Territories poems.

Kelen’s views on Hong Kong are particularly interesting. The presentation of the ‘Tai Mo Shan’ series and extracts from the New Territories collection signifies an artist’s journey from the highest mountain in the New Territories to, somewhat ironically, the central hotspots of Hong Kong. The name of the latter collection is geographically misleading, suggesting slippage in the speaker’s journey, but without any sense of accompanying hostility or strong alienation. Kelen’s affectionate pessimism in his address to the city, and sensitive treatment of natural and man-made boundaries are compelling. China Years’ delineation of sections in this instance recognises, but does not enforce boundaries between interior and exterior, natural and artificial.

An example is the poem ‘Wanchai’, as the English and Chinese texts both contain the brand name ‘Hello Kitty’. The brand is particularly stark as an English phrase, nestled in the opening and ending stanzas of this poem

Interestingly, the brand itself contains a greeting, and forces communication. The poem fixates on acts of commercial consumption, invoking the urbanity of Wanchai and its markets, but is not bereft of human connection. Access and exit points, suggesting a form, participate willingly in the sideshow. In the final stanza, this freedom is emphasised:

Despite the poem’s wry references to commercial interests, as well as unappealing sights – ‘the disinfected underworld’, ‘the speech of brute metal, / doormats and arseholes, / a duty to choose at every turning’ – the emphasis remains on the choices of the speaker. This is not a wholly pessimistic indictment of the material interests of the area, but a reflection of the speaker’s willing participation. Notions of dominance are prevalent, but a subtle form of control is available to the speaker via these politics of access and departure. It is this multiplicity of tensions and subtle angles of reflection that characterise much of Kelen’s work.

A similar atmosphere is created in ‘the loudest place on earth’, as the speaker now moves into other industrial settings, referring to Yau Ma Tei, Sham Shui Po, Prince Edward, Mong Kok and TST (Tsimshatsui). The familiarity of the speaker with these spaces, evident in his use of the TST abbreviation, counters his unflattering descriptions of ‘diesel breath, / pork fat dripping’ and ‘some fast grub tunnels under the city’ in the poem’s opening, suggesting an affectionate critique, rather than strict condemnation. The comparative isolation of ‘Wanchai’ is swapped for the pointed presence of friends and family:

This piece was taken from Kelen’s fifth volume of poetry, New Territories, which was described by Kelen as ‘a pilgrimage through Hong Kong, structured after Dante’s Divine Comedy.’ This is clearly reflected here; bodily damage incurred through the journey is converted to a purifying experience and Jonah-esque rebirth. Interestingly, the spaces themselves are pushed to the side, despite the title’s geographic focus. Instead, the pilgrim’s questions are directed both outward and inward, excusing the setting and lightening the tone.

China Years invites re-readings. The collection’s appeal extends beyond its generous geographic, literary and linguistic references, in that it offers purchase for an exceptionally wide range of readers. Its bilingual presentation combines with Kelen’s dynamic ink and watercolour artwork to offer additional access points for readers.

This entry was posted in BOOK REVIEWS and tagged Kit Kelen, Siobhan Hodge. Bookmark the permalink.
Siobhan Hodge has a PhD in English literature. Her thesis focused on Sappho’s legacy in English translations. Born in the UK, she divides her time between Australia and Hong Kong. Her chapbook of reflections on Sappho, Picking Up the Pieces, was published in 2012 as part of the Wide Range Chapbooks series. She is currently the Reviews Editor for Writ Review and an Associate Editor for Rochford Street Review. She has had critical and creative works published in a range of places, including Westerly, Axon, Contrapasso, Peril, Plumwood Mountain.