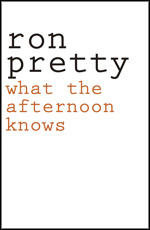 What the afternoon knows by Ron Pretty
Pitt Street Poetry, 2013

For Ron Pretty, the everyday is marvelously complicated. He’s in a hotel bar in Wales, the Welsh Dining Club is ‘eating out in a language rich and strange’, a birthday party is ‘agog with singing’, two young men are flirting with a blonde waitress ‘who shocks me with her flush / of free flowing hair’. Then, suddenly, he’s back in Junta-ruled Greece 40–odd years ago, involved with a young woman who, ‘behind closed windows’ is ‘singing for love, singing for freedom’ in a town with ‘rifles guarding the bakery’. Then back to Wales, and the two young men exit the bar holding hands with each other, not the waitress, who ‘takes my empty / memories and smiles as I too climb the stairs’.

This poetry is about complexity of the commonplace and mysterious connection. Pretty relishes humanity’s contradictions and frustrations. He’s on top of his craft, shrewdly observant, witty, practical rather than flashy, never tired.

‘Argini’, the poem noted earlier, is the fifth in the book, but themes of memory, age and ‘what’s underneath’ flourish from the start. The first poem, ‘Theseus At Eighty’, opens:

But under the white hair, other things are happening. The poem is as much about guilt and suppressed memory as imminent Parkinson’s disease:

Background knowledge of Theseus helps here as this poem is packed with the legend’s imagery, and readers who do not know that connection will miss a great deal. In the last two lines above, for instance, the short sentences are significant yet are not explained; it’s surprising that a poem with many external allusions was chosen to open the book. Still, it’s a striking piece. Typically, Pretty supplies enough information to make his poems self-contained and approachable to the reader (he is, after all, primarily about communication). He enjoys himself playing with tropes that invoke King Lear, Juliet, Lazarus, Rupert Brooke and Keats … yet, occasionally, the lines sag to a bit cheesy: ‘Hey, Rupert, I’ll brook no interference’, from ‘Rupert’.

Pretty’s modernist-tinged eye is cool and ironic, as in ‘From The Terrace’, a poem about transcendence (with a wink to Prufrock’s mermaids):

He watches the moon ‘bloated and rising’ with ‘silent cranking’ as it’s ‘levered across the eastern rim’. He sits ‘listening to the lies it has to tell me’, yet he’s at peace, ‘listening / intently as the first Adam in the silence’ …

Lyric is not his favoured mode. At times, Pretty forgets himself and abandons the wry, worldly edge, as is evident in the first half of the beautiful ‘Four Hands’:

The language is inventive and sharp throughout the book, but these poems have destinations, plenty to convey and believe in getting on with it. Beneath the conversational tone, a narrative drives.

The collection’s range is broad. There’s sly humour in ‘Barista: A Love Story’; Australian attitudes are satirised in ‘Anthem’ when ‘my anthem sings of citizens tired of politics / and all who threaten them with the future’; and apocalypse follows in ‘The Last Half Hour’.

What the afternoon knows arrives in three sections. The first is a wide-ranging collection of themes and style; reflective, humorous, occasionally fierce. The second is a sequence of 15 sonnets, also in a variety of styles, including typographical forms split into columns that can be read across or downwards. Section three opens with a fine series of poems on overseas adoptions from different points of view. In ‘Folders’, a Sri Lankan lawyer is handing to four anxious white couples the details of children whose impoverished mothers have agreed to give them up. In ‘Doubts’, an adoptive mother feels secret guilt. ‘Planes’ explores the loss felt by birth mothers who’ve surrendered their children. ‘Blue Movies’ catches the racist nastiness adoptive mothers can encounter in Australia as ‘a stranger’s face looms over the pram’:

Apart from exploring contemporary legal and moral issues, poems in this section operate as metaphor for the randomness of life, birth, and have yet a third resonance – ruminating on Australia’s ‘stolen children’.

In a poem titled ‘Envoi’, Pretty begins with a Swedish proverb, ‘The afternoon knows what the morning never expected’. The poem reflects on life from his isolated childhood to the discovery of teaching and women (in random order), love and children and an afternoon full of writing. This is a rich collection from a life well examined.

This entry was posted in BOOK REVIEWS and tagged John Upton, Ron Pretty. Bookmark the permalink.
John Upton’s poetry is in Best Australian Poems 2014 and 2015. It has been published in leading newspapers, literary journals and anthologies. His first collection, Embracing The Razor, published late last year by Puncher and Wattmann, was short-listed for the Anne Elder Award. He has had five stage plays produced and has written for more than 20 television drama series. He won the Australian Bicentennial Play Competition, the Australian Writers Guild’s award for Best New Play, and (jointly) New Theatre’s 50th anniversary play competition.