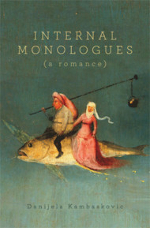 Internal monologues: (a romance) is Danijela Kambaskovic’s first poetry collection in English. Her two previous collections, Atlantis and Journey, were written in Serbian. Each monologue is voiced with relative simplicity, but don’t underestimate Kambaskovic. She uses English most vibrantly, which sets her apart from the native speaker. Her choice of words and ‘word play’ seems entirely alive and vibrant, as if she was approaching English in new and exciting ways.

This ‘poem-book’ is essentially a mythography with a twist. Its subject matter is wide-ranging and incorporates the often lovelorn stories of classical mythological figures, Shakespearian characters, Biblical notables, fairy tale types and individuals from history. Internal monologues is just that: private addresses to a lover or loved one.

Kambaskovic helps reignite fiery personalities and her diversity of individual voices is strong. By way of examples, Cupid speaks to Psyche (‘Between waking and sleeping / I kissed you open and licked your heart’), Ulysses and Circe hold a dialogue, and then later Penelope gets an opportunity to speak to him (‘… a soft / translucent kiss / of the warm sea’). Hamlet and Ophelia also address one another (‘I am your blood plum: ripe, good.’).

Internal monologues is presented in four parts and act as the four chambers of the heart. The monologues are mostly presented as suites, with 2-3 poems used to convey most speeches. A few suites are longer, there are also single poems, and Kambaskovic provides some of her characters with the opportunity to respond to their lovers, which makes for interesting reading.

However you package it, a cycle of voices can be challenging to write. It is difficult to sustain the momentum of narrative and to provide enough space for the reader to journey through it in their own way. Yet voice cycles do come with a tremendous amount of creative freedom for the poet that’s just not obtainable in a traditional collection. And I can say in all honesty through my own work that such freedoms are where the fun resides, where the true and pure sense of play begins. This playfulness of words is in healthy proportions in Internal monologues.

A good example of this joie de vivre is Andromache’s monologue to Hector where she explains, ‘the problem with being alone— / it takes foresight’ (‘Andromache to Hector’). And a little earlier in the monologue she utters:

And carrying on the theme of children, yet in stark contrast, Kambaskovic’s Mary says to Joseph:

Overall, Internal monologues is a confident and competent collection. It’s a wild ride and this reader enjoyed Kambaskovic’s boldness and sense of impishness throughout. The collection’s 104 pages feels like an easy read, but don’t be fooled by the book’s subtlety as it holds many layers. It also helps to know the subjects Kambaskovic writes of, and although she never strays too far from Shakespeare, Homer and Ovid, her reinvigoration of well-worn characters is impressive. It’s a great gift of Kambaskovic’s that she allows them to stand in fresh clothing. Internal monologues is a fulfilling celebration of love, especially the messy bits: forbidden passion, rapture and love gone horribly wrong to name but a few.