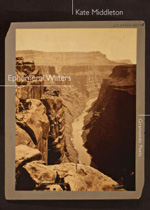 For her second poetry collection Ephemeral waters, award-winning poet Kate Middleton followed the course of the Colorado River. The Colorado’s 2,330km journey begins in Rocky Mountain National Park. That journey should end at the Gulf of California but, as Middleton explains, ‘the river has so many hands dipping into it that it no longer reaches the sea’ (‘Reflection, after’).

Ephemeral waters is a book-length poem comparable to Alice Oswald’s homage to a river, Dart. Each work is a river-map of voices. Both aim to increase people’s awareness of water as a natural resource. Oswald spent three years recording voices from interviews with people who lived and worked on the Dart in Devon, whereas Middleton spent only a handful of weeks physically exploring the Colorado. But Middleton draws upon years of research. This makes its way into Ephemeral waters as segments of geological surveys, as quotes from archival documents and films, and through conversations with river guides and Park Service volunteers ‘in their matching ranger-green’ ( ‘I – Colorado’). As in Dart, marginal notes are central to the lyrical narrative of the collection.

Middleton begins Ephemeral waters with instructions for the journey before she reaches the source of the river: “… a trickle / a rill / a thread of water / you can easily straddle” ( ‘I – Colorado’). She ends the poem with a river prayer in Sonora, Mexico:

Middleton’s ‘Instruction (prologue)’ reads more like guidance from a seasoned traveller than novice explorer contemplating the journey ahead. Prologue therefore becomes postscript in the same way an older version of self might wish to speak of lessons learnt to a younger self. In Ephermeral waters Middleton progresses from wide-eyed tourist to meditative wanderer, growing ever pensive about the Colorado’s future. Instruction leads to song and song to prayer.

In its poetic form Middleton’s journey is often fluid re-creation. Stanzas snake along the book’s pages to convey a conventional river shape. Liquidity remains key to the narrative, so too double-spacing, as if the poet has placed her words lightly on the water’s surface in order to watch them move with the river’s flow. In many ways such representation allows the book to become a vessel, a means to contain the river within an assemblage of experiences.

For me, the best photographs always inspire curiosity, rather than satisfy it. I think that this ambiguity is one of the most thrilling aspects of the medium. A photograph is only a minute fragment of an experience, but quite a precise, detailed, and telling fragment. And although it might only provide little clues, the photographer is telling us that they are very important clues.1

Ephemeral waters illustrates Soth’s aesthetic of curiosity as it provides small, exact and crucial clues about an experience. To read the poem is to ‘dip into’ fragments rather than be satiated by sources. This minimalist touch fosters the onward movement of travel and of travelling the river’s course.