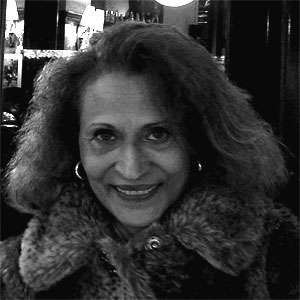 Suzanne Dracius is a prize-winning writer from Martinique whom the French Cultural Minister has called ‘one of the great figures of Antillean letters.’ She writes in French and peppers her work with Creole, drawing on themes of ‘métissage’ (refers to the blending of two distinct elements, in either a biological or cultural sense) and ‘marronnage’ (refers to the flight of slaves from their masters). In addition to Creole, Dracius makes generous use of Latin and Greek, as well as rare French words and verlan (French slang which reverses the order of syllables in several common words). Dracius often references the finely calibrated racial distinctions on the black/white continuum found in Martinique, including calazaza women like herself, known for being light-skinned, multi-racial, and having red or blond hair.

While traveling to Martinique last year, thanks to a grant from the Arts & Humanities Council of Montgomery County, I had the pleasure of meeting Dracius. Although we had exchanged countless emails while collaborating on the translations, I found it invaluable to work with her in person, as well as to see with my own eyes the landscapes described in the poems. She was a gracious hostess who showed me around the island, including the deadly volcano that overshadows the town of Saint-Pierre, as well as the stunning Caribbean beaches at sunset. She even introduced me to the president of Martinique, Serge Letchimy.

These two poems are part of Dracius’s only collection of poetry, Exquise déréliction métisse (Calazaza’s Delicious Dereliction). They have never before appeared in English.


Ferdinand, you fled Paris …
Jean-Claude, did you tread upon the heels of Cassegrain, your rabbit Muse and confidant?
Like a Maroon, you escaped to some other place: “Run away, we must run away,” dixit Césaire.
Ho, Jean-Claude, ho! O la ou yé? Where are you?
We’ll no longer call on our painter friends at Barbizon, hail the manes of Millet as we did in the past, with Elvire, lively and full of pranks, like an elf in Fontainebleau Forest.
Without doubt, in a single leap, Cassegrain will have lead you to see Langston Hughes, Duras, Césaire, Chester Himes, or to glide over Artibonite …
To romp from the urban Marais as far as the outer bounds of the true Elysian Fields where you will feel at ease.

This entry was posted in TRANSLATIONS and tagged Nancy Carlson, Suzanne Dracius. Bookmark the permalink.
Nancy Naomi Carlson is a senior translation editor for Tupelo Quarterly and Blue Lyra Review. She has published award-winning chapbooks, a collection of poetry, and Stone Lyre: Poems of René Char. Awarded grants from the Maryland Arts Council and the Arts & Humanities Council of Montgomery County, her work has appeared or is forthcoming in such journals as The Georgia Review, The Iowa Review, Poetry, and Prairie Schooner. She coordinates the graduate school counseling program at the University of the District of Columbia in Washington, D.C. Carlson is a recent recipient of an NEA literature translation grant.

One Response to 2 Poems by Suzanne Dracius