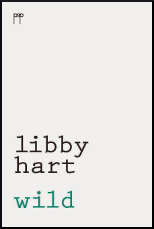 Poetry might be whispering these days, but only fools fail to hear it. The whisper might be the tough sibilance of protest, it might be the swirl of nostalgia for what will soon be lost and irretrievable, it might be the resilient, gnomish murmur that tells of what cannot be suppressed, and cannot either ever be quite directly expressed. And so, Huginn and Muninn open Libby Hart’s new collection of poetry.

It is fitting that they are the voices of two ravens. The Little Raven, Melbourne’s ubiquitous crow, was the constant presence at the local tip across the road, or in vacant blocks of land nearby, or in the backyard trees of my childhood; they were the strong and insistent scavengers growing healthy on the detritus of our suburb. When we are gone, they will be there, still feasting.

Libby Hart’s ravens are whispering to the gods about the stars, encouraging the ferocity of the bear-woman of Ursa Major, singing a song to the song of the Southern Right Whale, meditating on the washed up corpse of a cormorant, and then there is the inked raven itself in a poem. The poet’s namesake, her ‘stag’, is given a small portrait among these wild ones:

This is a poetry of craft, asking the reader to notice and savour the half-hidden near-rhymes on ‘branch’ and ‘slant’, ‘hidden’ and ‘still’, and even ‘startled’ and ‘half’. It is a murmur of music, as if the poetry has been bewitched by its being itself. Hence, the line, ‘I know nothing of mustangs, but their beauty’ to introduce these feral horses.

‘Pluma’ from this first section of the book is one of the most beautiful and mysterious poems I have read this year. It seems to be a creation poem, a reversal of evolution, and a song of beginnings. From its first line, ‘We buried gravity and took flight’, it is breathtaking.

This poetry is imbued, ‘shaken and shaking’, with the names and sounds of Libby Hart’s other home, Ireland. The windful coast of Mullaghmore, the speckled mountain of Bricklieve, and the ovum of Smerwick Harbour are here, connecting the poetry to an idea of Ireland and an experience of it. It becomes an ‘alchemy of inner life’ without pop psychology or an egoistic ‘I’ interfering.

The second section of the book, ‘Murmurations’, does not move out of the reach of the spells of the natural world’s wildness. It finds itself drawn back to the murmurations of starlings in Rome via the ‘smack’ of a tsunami. There is more of the urban world, the human and personal, in this section, though never at the expense of birds. Her poem, ‘Blueness’ is one to put beside Philip Salom’s stunning poem to blue, ‘A Little Bit of Colour’ from his Sky Poems of 1987. Her ‘Elegy’ to Anthony Gerard Morris is one to put beside Sharon Olds’s equally compelling ‘To See My Mother’ from One Secret Thing (2011).

This is a book to enjoy immediately, then return to later and be surprised at how lovely, enveloping, and wild these poems are. This is what you might call careful poetry, a poetry that’s not wild in the Chris Mansell sense, for it is always controlled by a reflectiveness and a music in the language. Its world, though, is as wild and swirling as any world you would want to find yourself inside. Be warned, this poetry cannot be taken too quickly, or in large swathes. It is a deep drug. The book, too, is a simple and beautiful object, the paper thick and warm. Pitt Street Poetry know how to package poetry.

This entry was posted in BOOK REVIEWS and tagged Kevin Brophy, Libby Hart. Bookmark the permalink.
Kevin Brophy teaches creative writing in the School of Culture and Communication at the University of Melbourne. He has had 13 books of poetry, fiction and essays published. He is a winner of the Calibre Prize for an outstanding essay, the Martha Richardson Medal for poetry, and has been shortlisted for the Vogel Prize and NSW Premiers Prize for nonfiction. From 1980 to 1994 he was founding co-editor of the literary journal Going Down Swinging with Myron Lysenko. In 2012 Walleah Press published a collection of his prose poems in Radar, a book that featured the work of both Kevin Brophy and Nathan Curnow. His latest book is Walking,: New and Selected Poems, published by John Leonard Press in 2013.