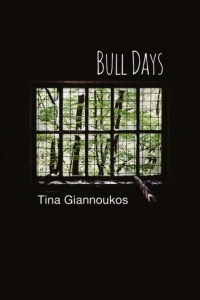 The first poem of Tina Giannoukos’s second collection ends with the line, ‘In space I hold the horn of plenty’. This reference to the classical symbol of abundance foreshadows the poetic landscape that follows in Bull Days, a volume teeming with external allusion and internal reverberation. Giannoukos’s primary subject is a romantic/erotic love relationship, which is dissected in a series of 58 disparately patterned sonnets. In early incarnations the sonnet form was, of course, commonly applied to the theme of love, and here Giannoukos follows tradition, imbuing much of the work with a vivid sense of lyrical presence. This presence is maintained through constantly fluctuating tonal effects – melancholic, vexed, ironic, mournful are but a few – causing the lyrical ‘I’ (who addresses an unnamed ‘you’) to declare late in the volume: ‘These shifts in mood are impossible to endure’. But endure it does, through ‘the long hour of the love poem’ (as sonnet XXXVIII puts it) which comprises Bull Days. For it is feasible to conceive of this sequence as one long poem: while its pieces record diverse and seemingly discrete events, it constructs, overall, an undulating narrative shape.

One of the ways Giannoukos creates this sense of narrative is through the recurrent motif of journeying. Varying images convey this motif: trajectories of planets, migrations of birdlife, seafaring ancestors ‘gliding over oceans’ for instance. In the latter image Giannoukos deftly connects her own particular Greek heritage to classical antiquity – a period much characterised in literature by voyaging. Doorways to antiquity abound: ‘epic journey’, ‘heroic / lover’, ‘fallen stones and collapsed columns’ are a smattering of the phrases that evoke Greco-Roman civilisation, as do the many appeals to gods and mythological figures. That poems travel between present and past, and, indeed, into the future, and recount the overlap between these realms when it comes to love, has more than narrative impact; it is of purposeful philosophical significance. ‘All loves are linked’, sonnet XI offers, while sonnet XXXVIII locates love in its own space-time:

For me, the metaphysical exploration of time carried out in Bull Days is one of its foremost achievements. Giannoukos’s sustained investigation into the ways in which the condition of love refracts differentially through what Gilles Deleuze names the crystal image of time (that is, time beyond horizontal, linear understandings) is both artful and evocative.

Other cultural touchstones mark these sonnets apart from those associated with secular classical times; much Judeo-Christian imagery is rhetorically employed, and references to Renaissance artists such as Shakespeare and Da Vinci appear here and there. But it would be remiss to move on to other matters without considering the strong resonances of ancient Hellenic poet Sappho throughout this work. Sappho’s poetry is alluded to both subtly and overtly (‘Fragments survive’, ‘Is this the Sapphic line? O sweet! O love!’), and Sappho’s non-normative female gender position finds echoes in Giannoukos’s occasional splitting of the female self (the ‘I’ sometimes slides into ‘she’, and in sonnet XI the ‘I’ is ‘in drag’). More crucial, perhaps, are the parallels between Sappho’s and Giannoukos’s characterisations of love. Anne Carson, the classicist who has made a study of romantic love in philosophy and literature, points out that it was Sappho who first called eros ‘bittersweet’ (‘glukupikron’). Giannoukos, too, employs this term: ‘Bittersweet lips angle me in sharp relief’ (LVI). Carson notes, also, that it’s difficult to translate Sappho’s glukupikron: strictly speaking, it should be ‘sweetbitter’. Carson surmises that Sappho meant to indicate that eros brings sweetness, and then bitterness, in that order. Overwhelmingly, the poems in Bull Days support this view. Love here has a ‘dark energy’ that begins as ‘rapture’ but ends in suffering, as sonnet VII suggests:

But Bull Days also presents love as a game of passion difficult to resist. More than once a bullfight scene is metaphorically employed (hence the collection’s title), and although the ‘I’ in these poems is the bull, destined for death, it participates willingly. More broadly, games and play are frequently cited tropes of human desire, and – as artists and thinkers have expressed for millennia – desire is an experience fraught with paradox. It is put this way in sonnet LIV:

Generally, this promise is what provides the sequence’s narrative drive, which concludes uneasily. ‘I’m back where I vowed I’d not return’ the final sonnet begins, the ‘I’ having been lured back, by desire, into ‘gambling on signs’ that are destined to remain empty. In relation to language-as-signs, Giannoukos also deploys a metapoetic stratum, reflecting on the role of words in this love game: ‘if I want a place in your canon / I must impress with my poetics’ sonnet XXV states, and there is much toing and froing between ‘voice’ and ‘silence’. Sonnet XV draws attention to ‘the cascading deluge of words’, and latter poems plead, ‘what if I were to tell you … ?’. Ultimately, though, the speaker admits that this is a game she cannot win; she is essentially ‘[w]ithout / words to describe the colour of [her] love’ (LIII).

On the whole, language operates across these sonnets at an intensely affective level, matching its subject matter, and this is another of the work’s strengths. Giannoukos also displays impressive skill in weaving together such a vast array of figurative elements, and in employing lexical and thematic repetition as a structuring device in the absence of consistent metrical and rhyme schema. Undoubtedly, some readers will find Bull Days heavy going due to its complex manoeuvring of meaning levels, and its occasional metaphorical discordance. Contrariety, though, is what this collection strives to comprehend and this, to my mind, means that the investment required to accompany Giannoukos through her ‘long hour’ is worth it.

This entry was posted in BOOK REVIEWS and tagged Anne-Marie Newton, Tina Giannoukos. Bookmark the permalink.
Anne-Marie Newton is a Perth writer whose poetry and prose has appeared in several Australian-based journals (including Island, Westerly, Southern Review), and has been broadcast on Australian national radio. Her poetry has also won prizes in Australian competitions. She holds degrees and post-graduate qualifications in several disciplines, and has recently completed a PhD (Cultural Studies/Philosophy) exploring the thought of continental philosophers, Gilles Deleuze and Félix Guattari.