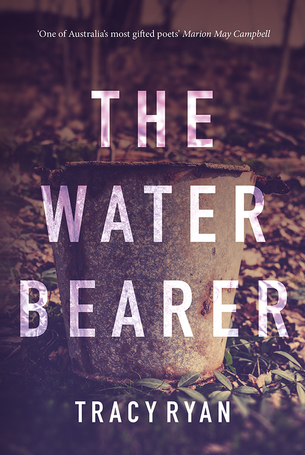 ‘… the poem / will cover a multitude of signs.’ This line, appearing early in West Australian author Tracy Ryan’s ninth poetry collection, can be read as connecting directly to what’s been posited as the very purpose of poetry: to confound or thicken language, to free it from its mere communicative dimension, as Walter Benjamin might put it, and allow it to bump up against things-in-themselves. In fact, this line also bears witness to what the volume as a whole achieves. For the remarkable poetic field that is The Water Bearer sets in motion a multitude of signs and their constellations, but importantly, through the skill of a poet at the height of her powers, also leaves them covered. A line from a later poem (ostensibly about the function of windows) illustrates this achievement differently: ‘Hold threads under tension, a frame.’ With the multiple readings the collection provokes it becomes evident that the volume itself performs as a frame, holding together threads of signs, objects, meanings, but always ‘under tension’: the essential muteness of the outside – the overflow side of language, or what Rilke designated as ‘unsayable’ – feels ever pressing.

The word ‘overflow’ is entirely apposite here, for the volume’s metaphorical linchpin is water. Water, we might think, is a particularly pure element, and could be dealt with more plainly than the muddied subject of Ryan’s previous book, Hoard (the Irish boglands). But purity is not realisable, and Ryan’s rendering of water is a dexterously admixed one. Given her feminist poetics, an Irigarayan notion of fluidity could be expected to drive the work; indeed, many poems do depict the maternally figured intersection of herself and her son. But for this reviewer, some classical conceptual undertones are more perceptible: an Ovidean deployment of water as a symbol of perpetual metamorphosis, for example, and a Heraclitean vision of water as change and flux. Throughout these poems water fluctuates through a concatenation of material forms: snow, ice, storms, vapour, rivers, clouds, household water, swimming pool water, and more. Never a stable entity, neither is water independent: it coexists (as in Ovid) with its elemental counterparts – air, fire and earth – and is explicitly or implicitly manifest in portrayals of how the changing seasons impact both the human and non-human. This attention to the materiality of water and its position in nature fuels one of the work’s marked topical concerns: ecopolitics in the context of the anthropocene. The sequence ‘Self-Supply,’ chronicling some of Ryan’s vexed efforts to live responsibly ‘off’ the scheme water system, evidences, with compelling irony, her committed ecopoetics.

But to return to a larger current: there is a distinct, overarching metaphysical focus on the unrelentingly paradoxical nature of life – for which water acts as a trope. From this thematic superstructure several sub-themes flow, constituting numerous explorations of always/already and both/and situations. Much of the diverse subject matter arises from Ryan’s personal experience, and place is important (the poems’ settings are about equally distributed between the northern and southern hemispheres). But the presence of place is always unsettled / ing: the pressures of time and memory, the eternal return of both newness and loss, and the way travel invokes sensations of both here and there, all put any sense of locatedness under strain. The very first poem ‘Carousel,’ set in the ‘foreign city’ of Paris, establishes some of these motifs: ‘looking out / from my still point, dead as a cyclone’s eye,’ the poetic I/Ryan watches a child spin around her, ‘hurdy gurdy,’ on a roundabout:

A later poem, speaking of a particular ‘sensitive’ plant on Réunion Island, observes the ‘fragility of interface,’ and tells us ‘[e]verything shut will open again.’ In the Australian-situated ‘View from Below,’ whose form (a line by line accumulation of load) superbly matches its content (the damming of rivers), the I, who is ‘aware of the vast loss for every valley flooded,’ acknowledges ‘the arch or edge / we teeter on … .’ If paradoxes are circumstances that suspend us between many possibilities at once, these poems effect the oxymoronic: floating the I again and again between childhood memories and the present, between staying and going, between seasons and lands, between self and other; and on it goes, continuously.

We must, however, acknowledge one realm of possibility that the text seems to move toward foreclosing; in a telling gesture, this matter is brought to the fore at the end of the volume. Holy water – the form of water consecrated by the church – has already been splashed intermittently throughout (‘Christian,’ ‘pagan,’ ‘secular,’ ‘absolve’ ‘unchristened’ are but a few of the cognate allusions), but in the last pages the issue of organised religion is faced head on. These closing pieces (which include the titular poem) autobiographically explore some of Ryan’s early Catholic church experiences: being influenced by Thomas Merton to join (briefly) a convent, enduring the ‘upright coffin’ of the confessional, and being marked as a penitent on Ash Wednesday. Finally, though, in ‘Crossing Myself,’ Ryan announces that the ‘God-shaped’ stoup at the door of the church is wholly bereft of water: it is now a ‘cracked plastic shell, with nothing to offer.’ She emphasises:

Such a vigorous declaration leaves the reader to consider whether this, indeed, represents the resolution of one significant paradox. Does this signify a true stoppage, for Ryan, of the powerful force flow deriving from her involvement with religion? Methinks the poet doth protest too much. The last poem is not the last: the vociferousness of this issue, as covered by the book’s signs, indicates its propensity to live on, for this writer, as a negative demand.

This review leaves much unsaid regarding how The Water Bearer augments Ryan’s already long list of fine accomplishments. Poem after poem here demonstrates beautifully honed linguistic arrangement, haunting affective intensity, and stunning formal control. It is for this unsaid, and much more, that the reader should turn to this volume, many times.

This entry was posted in BOOK REVIEWS and tagged Anne-Marie Newton, Tracy Ryan. Bookmark the permalink.
Anne-Marie Newton is a Perth writer whose poetry and prose has appeared in several Australian-based journals (including Island, Westerly, Southern Review), and has been broadcast on Australian national radio. Her poetry has also won prizes in Australian competitions. She holds degrees and post-graduate qualifications in several disciplines, and has recently completed a PhD (Cultural Studies/Philosophy) exploring the thought of continental philosophers, Gilles Deleuze and Félix Guattari.