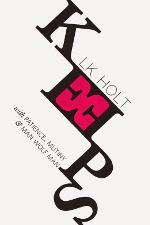 Melbourne poet L. K. Holt’s third collection, Keeps, is an expansively intertextual and complexly layered work. Published as part of a substantial volume that includes the reissue of her two earlier collections, this is often dense and intellectually oriented poetry. There is, however, an intriguing personal thread interlacing the ensemble, wherein the poet – perhaps more so in this collection than in her earlier works – offers a view into some of her deeper existential concerns. Holt dissects these concerns largely by way of close engagement with a diverse range of art works from various epochs – across visual, plastic and literary forms, and from antiquity, the middle ages, through to the present day – all of which push the practice of ekphrasis in interesting directions.

Although Keeps does not follow any overt narrative development, the first and last pair of poems can be read as bookending the whole, in the sense of illuminating its themes and impulses. The opening poem ‘Shark’, for instance, with the epigraph ‘after Robert Lowell’, foregrounds the second generation modernist’s impact upon Holt. This poem is the collection’s only sonnet, which marks a considerable departure from her first two books, and it invokes her muse:

There is a direct connection here to Lowell’s late sonnet, ‘The Dolphin’, in which he too addresses a maritime muse: the more feminised ‘My dolphin’. A number of lines in Holt’s sonnet paraphrase Lowell, but when Holt’s shark rises out of the sea and mouths ‘a skull-shaped vowel’, the shark merges with Lowell himself. Holt’s appeal to Lowell positions him as a kind of mentor: Keeps, in fact, demonstrates a very modernist poetics, and works through many associated motifs, including the making and status of art, the relationship of history to the ‘modern’, the notion of life as flux and change, the impact of war, and the breakdown of the self as rational ego.

If it seems anachronistic that a poet should invoke modernism in our apparently ‘post-post-modern’ age, we can recall Terry Eagleton’s statement that modernism remains an ongoing ontological possibility.1 This is to understand modernism not so much as a temporally confined movement, but as an evolving philosophical paradigm – an ‘atemporal force’ – which has the potential to continue influencing artistic efforts. And, as several theorists have pointed out, modernism as an artistic drive cannot simply be cut off from later developments; indeed, much of the so-called post-modern was already present in modernism, and there is a strong argument that modernism has actually outlasted post-modernism.2 In the mid-2000s, in a new journal dedicated to modernist studies, Marjorie Perloff outlined numerous examples of current modernist activity in both academia and publishing, confirming that it was not only still alive, but flourishing.3. This new wave of modernist studies continues today, not only in terms of readdressing the major texts, but also in broadening the scope of understandings regarding modernism. Perhaps its persistence is a reaction to the post-human turn in philosophy, or, as Madelyn Detloff argues, it may be a contemporary response to present day war, trauma and terror.4 In Perloff’s view, modernism’s passionate ‘art matters’ discourse offers an attractive aura of artistic intensity not available in this age of digital transience.5

Regardless of the reasons (which are sure to be various), modernism is not yet finished, and Holt’s collection contributes to its survival. As well as being thematically connected, Keeps makes use of several of modernism’s innovatory aesthetic tools. Holt’s loosening of the strict formal structuring that prevailed in her earlier works matches modernism’s free verse syntax, and mirrors Lowell’s own adoption, in his middle period, of such techniques. This freeing up of line and metre (in most but not all poems) suits the ranginess of Holt’s references, which, in terms of literature, extend through Keats, Mallarmé, Rosetti, Rilke, Pope, Pound, and Moore – to name but a few. Holt’s citations are both featured and embedded, and indicate not only a modernist, but also a canonical poetics at work. This is perhaps influenced by T. S. Eliot’s edict that the poet should have a solid historical sense and remain moored to the whole tradition of which s/he is but a part. Holt’s appreciable exercise of ekphrasis may be also affected by modernism’s genre-mixing procedures, and there is a modernist emphasis on the materiality of language. She mixes colloquial, invented, and more exalted vocabulary (words such as ‘knackered’, ‘thawthought’ and ‘operose’ intermingle), affirming language as an experimental medium rather than a transparent window.

Eliot saw a simultaneity – as opposed to a progressivity – in the whole of literature; Keeps performs this very notion, and extends it to other art forms. As a whole, the volume works as a collage/montage: its continuous juxtapositioning of art works and time periods has the effect of eliciting contemporaneity, epitomising the post-Enlightenment/modernist conception that the eternal essence of life is nothing other than its non-teleological nature. This collage strategy is also evident in individual poems, most obviously in ‘Between the Bull and the Picador’ – a Cubist-type piece presenting a mélange of Picasso-Goya-man-animal-god interacting in ‘an event many-limbed’; this poem paradoxically conjoins seeming opposites, and ends questioning art’s glorification of the bullfight with the skillful half-rhyme: ‘the artifact, the putrefaction’. Another poem, ‘Lives’, a four-parter whose title calls forth Lowell’s ‘Life Studies’, also displays this aggregated quality. Based mostly around a series of paintings by Dane Lovett, this piece brings together four different art works in an amalgamation of tightly structured and loose-lined poems. The theme of the one versus the multiple is pronounced overall, with one poem addressing this most directly. In ‘“Battle of San Romano”, Ucello’, Holt writes of scrambling the standard view of a Ucello painting (illogically seeing a baboon’s face amidst the battle scene): she thus rejects the dominance of representational thought structures, with their ‘one-point perspective’, telling us she is ‘averse / through tiredness, modernity, / to making any sense of the action’.

Returning to the bookend pieces, the second poem introduces what, to me, is the driving energy underpinning the collection, and sets up its paradoxical tension. The palpably personal (indeed, confessional) ‘Poem for Brigid’ explores an event in Holt’s past, and, in doing so, investigates the theme of innocence and guilt and its relationship to various life stages. The poem ends poignantly:

‘Tomorrow’ can be taken as Judgement Day, a day of flesh-to-spirit transformation with apocalyptic overtones, which is also the subject of ‘Last Outcome’. This latter poem expresses a desire to end the purgatorial conundrum of guilt versus innocence that keeps one awake, tying back to ‘Poem for Brigid’. Both poems (and numerous others) subtly reference Dante’s masterwork, the Commedia. And here is the energy bubbling beneath the collection: there is a sense overall that a quest is taking place, or at least a questioning; that the poet – fully aware of her (and our) ‘sinfulness’ – is examining the possibilities for redemption, within a framework of modernist thinking. Some of the poems alluding to sinfulness include ‘Kneeling Narcissus’, which addresses a Kolig painting and, in ironic tones, condemns the love of the self; ‘The Mother in Three Caprichos’, which, again, alludes to Goya and intimates the slow-burning guilt and suffering endemic to motherhood; and ‘The Doctor’s Morning Swim’, which demonstrates the sin of inactivity, or perhaps fraud – the worst of sins according to Dante.

The word ‘sinfulness’ is redolent of Christianity, and Keeps navigates through plentiful religious imagery and symbolism, much of which relates to the Commedia. In drawing upon the journey of the medieval Christian spirit through hell, purgatory and ultimately paradise, Holt follows in the footsteps of Pound, Eliot, and Lowell, but Holt’s concern appears to be primarily for (her) life today – life experienced in a time that is, arguably, more multiplex than that lived through by these modernist forebears. Just as Dante’s epic begins with his midlife questioning, much is made of ‘the middle’ as a reflection point here. The imagistically skilful “Still Standing in Front of the Painting’, for example, a poem addressing one of Goya’s Black Paintings and linking it to both the Commedia and a poem by Thomas Traherne, speaks of ‘the shade and light [of] midmaking’, whereby in ‘adjusting the angle of your early midlife … mid-traverse, mid-autumn’, it may be possible to invert one’s perception – that is, to see things differently and make amends. In another poem, though, ‘Akho’s Self-Satire’s’ (a pastiche of an original poem by the medieval Hindi poet Akha Bhagat), the middle-aged addressee remains foolish and unenlightened. ‘Maas River Filmreel,’ an atmospherically charged study of a 1948 cinematic work, describes how an old woman walks ‘the midpoint,’ which is to say, ‘walks her soul and its dogsbody’. In much of this tonally dark poem Holt paraphrases the Commedia, but, ultimately, the promise of the middle collapses into the nothingness that is both the past and future. As such, the logic of a resolving teleology is denied.

And this looks to be Holt’s ultimate statement as to the promise of salvation by way of any higher power or truth: that, unlike Dante, we who live in the enduring modern moment do not have this option. After the frequent deployment of archetypal topoi – mountains and water feature heavily, accumulating an ebb-and-flow effect – the modernist tenet that things simply are what they are wins out. The collection’s final two poems reinforce this conclusion. Penultimate is ‘Stages of Balthazar’, inspired by a Bresson film about a village donkey who endures a life of terrible trial. This long narrative, made more effective by interwoven comments from a ‘chorus of elders’, contains some beautiful images, such as this:

The donkey’s stoic acceptance of what occurs, including his death, exemplifies Nietzsche’s call to amor fati, to affirm the dice roll, and the chorus concludes in mots justes:

Nietzsche, a philosophical precursor to modernism and an inspiration for Lowell, can be detected hovering over the final poem as well. ‘Long After Lorca’s “San Miguel” Ballad’ makes use of a García Lorca poem, wherein mules accompany a pilgrimage up a hill outside Granada to visit the hermitage containing the image of the archangel Michael. In spare, uneven couplets, and highlighting the repetition in Lorca’s original, Holt puts an end to the notion of a spiritually rewarding pilgrimage, with imagery evoking a Nietzschean nihilism. The poem begins:

A ‘brackish dawn’ arrives, after which Holt rhetorically challenges the existence of God or of an angel who can protect us from the ‘demon’. In the final couplets, which directly paraphrase Lorca, the writer/reader is effectively splashed in the face with ‘crazed uncovered water / on the mountain mountain mountain,’ water that is ‘cold so no one will touch it’. This jolt of an ending leaves no question of an external salvation that could match our hyperkinetic times (or absolve our personal sinfulness), and subverts the Commedia’s resolution – which, of course, has Dante at the top of the mountain of purgatory drinking the waters of paradise. This poem (as with many others) is not in the voice of a lyrical ‘I’, and yet it still conveys a palpable emotional intensity. (The same holds for the several poems that work through the pronoun ‘you’, positioning the addressee as any person in general.) This technique amounts to a very modernist stretching of the lyric mode, whereby the individual poet’s ego breaks into multiple components, enabling the poetic voice to both meld with a broader contemporary consciousness, and remain potently connected to the realm of intense feeling.

Pages: 1 2
This entry was posted in BOOK REVIEWS and tagged Anne-Marie Newton, Lucy Holt. Bookmark the permalink.
Anne-Marie Newton is a Perth writer whose poetry and prose has appeared in several Australian-based journals (including Island, Westerly, Southern Review), and has been broadcast on Australian national radio. Her poetry has also won prizes in Australian competitions. She holds degrees and post-graduate qualifications in several disciplines, and has recently completed a PhD (Cultural Studies/Philosophy) exploring the thought of continental philosophers, Gilles Deleuze and Félix Guattari.