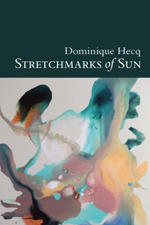 At primary school we had a class called Scrapbook. We drew, coloured, traced, glittered, and glued material cut from magazines, to create new pictures uniquely our own.
I scrapbook.
You scrapbook.
S/he scrapbooks.
We may have made the noun into a verb, but it still has chalk-mark of the hobby or junior project.
Unlike collage, montage, even bricolage – those vaguely French-sounding words associated with literature, film and fine art.
‘Collage, the art of reassembling fragments of pre-existing images in such a way as to form a new image, was the most important innovation in the art of the twentieth century.’ That’s Charles Simic quoted by David Shields in Reality Hunger, a book made up largely of quotations from other texts.

Quotes and paratexts pepper Dominique Hecq’s Stretchmarks of Sun. Seven poems which tilt at the voiceplay. Seven poems that to-and-fro across time and geography. And – like Reality Hunger – deliberately blur the line/s of authorship. Stretchmarks of Sun contains some delicious wordplays, but Hecq also plays with references, with citation, paraphrase and interpretation. Is this literary sampling a subtle – or perhaps not so subtle – critique of academic writing? That was my first thought. Second thought was the kaleidoscope of received ideas; how the mind processes information, and the piecemeal nature of memory …
‘According to Anatole France, it is scissors and glue, and not the traditional pen, that are the true emblems of the writer’s craft.’ That’s
Sergei Eisenstein in The Psychology of Composition. Pioneer of cinematic montage.
Where meaning is created not by the content of an individual shot, but by juxtaposition and patterning, by the relationship of shots to one another. Used by film-makers to condense time, Hecq translates the technique to stretch as well as short-cut time.

‘I was the dust blowing from the interior out/I was the interior ousting particles of dust and/molecules of wind/I was the wind.’ The first poem in the collection, ‘Before I Became a Woman’, reads as a dialogue conducted with/in the self.
A series of rhapsodic fragments.
The voice latching onto specific images or moments before changing register.
This performative quality runs throughout the book; it’s an energising and distinctive feature that brings the past alive in the present. It’s there in the prominent first person. In the theatricality of settings. Where lists transmute into stanzas. Where scenes break into beats. It’s there in the dramatis personae.
Real people.
Fictional characters.
Historical figures.
Ghosts.

In Scrapbook class Miss urged us not to overfill our pictures.
Space could be eloquent.
In Stretchmarks the connectives are fragmentary and the between-spaces are expressive.
‘What am I doing, talking, having my figments talk, it can only be me. Spells of silence too, when I listen, and hear the local sounds, the world sounds …’
That’s Texts for Nothing by Samuel Beckett.
Fracture opens up a dreaming space.
‘Read the energy that is in my silence,’ wrote Clarice Lispector in Água Viva, a book composed of shards that ultimately resolve into a kind of long prose poem.

‘Come to think of it/I might be making it all up//Memories//of someone who never/was.’ That’s from ‘Off the Edge of Love’.
Stretchmarks hovers over genres, makes play with unreliability, and folds together theoretical reverie, memoir and mythologies of multiple types.
Two poems, ‘Unsouled’, and the afore-quoted ‘Off the Edge of Love’, lay bare ‘the sheer business of surviving a child’. Cartographies of loss and breakdown, they are raw, sad and incredibly moving.
When ‘language gaps/splinters into uneven shapes/loses its footing in its own progression –/see how it slips?’
The poems gyrate towards resolution – not narrative, but musical. The way we experience the completion of a piece of music.
Stretchmarks takes the clutter of myth and post/modernism, marries it with ‘autoficional fragments’ and transforms it into something quieter and more thoughtful.
Poems that demand re-reading.
Poems rich in colour.
Poems that are playful with pronouns and proper nouns. Imanuelle becomes Im – no dividing apostrophe.
Poems that explore the kinship between first and third person, self and persona, foreignness and its counter/parts. The dissections of a Renaissance anatomist and the acquiring of a tattoo.

This is erudite writing with a reflexive impulse.
With flashes of humour – in even its darkest material.
Writing with a restless heart.
‘The choices a writer makes within a tradition – preferring Milton to Molière, caring for Barth over Barthelme – constitute some of the most personal information we can have about him.’ Or her. That’s Zadie Smith’s Fail Better from 2007.
In those childhood scrapbooks, we assembled and took apart and reassembled our world, in order to understand it and our place/s in it. Is collage or the gathering of fragments the adult equivalent? A literary approach that best fits our particular digital moment? When much, maybe most of our online reading is punctuated by hyperlinks, adverts and other interactive elements. But then writers were experimenting with short nonlinear forms way before the world turned digital, and poets have always understood the whole ‘less is more’ thing – a phrase which comes from an 1855 poem by Robert Browning.
‘Tell me how will it wear … ’
In the final poem, ‘Wearing the World’, thanks to a gift voucher from her daughter (perhaps also a giver of the titular stretchmarks?) the writer visits a tattoo artist.
‘Everything you ink on people, Shauna says/is already inside them//You only open the skin and let it out.’

This entry was posted in BOOK REVIEWS and tagged Noëlle Janaczewska. Bookmark the permalink.
Noëlle Janaczewska writes performance, poetry and essays. The recipient of numerous awards, most notably a 2014 Windham Campbell Prize from Yale, her poems have appeared in Australian and international magazines and anthologies. Her chapbook-length poem Dorothy Lamour’s Life As A Phrase Book was published by The Wayzgoose Press.