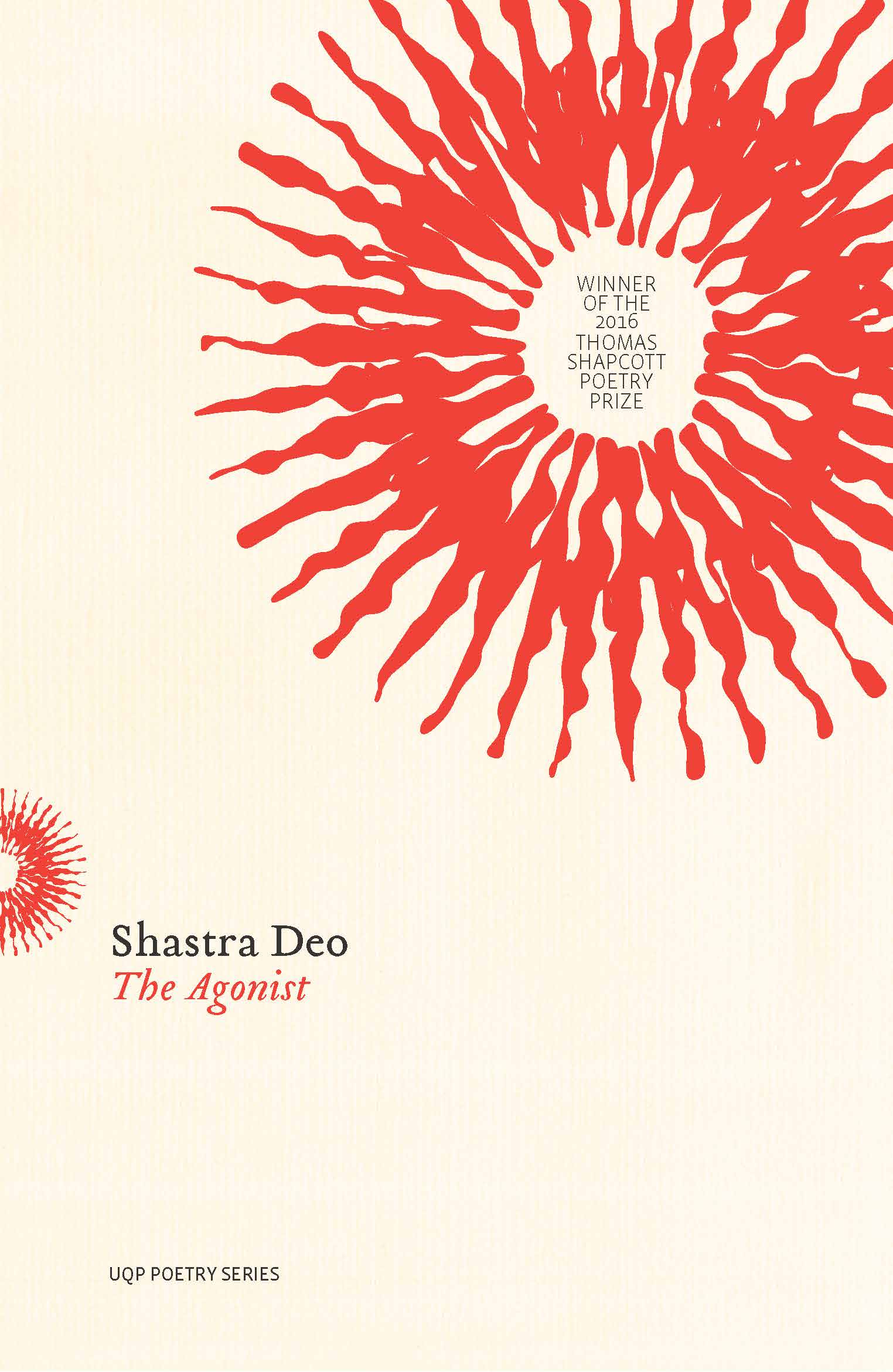 Shastra Deo’s first volume of poetry, The Agonist contains many poems about corporeal life, and about the separation of bodies, problematising the connections between body and thought. The poems often turn the inside out, as it were, opening up a poetic anatomy of internal organs and interior life. They dwell periodically on in-between states – to some extent symbolised by skin, space and emptiness – and they persistently return to tropes of rupture and penetration. As they explore such territory, they tend to alienate usual notions of humanity, asking the reader to consider whether their mind/body assumptions hold true – and intimacy itself is sometimes viewed askance through such perspectives, as in the lines: ‘You may be forgiven/ for thinking that love/ is a butcher’s ritual’. For Deo, it is not so much that the human body has a life all of its own, but that the flesh ‘speaks’, as it were, of human experience and human circumstance in lateral ways.

To give a couple of early examples, the opening poem in the volume, ‘Five’, addresses ‘what lived in the space between/ our bodies, our words’ and the second poem, ‘Scorched Earth’, sets ‘The body/ and the space it occupies’ alight. Following Emily Dickinson’s examples in her poems ‘One need not be a Chamber – to be Haunted –’ (quoted by Deo as an epigraph to one of her sections) and ‘I dwell in Possibility –’, this poem imagines the body as a house. While Deo’s metaphorical and metaphysical concerns are generally very different from Dickinson’s – Deo’s is dominated by the evocation of certain kinds of burning – she is, like Dickinson, interested in notions of haunting and absence: ‘your heart is a house/ with the doors left open’, and there is a ‘stranger roaming the hallways’. Because the narratives in ‘Scorched Earth’ are not explicit enough to give the reader the full context for such expressions, it conveys a sense of scorching and damage, and of failed relationships, while challenging the reader to connect with its uncompromising tropes.

The book also explores the disjunctures of family life and, as mentioned above, various exigencies associated with intimate relationships. As it does so, it adopts what might be understood as a mythopoeic stance towards much of its subject matter, emphasising the strange and unknowable rather than the familiar, and creating various narratives with tropes of violence and loss at their heart. It is not that we cannot know the subjects of Deo’s poetry, but she continuously shifts the focus of her work away from the readily explicable.

This means that even the poem ‘Road Trip’, which starts with an apparently simple idea – ‘In the summer of 1995 my mother and I took/ a road trip’ – soon morphs into a kind of fable, in which the lives of the speaker and her mother, ‘bundled up / in garbage bags’ are thrown ‘into the river’. It is characteristic of Deo that these thrown bags are simultaneously the real thing and a metaphor for change and dislocation. It is also characteristic that the poem introduces a sense of uncertainty and occlusion: ‘I don’t remember the trip back, but I imagine / it must have been like the drive past the redgum wharf’. For Deo in this volume the known, the quotidian and the mysterious are usually entangled, and there is a persistent sense in her work that what is remembered is not the whole story.

Deo uses images drawn from mythology to achieve some of her effects, such as in the lines, ‘My lover, blinded by his tryst / with the sun, crafted cartographies / of the labyrinths in my brain’ and is preoccupied by ideas of divination and ritual. She is also interested in the Tarot, writing a sequence that briefly evokes Ovidian metamorphosis (‘I lived in the woods so long my ankles / tapered into hooves’) before rewriting the symbolism of The Hanged Man, The Priestess, The Emperor and Death. Deo’s alertness in crafting a contemporary and transformative version of these tropes prevents them from being a recycling of received notions and imagery. The Hanged Man, for instance, finds his ‘god in an oil spill, poised / to light a match’ and Death ‘escapes / our mythology’.

Further, the body and written and spoken language are intimately – indeed viscerally – connected in this volume. For instance, ‘Anatomy of Being’ opens with an account of what makes up the physical body, inflected by sometimes unexpected ideas – ‘organs, / constructed of cells and stored in the / dorsal and ventral cavities, lined with / epithelia and ebullience’. The enjambments of these lines are unusual, emphasising prosaic rhythms – suitable to a kind of catalogue – but what is most interesting about the work is its accumulations of abstractions, especially effective in: ‘Rumination held, always, in the / stomach, in its roils and rugae. The / trachea tight with every kept secret.’

There are four poems entitled ‘The Soldier’, depicting someone who remembers ‘the war through crosshairs’ and who was ‘awake when they sawed / through your humerous’. These are complemented by a series of found poems drawn from the index of titles and first lines from The Penguin Book of First World War Poetry. The found poems are quirky and sometimes poignant, but the poems about the soldier address troubling issues connected to the loss of human identity, the manner in which bodily life continues despite alienation and crisis, and the way memory becomes encoded in corporeality:

Overall, this is a thought-provoking debut collection that is perhaps overly encumbered with notes at the end and is occasionally prosaic in its expression, but which addresses serious issues in imaginative and original ways. Deo’s gestures at other writer’s work – for example, she writes a response to Sylvia Plath’s ‘The Arrival of the Bee Box’ – do not always produce her strongest poetry, but, overall, her interest in intertextual gestures deepens this volume’s preoccupations. The Agonist is a book that risks considerably more than many contemporary volumes of poetry, and when these risks succeed Deo creates startling and inimitable poetry.

This entry was posted in BOOK REVIEWS and tagged Paul Hetherington, Shastra Deo. Bookmark the permalink.
Paul Hetherington has published 12 collections of poetry and six poetry chapbooks. A volume of his prose poems, Moonlight on Oleander, will be released by UWAP in June, 2018. He won the 2014 Western Australian Premier’s Book Award (poetry) and was shortlisted for the 2017 Kenneth Slessor Prize for Poetry. He was a finalist in the 2018 international Aesthetica Creative Writing Competition (UK) and the 2017 international Bridport Prize Flash Fiction competition (UK). He is Professor of Writing in the Faculty of Arts and Design at the University of Canberra, head of the International Poetry Studies Institute (IPSI) and one of the founding editors of the international online journal Axon: Creative Explorations. He founded the International Prose Poetry Group in 2014.

One Response to Review Short: Shastra Deo’s The Agonist