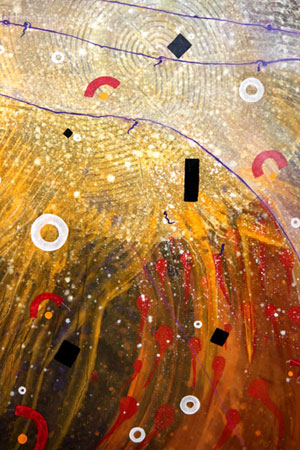 The title of this anthology was suggested to me by Yota Krili’s piece, ‘Angels’. At first, I thought her piece referred to all of ‘us’ who’ve had various struggles, but she explained that she was thinking of the heroic freedom fighters of Greece in the past. It didn’t fit, but it’s a nice connection.

In curating this collection, I asked the writers to provide pieces that are short, edgy, and I’m happy that they have fulfilled that very loose brief. The disrupted texts they’ve produced – whilst having interesting formal qualities – also have poignant emotive qualities. The term I use for what others refer to as prose-poetry is experimental prose because I find that term broader and more inclusive. I asked several visual artists to suggest works that I could take or requested particular works I had already seen.

Some of the contributors are both visual artists and writers. In this instance, most contributors chose to submit in only one form, except for Kit Kelen and myself. My world traverses the visual arts, text, film, education and seven of these contributors are (or have been) teacher-practitioners. That means they’ve had to articulate what they’re doing as practitioners and also present ideas about what other authors and artists have done. As well as grappling with education, many of them have worked in small press publishing, translation, writers’ organisations and/or have been activists, working to enhance the fields they work in. I see most of these contributors as transcultural and hybrid in various senses.

I have come across and worked with most of these contributors in various contexts – in writers’ organisations, in Greek cultural forums, in women writers’ groups, in small presses and in transcultural translations. Carol Archer, Kit Kelen, Virginia Shepherd and I are currently involved in a collaborative visual/text postcard project called Elsewhere.

The sculpture of Hilik Mirankar is familiar to me because we live in the Queen Street Gallery that is a street where all our neighbours house his works on their front balconies. His studio is also part of our home.