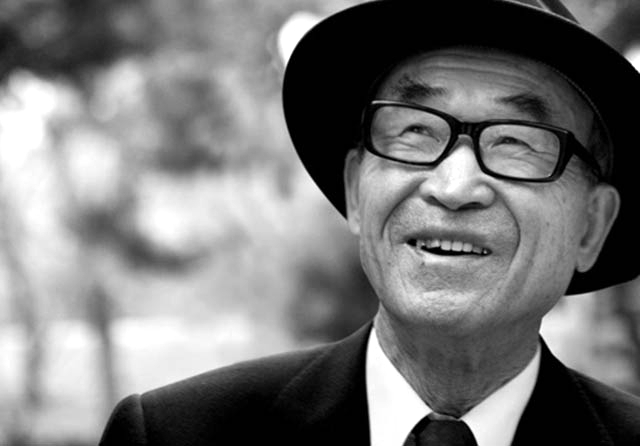 On a hazy autumn day in Seoul in October 2009, David Prater spent an all-too-brief hour with Ko Un, one of Korea's best known poets and the author of a true twentieth century epic, Maninbo [Ten Thousand Lives]. Ko Un's chief English translator An Sonjae acted as interpreter during the conversation, which ranged across various topics including silence, epic poetry and democracy in the twenty-first century.

David Prater: Ko Un, first of all thank you very much for agreeing to meet me today, it's a great honour for me to meet you in person. Obviously the basic facts of your life and works are well-known, but I’d like to ask you about the period of your life when you first started to write poetry in the 1950s. In your introduction to Songs for Tomorrow: Poems 1960-2002, (LA: Green Integer, 2008) you talk about the idea of the ‘Zero’; as being very prevalent at that time in Korea. For people in Australia who might not know much about Korea and what was happening then, can you tell me something about why that idea was so prevalent and why you might later have rejected it?

Ko Un: At that time it was just after the Korean war, everything was destroyed. I was a survivor surrounded by ruins and emptiness, and an orphan. So therefore it’s not just my poetry or myself personally or something, it's that the whole world seemed to be nothing but zero, a mound of ash. So my poetry begins in the midst of this zero, and me being this naked survivor, so to speak. And when you come to the present time, I can’t tell with this zero whether I”ve moved in a plus or a minus direction but in the present too it’s always a matter of starting again, starting again from a zero, again from nothing, to always start again from that, as it were, ground zero.

DP: You spent a decade as a Buddhist monk – is that a Son or Zen Buddhist concept?

KU: Buddhism for me is like food I ate for ten years, for a long time as a monk, and the food you eat goes to your bones and stays there, so in that sense it's inside me, it's not that I wouldn't be identified by Buddhism but it's there, a part of me … Buddhism has this emptiness and in opposition to it the 'is-ness', but the zero concept – there's nature, there's the whole existence of the universe but that itself for me is a part of the zero.

DP: In an interview with Patricia Donegan for Kyoto Journal in 2005 you described the Korean people as 'a poetic people' – not just in terms of actual poetry but in the way that they live their lives. In your childhood, what was people's attitude to poetry? Was being a poet seen as a viable or respectable occupation, or was it a punishment or curse?

KU: I had left home and I was lost. This is a process of loss, to have left home is to have lost home. Looking back now, the people there – my mother, father, grandparents, uncles – none of them were literary people but the way they spoke, the way they lived, their speech and everything was full of poetry, making them in a sense better poets than I am now. But looking back at that as a lost reality, it's no longer there and you can't go back. So at present I have this sense of having lost something, of having been deprived of something, it's no longer there, due to the process of modernisation.

DP: On that topic, of course, a big factor in the early twentieth century for Korea was the Japanese occupation. You write about having to learn Japanese forms and Japanese stories, having to speak in Japanese, given a Japanese name (Dakkabayai Doraske). You write that these Japanese influences were 'like splinters embedded deep within me'. Do you think it's possible for these splinters to be removed, or negated?

KU: Of course, originally, a lot of what's Japan came from Korea, it was one reality and one culture. But then they changed, over a process of time they changed and then in recent times they became more and more aggressive, as it were, more outreaching, taking over and attacking. And so when I was born and grew up it was under Japanese rule and I had to take a Japanese name and learn Japanese, so in that sense there is within me that wound of having undergone the Japanese colonialism. But at the same time even in that period I had the chance of learning to write in Hangul, so that when in 1945 liberation came, I was virtually the only child, the only person of my age who was accustomed to writing and reading in Korean, so in that sense I was powerfully less influenced than most of the people who grew up in that time. I was taught in secret, in the village, by my neighbours and relatives, and could mature myself in writing in Korean.

DP: You've described the manner in which you lost your hearing in the early 1950s. Speaking as someone who also experienced hearing loss as a younger person, this is something that's very interesting for me, and it seems that it's a very important aspect of your work. Despite the loss of hearing your poetry emphasises sound and focusses on words that have sounds, the sounds of rivers and waves, for example. To what extent is hearing and sound still a part of your experience of the world? To put it another way, in the attempt to block out the sound of the experiences around you, is it true that you turned inevitably inwards? Was this how you approached your writing from that time onwards?

KU: [offering a handshake] I'm glad to meet somebody else who's had hearing loss. I once met somebody who originally couldn't hear at all and developed hearing later. We reached the conclusion that you have to come to accept this world as a world of noise and sounds. For the person who hears and then no longer can hear, then the sounds heard remain forever inside that person. Such a memory in some cases might grow weaker and fade but in other cases might grow and increase. So that's right, I have these memories of sounds, of wind and sea more strongly than other poets would have – it's the memory. Because on one side there's no hearing, on the other side it's only an artificial eardrum, so if you take that away I am completely left in silence.

DP: It seems to me that the noises of the world are very important in your poetry but that there is a deep, I guess profound silence in many of your poems. Can you perhaps put into words what that silence is, how it feels?

DP: Moving onto another topic, Brother Anthony describes how you travelled by boat to Cheju-do, and it reminded me a little of the story of the Dutch sailor Hamel being marooned there, or even of Gulliver landing on Lilliput. Can you tell me a little bit about your experience of living on Cheju? Would you say it is a different place from mainland Korea?

KU: I had a dream that Brother Anthony and I would visit various islands around Korea once, but we're all a bit busy and old now! Going to Cheju-do, some people go to an island on a kind of quest but actually the real reason I headed to Cheju-do was that I intended to kill myself by jumping into the sea before I got there, so I wasn't really setting out to get to Cheju-do.

KU: When I went I didn't realise, but arriving in Cheju-do I realised that it's not just beautiful nature but that in 1947-48 there were these terrible massacres by the rightists in Jeju-do, so arriving there I discovered these great deep wounds left by the experience of history. So I feel that during the three years I spent in Cheju-do, I was the Lilliputian, the small guy. I am very sad, because in those days there was still a sense of an ancient tradition surviving, its own language and culture, but now it's all been developed, transformed, it's gone.

DP: I visited Cheju last month and that was my experience of it also. That there was lots of resorts, hotels. It still seemed to me that there were ‘real' Cheju people living there but that perhaps they are being passed over by history …

DP: Turning now to Maninbo [Ten Thousand Lives], your recently-completed master work, which I'm very interested in reading once the final volumes have been translated into English. Why 10,000? Does that number have a special significance for you or for Koreans?

KU: It's not arithmetic, it's like in The Arabian Nights where the 'thousand and one' means 'lots', or 'many'. In Korean and Chinese, again, it's a way of expressing a large number, a lot of people – more than a few.

DP: Would you describe Maninbo as an 'epic'? Is it one poem or is it ten thousand poems?

DP: Wonderful! Would you say that Maninbo has a style or form that is different from your other books?

KU: Each poem is different, each poem is about a different person, so in each poem I have to find the style or form that's suitable for what I want to say about that person, so it's multiple in style and form. I'm not interested in form – the subject makes the form.

Pages: 1 2
This entry was posted in INTERVIEWS and tagged An Sonjae, David Prater, ko un. Bookmark the permalink.
David Prater was Cordite's Managing Editor from 2001 to 2012. His first poetry collection, We Will Disappear, was published by papertiger media in 2007, and Vagabond Press published his chapbook Morgenland in the same year. His poetry has appeared in a wide range of Australian and international journals, and he has performed his work at festivals in Australia, Japan, Bulgaria, Canada, the United States, the Netherlands and Macedonia. He has also undertaken two writers’ residencies in Seoul, Republic of Korea, and has worked extensively as a teacher, editor and researcher. He currently lives in Stockholm, Sweden.