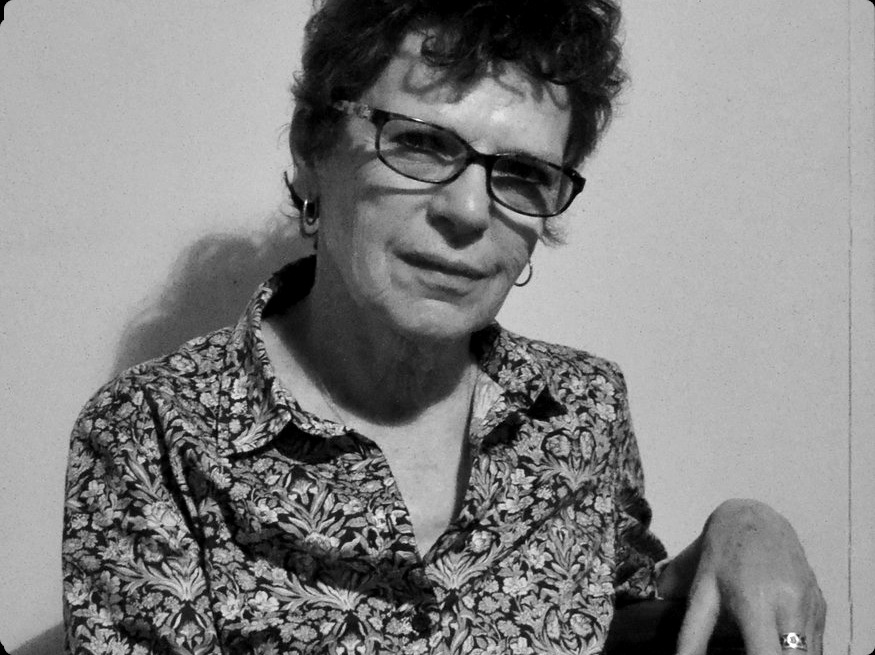 In February 2021 I interviewed Marion May Campbell as part of my ongoing research into contemporary feminist creative practice. This text is an amalgamation of the interview that also includes my poetic and critical reflections that emerged as I was transcribing. Many thanks to Marion for her generosity in being open to the interview and the resulting form of our exchanges.

I am nervous before our interview. Deciding what to wear, what kind of impression I will make. The day I drive to Drouin, Victoria, it is raining. The route is straightforward. All the way down the M1 until the turn-off. As I drive my body becomes attuned to the rhythm of the windscreen wipers, monitoring the fog inside the car, the tinny sound of 621 Radio National cranked loud so I can hear two interesting pieces: one about Biden’s Catholicism and another about QAnon.

I came to Marion’s work via her book Fragments From A Paper Witch (2008). I was captivated by her facility with form, how she could shapeshift via words, her serious playfulness, the contrast between density and sparseness in the pieces within this collection.

It is midday when I arrive. Marion is incredibly warm and gracious. She has prepared lunch for us to share before we do the interview. We chat, both a bit nervous I think, finding our way to common talking points. In the back of my mind, I am hoping the conversation doesn’t get too juicy, that Marion doesn’t deliver any gems. Hold off, Marion! We are not yet recording.

We eat veggie frittata and a salad made with fresh leaves, shavings of radish, a tangy vinaigrette. I am not sure whether to put the salad on the same plate as my frittata or on a side plate. I opt for the side plate. Have you had some cheese? Marion asks. Yes, I thank her I have been helping myself, a selection of hard cheese and a melt-in-the-mouth blue. The food is delicious. It reminds of the meals my friend Jude, who lived for more than fifteen years in France and met a French man and cooked for years for French people who, she said, could be particular about their food, would prepare. Always a fresh salad. Always bread and cheese after the meal.

After lunch, we move to a different room. We take cups of tea and set up at a table. Marion’s two beautiful dogs settle in across the room to wait. I click my little voice recorder and ask my first, awkward, self-conscious question. Then the conversation opens and we talk, easily, for nearly two hours.

MMC: Well, I guess primarily […] I’ve written in response to, or in response to reading […] some fiction writers, but especially some poets […] that have really impressed me from the beginning.

So, So, you know, I, I wrote some kind of bad passionate poetry in response to what I was reading and whatnot

and I suppose a lot of that early sort of – it was mostly poetry, but sometimes sort of textured prose that you might call poetic prose or prose poetry – it sort of then increasingly became a response to events in life, you know, reactive responses

Throughout our conversation Marion constantly refers to other writers. Writers whose work was formative and influential for her. Writers she admires. Writers she has mentored. Writers she is reading now.

MMC: but usually […] displacing things through, you know, metaphor and whatnot, because […] I like to [draw and] paint and I think I’ve always let images – let [the] image-logic – drive my work. And, um, with the couple of [fiction]pieces that were first [published] – well they were written up from notes I took in France when I was doing a

[…] maîtrise there, which is a kind of pseudo-masters. It’s like an honours degree, really, but it was called a masters. […] Then, when I returned to Australia, […] pregnant with my first child Morgan, the skateboarder, I wrote these up and I thought, well, they kind of work as a fiction and I [submitted] one of them into […]Westerly and Margot Luke, the editor, who was [a] German lecturer

and also a writer (beautiful writing, but she didn’t write very much because it was too painful, what she was trying to do – [fictionalise her personal experience of the Holocaust]), but anyhow, she was an editor for Westerly and she was enthusiastic. And she said, But where’s the rest? And that really gave me a kind of permission. I thought somebody wants more. That’s amazing.

Pages: 1 2 3 4 5 6 7 8
This entry was posted in INTERVIEWS and tagged Emilie Collyer, Marion May Campbell, Morgan Yasbincek. Bookmark the permalink.
Emilie Collyer Emilie Collyer lives in Australia on unceded Wurundjeri land where she writes poetry, plays and prose. Her work has been published and presented in a broad range of contexts, locally and internationally. She has published one poetry collection Your looking eyes, two short fiction collections, and her award-winning plays include Contest, Dream Home and The Good Girl which has had multiple international productions. She is a current PhD candidate at RMIT where she is researching feminist creative practice.


More by Emilie Collyer on Cordite Poetry Review →
Throughout her work, Marion Campbell has tried to challenge the politics of representation through a poetics of resistance – in poetry, (third body Whitmore Press 2018; Fragments from a paper witch Salt 2008, a finalist in the 2010 Adelaide Festival Literature Awards: Innovation), novels (the most recent of five being konkretion UWAP 2013), playscripts, and memoir (The Man on the Mantelpiece UWAP 2018). Her novels have been shortlisted for Australian awards and twice for the Canada-Australian Prize, with Not Being Miriam winning the WA Week Prize for fiction back in 1988. Her critical monograph Poetic revolutionaries (Rodopi 2014) explored intertextuality and subversion. She supervises graduate writing projects at Deakin University.


More by Marion May Campbell on Cordite Poetry Review →