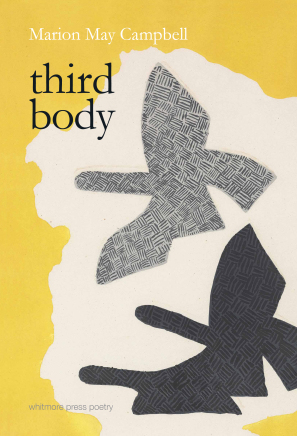 Third body takes form on the cusp of metamorphoses between species, ecosystems, technologies, existential planes, and even between art and artist. ‘passing’, the title of its first section, becomes a motif of the entire collection – perhaps most significantly for its variety of meanings. Passing can indicate a liminal phase in journeys bound by space or time. Passing is a euphemism to tactfully describe the transition between life and death. Passing may also represent social transition, such as one’s perceived conformity—or lack thereof—to socially defined binaries like gender and sexuality.

As a scholar of French Literature and avant-garde practices, Marion May Campbell deftly weaves principles of European postmodernism and academic theory into her work to produce an incisive post-structural commentary. The sensibilities of l’ecriture feminine, à la Hélène Cixous, are evident in the inspiration that Campbell draws from female literary figures such as Gertrude Stein, Sylvia Plath and Anne Carson. These are uniquely synthesised with her own eco-poetics and perspectives of marginalisation and globalisation in current-day Australia. The beach serves as common backdrop to these considerations, as demonstrated in ‘semaphore’, where the paradox of human disconnect is conveyed through mismatched flag signals:

Le sujet en procès, the subject (or the self) in process, is also a key postmodern feature of third body, given its ironic self-awareness despite an inherent tenuity of ‘self’ as a concept. The collection presents a challenge for the reader to gain purchase on its subjects in a concrete sense. One moment, we are enveloped in the consciousness of a dog, and the next we may find ourselves as a cat, a painting, a map, or even amid a poem’s own inception on the page before us. This ephemerality, however, works to keep the reader keenly on their toes and open to endeavour of thought:

Mise en abyme, an image mirrored continuously within itself, is another technique that Campbell employs, particularly in the ‘incipient foredune’ section. Ecology is a strong focus here, where each poem represents a different layer of the coastal vista characterised by uncertain vicissitudes but unwavering resilience, as fragile yet unforgiving. For example, ‘in the slack’ allows us to experience the environment in a tactile manner:

The final poem in this section, ‘U₂: romance of the sonic survey’, personifies both the setting and the poem itself to merge sensation and environmentalist commentary alike:

The impact of mise en abyme as a poetic function is something to the effect of a Matryoshka nesting doll brought to life, where each segment bears its own significance—its own story-within-a-story—to what lies at the eventual heart of a broader collective narrative. The ‘incipient foredune’ section also effectively highlights Campbell’s Rimbaudian influences, both in her symbolism and the synaesthesia of her language choices. The unpredictable sensory confusion of third body adds to the constant ‘shapeshifting’ nature of her subjects. Nothing in the collection is immune from sentience – that is, from becoming a third body. This idea is playfully demonstrated in the dreamlike dynamism of ‘if not in paint’, where subjects are not bound by the constraints of their original medium:

Campbell’s use of colour keeps us suspended in the realm of visual art, only for this to be subverted at each turn with incongruous senses such as sound, movement, and texture. The sequential references to pages not only make the reader aware of themselves literally turning the pages of the poem, but also play into the notion of a self-aware subject progressively ‘painting’ their own narrative. Campbell’s ability to imbue fresh perspective and surrealist humour into once-static images is also evident in her ekphrastic piece, ‘Dorothea Tanning’s Guardian Angels’:

As a highly intertextual collection, Campbell provides a unique intersection of creative and academic concepts. Her work is not only referential of other poets and artists, but also incorporates Freudian psychodynamic theory, philosophical principles in its self-aware ineffability, and knowledge of native flora and fauna as sourced from the Ngaruk Willum people of Port Phillip Bay. Campbell demonstrates the strength of intertextuality in producing a highly-informed collection of transgressive poetry. She holds a mirror to the concept of milieu, not simply as defined by social context, but in its literal translation – a middle point.

Pages: 1 2
This entry was posted in BOOK REVIEWS and tagged Alex Creece, Marion May Campbell. Bookmark the permalink.
Alex Creece is a writer, poet, student, collage artist, and average kook living on Wadawurrung land. She also tinkers with other people’s poems as the Production Editor for Cordite Poetry Review. Alex was awarded a Write-ability Fellowship in 2019 and a Wheeler Centre Hot Desk Fellowship in 2020. A sample of Alex's work was Highly Commended in the 2019 Next Chapter Scheme, and she was shortlisted for the Kat Muscat Fellowship in 2021.