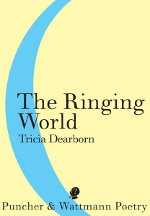 Amidst its many echoes, the idea of a ‘ringing world’ conjures up for me a line from Sylvia Plath’s poem ‘Words’, in which words are axes ‘after whose stroke the wood rings’. This ringing takes the form of words’ echoes travelling off like horses. Late in the poem these horses reappear ‘dry and riderless’ but nevertheless continuing on with their ‘indefatigable hooftaps’.

As well as echoes, resonances and ripples of the figurative in Tricia Dearborn’s poems, ringing suggests the clarity and precision of her writing. As an editor, Dearborn knows the power of compression and distillation. The collection’s ringing world is a place of clarity and clarification: the notes of a bellbird across trees, or, as ‘The Changes’ describes, the many bells that enclose the stages of our days and lives and lead us from moment to moment. Some bells are like the kiss that rings true: ‘the shock of the extra-early alarm on the day of the journey’, ‘the sudden shrilling of a schoolroom bell, calling me in/to a strange new lesson’ and the ‘tardy dinner gong/summoning me to a meal/of scent and heat’. Other bells, like Slessor’s, ‘coldly [ring] out’ alongside human experience, sometimes coinciding with its shifts and sometimes jolting us into change when, to use Dearborn’s metaphor, an old life ‘shivers and falls’ from us.

Many of Dearborn’s poems are about moments of breakage, with the possibilities and challenges of new lives shimmering beyond them. While an old life may fall away, though, shards remain. In ‘Projectile’ a cup thrown at a wall might not appear to injure anyone, but a fragment of glass from the street outside comes, instead, to ‘nest deep in the sole of my foot’, again like a truth that can’t be hurtled away; one that lodges instead in ‘angry flesh’.

The experience of the body and its memories is central to many of the poems. Several of these sensual poems have been previously anthologised and acclaimed, such as ‘Sweeping’, in which the poem’s speaker addresses a closely-observed ‘you’ she notices on a number of occasions when driving down a certain street. The poem unfolds into a subversive fantasy in which the woman sweeping the path with her hair in curlers and a scarf tied over them is seduced by the speaker: curlers removed ‘one by one … with tender fingertips’ before the speaker makes ‘a crisp lush bed’ of leaves where the lovers take their pleasures: ‘my fingers in your curls for all the neighbourhood to see’.

Later, the experience of a scan, or a sister’s loss of a baby chart darker areas of the body’s – and heart’s – experience. The sequence ‘The Quiet House’ is a brilliant, sensitively-observed portrait of a family in mourning. Another of the collection’s highlights is its love poems: also crystalline, unflinching, clear.

Yet another of the many likeable aspects of this collection is its whimsy. Such poems demonstrate poetry’s capacity to turn things upside-down, and the way poetry provides ways of seeing things afresh. ‘Chalk Speaks to Cheese’ finds the former declaring to the latter, amongst other things: ‘Extraordinary, what you make of the calcium we share’.

In Charles Bernstein’s Attack of the Difficult Poems he writes about the perception of poetry as a difficult art. Bernstein considers what would happen if this could be changed, and people could be as hospitable to poems as poems are to people. He imagines the poem with its invitation to readers, to find in themselves:

a willingness to consider the implausible, to try out alternative ways of thinking, to listen to the way language sounds before trying to figure out what it means, to lose yourself in a flurry of syllables and regain your bearings in dimensions otherwise imagined as out of reach, to hear how poems work to delight, inform, redress, lament, extol, oppose, renew, rhapsodize, imagine, foment.

In The Ringing World, Dearborn’s poems – with their beguiling hospitality – hold out just such an invitation, and reward the reader with a world of clarity and resonance; of wisdom distilled and whimsy set loose.

This entry was posted in GUNCOTTON and tagged Charles Bernstein, Felicity Plunkett, Tricia Dearborn. Bookmark the permalink.
Felicity Plunkett is a poet and critic. Her debut collection Vanishing Point (UQP, 2009) won the Arts Queensland Thomas Shapcott Prize and was shortlisted for several other awards. She has a chapbook Seastrands (Vagabond, 2011) and is the editor of Thirty Australian Poets (UQP, 2011). Her new collection, A Kinder Sea is forthcoming.